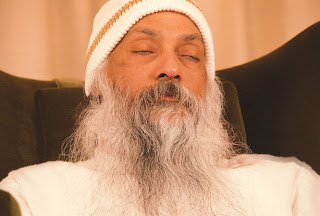 [The groupleader says: I’ve been a leader in theWest… I’ve never had anyone to account to. I started to look at what I’m doing, and I realise that a lot is wanting to please you, to get your approval. I think that was important for me. The marathon seemed to be turning out better for the leaders than for the participants, from my point of view.]

Osho – Mm mm, I understand. I was thinking that it was going to happen that way, because you have been working on your own. Of course you could have more freedom that way, and there was no one you were accountable to. So it was easier; you could do things more spontaneously. I am here, and that was constantly in the background. That became a problem for your leadership. You could have dropped it – and then it would have been a great maturity for you.

To be free in the sense of being irresponsible is not really freedom. Being responsible and free has something of tremendous value in it. Responsibility becomes a growth for you too, so not only the participants, but the leader too is part of the whole group. If you are working on your own you don’t grow through it – you can’t, because you remain outside. So you help people – you push and pull and manipulate and force, and you create an urgency in them – but you remain an outsider. That’s what I have been feeling, not only about you, but about all the groupleaders who have come here – and many more will be coming.

When they are dealing with others’ problems they are very true to the point; they know exactly what should be done. But when it comes to their own problems they completely forget their own advice, their own wisdom. I wanted it this way so you become aware that you still have to grow.

Sometimes helping others can become an escape, because you forget your own problems. There is no time or space to think about them; so many people, so many problems that you have to solve. You always have to be the wise guy, so you remain outside. How can you bring up your own problems? If you do, it will be difficult to help others, because they become unconfident about you. So you have to pretend that you are absolutely certain about what you are doing. The act helps others, it certainly helps, but for your own growth it is poisonous.

By and by you will forget completely that you were acting. Your problems will remain in the unconscious, waiting, but by and by you will stop looking at them. In fact you will avoid them whenever they come up. This is not only for you, but for all groupleaders. This is so for [the Primal Therapy leader, who is also present]. She is perfect in helping others; then her technical knowledge functions. But when it comes to her own problems all technical knowledge flops.

I wanted it to become difficult for you because only then can you become aware that helping is good, and being of service to people is good, but you should not be lost in it. It is your growth, finally, for which you have to do something. In this group suddenly you were not a leader but a participant too, because I was waiting outside the group. I was forcing you into the group, and that became the problem, and because of that you were not so certain about yourself. That’s why you thought that the group was average, below average, but it wasn’t. The leader wasn’t perfectly a leader. I was pulling your leg. The group was perfectly good, but you were missing your confidence, so your problems were coming in.

That’s how I managed the whole thing. I had forced Sudha to be in it, with Asha there too, and you were in trouble. One woman is enough to create trouble, but your beloved and your ex-wife were both there. They created much trouble; not that they created it, but their presence was there – watching you, watching where you were going, and what you were doing. And on top of it, I was watching continuously! So I know it was difficult, but it can become a ’very very valuable insight to you.

Next time simply relax. You need not be worried about my approval. What you do is not the point, but what you are. Whether you do or not, succeed or fail, is irrelevant. My approval is unconditional, and you can rely on it. You can be a failure and rely on it; you need not bother about being successful. So next group, rather than working on your own, allow me to work through you, and then you will see the difference. Just work as a vehicle. Whenever you feel hesitant or uncertain, close your eyes and remember me. Suddenly you will feel a bridge between you and the sannyasins.

You have been working with other types of groups, and this was totally different. You belong to me, and they all belong to me. Other groups were all individuals. They were crowds, because each individual existed separately. This, for the first time, was a group, because the sannyasins are not a crowd. They belong to me, and are my family. They have a certain affinity with each other; That also created trouble – the group was bigger than the leader.

You could have tackled each individual easily, but it was not simply a group, mm? This time you made it a problem, and that was your mistake. You could have used it. This time you thought I was coming in between, because they repeated my words, hid behind them. So it became a problem for you – but next time you can use it.

In fact anything that can become a hindrance can become a help. The same stone or rock on the path can become an obstacle or a stepping stone. If you can struggle a little and climb’ the rock, you can reach a higher point of vision – and through using the rock. Next time use me, and then you will see that they are not hiding behind my words. You also try to become my vehicle, and then suddenly you will see there is a bridge, and you will never again find such a beautiful group.

When you go on working with groups, with people, a certain subtle ego goes on being strengthened. Drop that ego. Next time work as my vehicle, my medium, and just be instrumental. Don’t let [yourself] be there, but just my sannyasin helping other sannyasins. You need not be a leader really, but at the most, a catalytic agent. Then you will see a totally different phenomenon arising.

But it was going to be like this for the first group. Next time relax, mm? and work totally differently, and much will happen. Much has happened in this group too. I will ask people now individually, and you will realise that much has happened, but you were so worried you could not see it. Wait here…