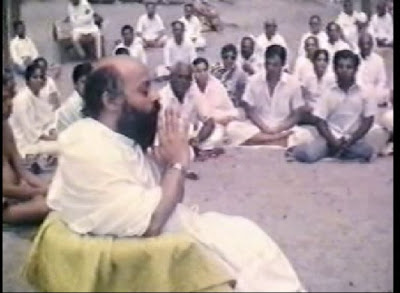 Osho – I have heard a story. A wasp made its abode near a window outside a big building. In winter this wasp would sleep and rest, in summer it would fly, dance and collect the pollen of the flowers. It was very happy. But this wasp was a special one – it was a thinker. It used to think a lot and used to look down upon other wasps because there was no thinking in their lives. Their lives were full of desire.
They never did any thinking, they never contemplated, they never knew the scriptures. Sometimes it used to fly into that building also. It loved that building. The people visiting the building seemed to it of its own type because they were thinkers. Actually, this building was a big library. Professors, teachers, writers, philosophers, poets used to come there. Usually people used to drive out the wasp but it always would come back.
Gradually it started reading and writing. It started in the children’s department and soon it was studying big books of philosophy. It began to read big volumes of science and poetry. It became very proud and just could not tolerate the other wasps – they seemed very insignificant. It became very egoistic. It was thinking day and night. It forgot all about dancing in the sun, flying in the air and visiting the trees. Now mostly it used to sit down engrossed in deep thoughts like, ”Who made this world? Why was it made? From where has this existence come and where is it going?” It used to think about these serious questions all the time.
One day it was reading a book on the science of aviation. It was written in that book of aerodynamics that the body of a wasp is heavier than its wings, so theoretically a wasp cannot fly because its wings are small and weak and the body is big and heavy. On reading this it became confused and puzzled.
Up to now it did not know that its body was big and its wings were small. It was the first time it had learnt this and, of course, whatever is written in the scriptures cannot be denied. It is not possible to go against what is said by the scientists. It became very sad. That day it did not fly back to its hive, it arrived there by crawling. How was it possible for it to fly – to do something which was quite against science? It became very sad and stopped moving about altogether.
It still saw the other wasps flying around, going to the flowers, but it thought that they were doing so out of ignorance – how can a wasp fly? Its wings are small and its body is big. It was full of pity for those who were flying because they did not know the facts of science. If they knew they would have stopped flying.
But one day a bird attacked the wasp, intending to eat it for breakfast. In its nervousness and confusion the wasp forgot all about the scriptures and flew away. It sat on a bush, rested a little and became calm and realized that it had flown! ”I was thinking that a wasp cannot fly but I have flown, so there must have been a block in my mind stopping my natural capacity for flying which melted in the moment of danger.”
It had read about mental blocks in the mind in a book on psychology. So it started flying again from that day. It gave up the knowledge of scriptures from that day, and from that moment it again became the wasp – the natural wasp! From that day it became free of knowledge and stopped looking down on other wasps. That day it experienced its true nature.
Religion is freedom from knowledge, and in that freedom is the ultimate knowledge. The scriptures are not meant to make you lame but to give you the capacity to fly. If the scriptures have made you lame, then it is sure that you have misunderstood them or you have interpreted them wrongly. If the scriptures have made you sad, then you must have missed something in them or must not have understood them properly. The scriptures which have snatched away your natural capacity to fly or flow are not your friends – you have turned them into your enemies.
A scripture is a scripture only if it gives you freedom. A scripture is a scripture if it makes you natural. A scripture is a scripture if it does not fill you with condemnation for others and is able to make you realize that the divine is hidden also within them.
Source: from Osho Book “The Great Transcendence”
Pin It