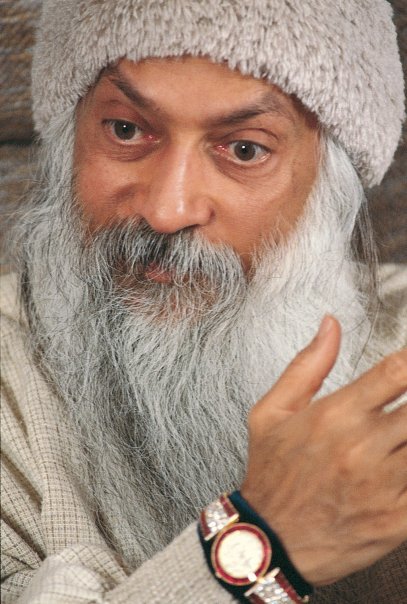 Question – BELOVED MASTER,
ARE YOUR SANNYASINS ALL REBELS?
IS IT TRUE THAT A REBEL IS BORN AND NOT MADE?
OR ARE WE BORN REBELS BUT TAMED AND CONDITIONED BY OUR SOCIETIES?

Osho – Jivan Mary, one who is not a rebel will not come close to me. The very fact that he comes close to me, becomes an initiate, is proof enough that he is a rebel. All my sannyasins are rebels; no other kind of people can be my sannyasins. Those who are not rebels are going to be against me, because whatever I am saying goes against the whole past of mankind — all its traditions, cultures, civilizations, religions.

Unless one is ready to disconnect himself from the past and the shadows of the dead, he cannot become a sannyasin; because my sannyas has no past, it has only future. It has no connections with the past, it is discontinuous with all that is old and dead. Its only concern is for the future growth of your being, your consciousness, your whole individuality.

That’s exactly the meaning of being a rebel: to live according to your own light, howsoever small, and find your way in the unknown future. Give all the opportunities, accept all the challenges of the unknown fearlessly, as if you are the first people on the earth.

The past is a burden, and if you are attached to the past you cannot move a single inch. You are burdened with a mountain, your potentiality is going to be crushed. That has been happening for centuries — people are living so burdened, so conditioned, that there is no possibility for them to be themselves. They are Christians, they are Hindus, they are Mohammedans, but they are not themselves.

My sannyasin does not belong to any ideology, to any philosophy, to any theology. He is pure of all that is rotten, he is pure of all that has passed; his eyes are fixed on the future. And he is seeking and searching his own growth without any fear of the crowd, the masses — which don’t have any individuality of their own. They are sheep, a crowd of sheep. My sannyasin is a rebel. He comes out of the crowd, stands alone like a lion, finds himself — his path, his dignity, his freedom.

You are also asking, “Is it true that a rebel is born, not made, or are we born rebels but tamed and conditioned by our societies?”
Jivan Mary, a rebel is born, not made. In fact, nothing that is significant in human life is manufactured, is made. It is all intrinsic, inborn — you bring it with your life into the world. But you are born in a society, in a crowd; and that becomes a calamity, because the people you are born among and the people you will be growing with have no respect for individuals, particularly for children. They think that their children are their possessions, and their whole effort is to fulfill their own incomplete ambitions through their children.

And this idea of living through children is immensely dangerous. It means you will not allow the child to be himself — he has to be somebody that you want him to be. And you cannot have any idea… there is no way to find out what the child was going to be if he were given freedom and support just to be himself. You help the child but you help the child with a condition, spoken or unspoken, that “You have to be the fulfillment of our desires, the representative of our longings, the completion of our ambitions.”

That’s why nobody is what he was meant by nature to be — he is somebody else. And you cannot be happy with being somebody other than yourself. You can pretend, but you are only playing a role imposed upon you; you are not being authentic and original. If you are a Catholic, can you think that if you had been left alone by your parents and the society, without any imposition to be a Catholic, you would have been a Catholic? Then the whole sky is open to you, to choose.

If you choose according to your own inclination, according to your own intuition… it is very strong in children but, slowly slowly, becomes weaker. The voices of the parents and the teachers, the society and the priest, become louder and louder. Now if you want to find out what is your voice, you will have to pass through a crowd of noises.

You are carrying a still, small voice of your own, unheard, and in the crowd of voices that have been imposed upon you, it is almost impossible to find it. First you will have to get rid of all those noises, attain a certain quality of silence, peace, serenity. Only then will it come, as a surprise, that you also have your own voice. It was always there like an undercurrent.

Unless you have found your natural inclination your life is going to be a long, long tragedy, from the cradle to the grave. The only people who have been blissful in the world are the people who have lived according to their own intuition and have rebelled against any effort by others to impose their ideas. Howsoever valuable those ideas may be, they are useless because they are not yours. The only significant idea is that which arises in you, grows in you, blossoms in you.

Jivan Mary, everybody is born a rebel because everybody is born to be an individual in his own right. Everybody is born not to be a part in a drama but to live an authentic life, not to be a mask but to be his original face. But no society till now has allowed people to be themselves. Once in a while a person has escaped — a Gautam Buddha, a Zarathustra, a Chuang Tzu, a Kabir. These people suffered all the condemnation of the society, but they found the joy of being themselves. All the condemnation of the society was nothing in comparison to the joy that they found. They suffered laughingly….

When al-Hillaj Mansoor was killed by the orthodox, the traditionalists, because he was saying things which were rebellious, almost a million people gathered to see this ugliest possible murder. The crucifixion of Jesus seems far more cultured, because al-Hillaj Mansoor was cut into pieces: his legs were cut off, his hands were cut off, his eyes were taken out — piece by piece. This was a torture perhaps no other man has ever gone through, but there was a smile on his face. Under all this inhumanity, barbarousness…

And what Mansoor said is something to be remembered. He said, “I am smiling because you are killing somebody else; you are not killing me — that is beyond your capacity. I know my self, which no fire can burn and no sword can kill. You can cut the body… I am just smiling at the foolishness of you, and the emperor who has ordered this stupid act.”

Everybody is born a rebel, that’s why it is so easy to transform anybody who is still alive. Just a little understanding, a little encouragement, and he can be helped to drop his whole past and be reborn. Everybody can become a rebel.

A female gorilla was turning down all her male suitors. The zoo desperately needed some baby gorillas and the zookeeper was at a loss as to what to do about it. While driving home that evening, the keeper notices a hairy Italian man walking about without a shirt on, and pulls his car up alongside him.

“Hey,” he calls, “I will pay you five hundred dollars if you will come to the zoo tomorrow morning and make love to our female gorilla.”
“Vai a fanculo buddy,” says the offended Italian, “you have some nerve!” And he storms off.

At home that night he relates the incident to his wife, who throws up her hands and cries, “Mamma mia! We are so poor, we need-a the money. So tomorrow you-a go and make love-a to this gorilla, or don’t-a come home to-a mamma.”

The next morning, at the zoo, the Italian is about to climb into the gorilla’s cage when he turns to the zookeeper and says, “Look, I will make-a love to this-a gorilla on three conditions: First-a, I don’t-a have to kiss it. Second-a, I do it once. And third-a, when the kids are born you raise them as-a Catholics.”