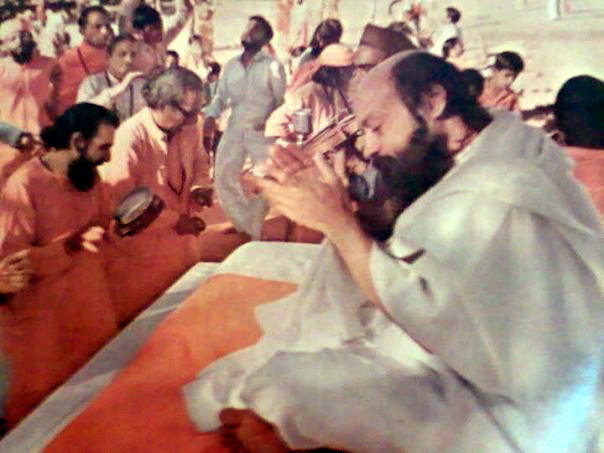 Buddha emphasized death too much — that’s a way. If you emphasize death too much, it helps: people become more and more aware of life in contrast to death. And when you emphasize death again and again and again, you help people to awaken. They have to be awake because death is coming. Whenever a new sannyasin would be initiated by Buddha, he would tell him, “Go to the cemetery — and just be there and go on watching funeral pyres, dead bodies being carried, burned…go on watching. And go on remembering this is going to happen to you too. Three months’ meditation on death, then come back.” That was the beginning of sannyas.

There are only two possible ways. One is, emphasize death; the other is, emphasize life. Because these are the only two things in existence — life and death. Buddha chose death as a symbol; hence the yellow robe.

The orange represents life; it is the color of blood. It represents the morning sun, the early dawn, the eastern sky becoming red. My emphasis is on life. But the purpose is the same. I want you to be so passionately in love with life that your very passion for life makes you aware, your very intensity to live it makes you awake.

Life need not be thought, it can be lived. It can help you to be mindless more than death can. Hence my choice is far better than Buddha’s choice, because life is right now; you need not go to a cemetery. All that you need is to be alert and life is everywhere…in the flowers, in the birds, in the people around you, the children laughing…and in you!…and right now! You need not think about it, you need not infer it. You can just close your eyes and feel it — you can feel the tickle of it, you can feel the beat of it.

But both methods can be used: death can be used for you to become a meditator, or life can be used — my choice is life. And I emphasize and repeat that my choice is far better than Buddha’s. Buddha’s choice of death as a symbol helped this whole country to become dead, dull, insipid. My choice of life as the symbol can revive this country — not only this country but the whole world — because it is not only the Buddha who has chosen death as a symbol, Christianity has also chosen death as a symbol — the cross. So the two greatest religions of the world, Christianity and Buddhism, are death-oriented. And because of these two religions…. And their impact has been the greatest: Christianity has transformed the whole West, and Buddhism has transformed the whole East.

Jesus and Buddha have been the two greatest teachers, but the choice of death as a symbol has been dangerous, has been a calamity. I choose life. I would like this whole earth to be full of life, more and more life, pulsating life. But what Buddha says about his yellow robe I would also say about my orange robe.