Osho on Being Total – How to be total? How to give Everything? 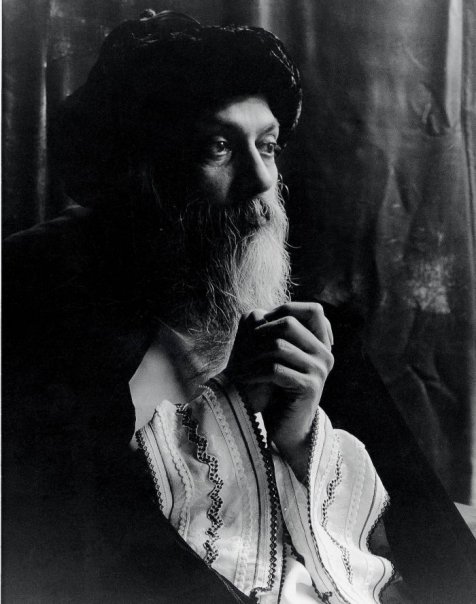 Question – How to be total? How to give Everything?

That’s why Buddha says: Become a nothingness. Just look deep into yourself and Let the cloud of the ego disperse. Let there be empty sky… in that empty sky there is no division. Clouds divide. When there are no clouds, the sky is undivided, one. Thoughts divide.

When there are no thoughts in you, there is totality. And remember, even the thought of totality will be a divisive factor. Now you ask: HOW TO BE TOTAL. This is an idea. Listening to me, again and again seeing the grandeur of totality, a greed arises in you:

HOW TO BE total? But you have missed the whole point. How can you ask such a question?
Totality is not something that you have to be. If you do something, you will remain partial. Doing can never be total, only non-doing can be total. When you are a non-doer, when there is nobody doing anything, there is totality.

Totality is absence of all doings, all thinkings, all that divides. Totality is silence, utter stillness. Don’t ask: How to be total?Just ask: How to see why I am not total? Remember, that’s why Buddha’s path is known as VIA negativa, via the negation. It does not talk
about positive things, it simply talks about the negative.

Mind stops for a moment. The frenzy of love, the madness of two energies meeting, merging – the mind is surpassed, transcended. The mind is pushed aside; the mind is no more needed in that space. All thoughts disappear, time StopS, and suddenly you are total.

That’s why people are so much in love with love – in spite of all the saints. They don’t bother about the saints. People go on loving – they pay lip-service to the saints but they go on living and loving; they don’t follow them. They know that they have only one moment of ecstasy, and that is love.

If you have gone to Khajuraho you must have seen the ecstatic expression on the faces of MAITHUNA figures – lovers in deep ecstasy. Even the stone has become ecstatic. Those stone statues, that sculpture, has great poetry, has great softness. Those creators must have been of immense experience; to turn stone into loving ecstasy is great art.

I have seen many things, but nothing compared to Khajuraho. Khajuraho remains the greatest wonder on the earth: transforming stone into ecstasy. The faces show something of the transcendental; time HAS stopped. There are no thoughts in the heads; all division has disappeared. These moments are holy moments, because they come from the whole.

You ask me: HOW TO BE TOTAL?
Just look in some moments when you ARE total, just to see the taste of totality. Listening to music sometimes it happens. Or watching a sunset. Or listening to me. If you are deep in love with me, it happens; it happens again and again every day. I can see on your faces the same expression as is there on Khajuraho statues.

You disappear; something stops deep down in you. There is no movement, everything is utterly quiet – and you are total. I give you th e taste of totality every day. And Vidya, you ask me: HOW TO BE TOTAL? Just allow these moments more and more; don’t miss a single opportunity. Looking at the trees, look so deeply that you disappear in the look.

Listening to the birds, forget yourself completely. And so on and so forth…. Every moment there is a possibility to be total. Whatsoever you are doing, be absorbed in it so utterly that the mind thinks nothing, is just there, is just a presence. And more and more totality will be coming. And the taste of totality will make you more and more capable of being total.

I have heard about a man whose wife died. And he was sitting late, very late, in the pub. And somebody asked, ”Why do you go on sitting late still? Because you used to tell me that it is because of the wife that you sit in the pub so long. But now the wife is dead!”

The man suddenly stood up. He said, ”Thank you! I had completely forgotten – just old habit!” Just a few months before, it happened: the defence minister of India, Jagjivan Ram, spoke somewhere in the south. For one hour he criticized the Congress party and Indira Gandhi. He himself has been in the Congress his whole life; he was a defence minister in Indira’s government too.

Then he changed the party, became part of Janata party. For one hour he spoke against the Congress party, and in the end he asked the audience: ”Please vote Congress.”
Just old habit – must have been doing this for fifty years: ”Vote Congress!”

Habits die hard. To be untotal is just a habit. And sometimes, in spite of you, totality happens. So just watch those moments – when it happens, how it happens. Learn some secrets from those moments and move in those moments more and more. And see when it is not happening – get out of those moments, slip out. It is not a science, it is ; knack. It is a very very subtle art.

And you ask: HOW TO GIVE EVERYTHING?
The very idea of giving is meaningless. When you have something to give, it gives itself, it shares itself. When you are happy, happiness spreads. When you are blissful, it overflows. One never asks ”How to give?” One simply GIVES! One cannot do otherwise. That state finds its own way of expression and sharing.

When you have a song it sings itself – not that you have to ask ”How to sing it?” It bursts forth in jubilation, in a great shout of joy. The shout may he wordless, may be meaningless, but that is not the point. What is the meaning of ’hallelujah’? There is no meaning in it. It is not a word at all, it is just a shout of joy. You are saying that you have something which cannot be said. You are saying something which has never been said and cannot be said.

But when it is there it happens. When the clouds come and they are full of rain they don’t ask, ”How can I give everything?” They simply start giving – they start showering. When the flower opens it does not ask, ”How can I share my fragrance?” In fact, what can the flower do? There is no question of doing. The fragrance is already on the way, on the wing. It has started moving!

When you have, sharing happens. When you don’t have, only then do these questions arise: ”How to give? How to share?”

You cannot resist it, it has to be given forth. There is no way to avoid, it is inevitable.
So first thing, you ask: HOW TO BE TOTAL?
Not to be is to be total.

Second, you ask: HOW TO GIVE EVERYTHING?
Know that you have nothing. And wait… and wait in silence, in patience. Something will start flowing out of your being. It will take you unawares. It will be a great surprise – that you have started sharing! And the most difficult thing in the world is to see that you don’t have anything – the most difficult, because it feels so bad that you are empty, that you are a beggar. People go on pretending that they have….

Osho – You cling to life because your life is unfulfilled