Osho – Man is afraid of losing his body and his possessions 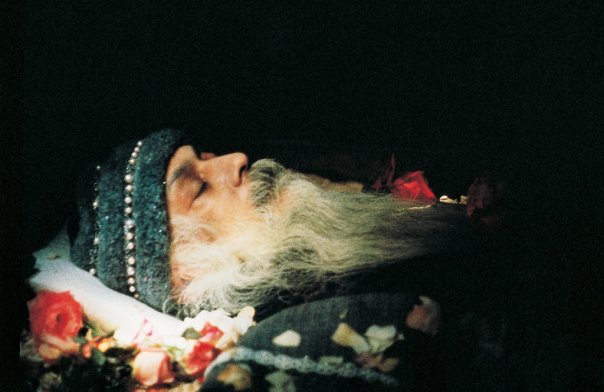 Question – Beloved Osho, Why is man afraid to leave his body and his possessions?

Osho -Because you don’t have anything else — just your body, your possessions. And what are your possessions? Extensions of your body. For example, no animal has created weapons, for the simple reason that animals are capable, strong; their teeth, their nails, are enough to destroy a man. Man is the most helpless, the weakest animal on the earth.

Even if an Alsatian dog follows you, you have to start running, shouting for the police! You cannot fight even with a dog. What to say of a dog, even a cat is enough! That’s the reason man invented weapons — extensions of the body which are not given to him naturally. He developed bows and arrows because he is afraid even with weapons to come close to a lion.

In fact you may have a gun, but if you suddenly come across a beautiful, strong lion, you will be frozen; your fingers will not function to trigger your gun. Most probably your gun will slip from your hand when you see the lion standing in front of you! Man is so weak — but his weakness has proved a blessing in disguise. He had to invent bows and arrows so he could kill from a distance. He had to invent guns, machine guns, and even then….

I know many famous hunters in India. The king of Bhavanagar in his palace has hundreds of lions’ heads hanging all around the walls. I have been with him when he went hunting. He said, “But why are you interested? You are not for violence, you are against hunting.”

I said, “I simply want to see how, with your powerful automatic rifle, you face a lion who has no weapons.” And it was significant that I went because there I saw that even with guns man is so powerless.

First a stage was made up high in the trees — and you have the gun! A stage is made for the king and for the friends who had come with him, far away. The lion cannot climb up the tree that far. Then all the branches of the tree below the platform were cut, so even if some crazy lion tries, he has no support anywhere. Then a cow was tied underneath the tree.

I was seeing the whole scene; silently I watched the whole scene. Of course when the lion smells that a cow is nearby, he comes; that cow is an invitation card. And the poor lion cannot see that far above in the darkness there is platform, and his death.

He said, “You don’t know hunting. Even sitting on this platform I am shivering with fear, although I have killed hundreds of lions. Just to see the lion is enough to freeze you!”

And lions are very agile people. If you hit the lion — and you can miss, then you lose the game — the lion will jump into a bush, into a trench. He has to start eating the cow, because that is the habit of lions: while they are eating they don’t want to be disturbed. And they become so absorbed in eating that it is easier for you to kill them.

I asked the king on the way, “If this is how you have collected those hundreds of heads of lions, please remove them — they are all proofs of your cowardliness. Have you ever thought,” I asked him, “that you call hunting a game, when the other party has no weapons and is not even aware of you, that you are hiding above in the trees? You call it a game? Is it fair?

“You should be on the ground; you should be without a gun, because the lions cannot use guns. Then even a single head would have been enough to prove that you are a brave man. These hundreds of heads, they don’t prove anything except cowardice. If this is the way you have collected them — that’s why I wanted to come with you to see….”

And if man kills in such situations, where he has the upper hand — no fear, no danger — it is a game; and if a lion kills a man, THAT’S a tragedy. Strange! The lion was also playing a game, and he was playing fairly without any weapons, naked, open.

Man is afraid of losing his body and his possessions. Possessions are extensions of your body. Your house, your bank balance, your furniture, your paintings — everything that you have collected is somehow connected with your body. And you know only that you are a body, so when death faces you, you are afraid of losing your body and your possessions — naturally, because you don’t know anything which is beyond death.