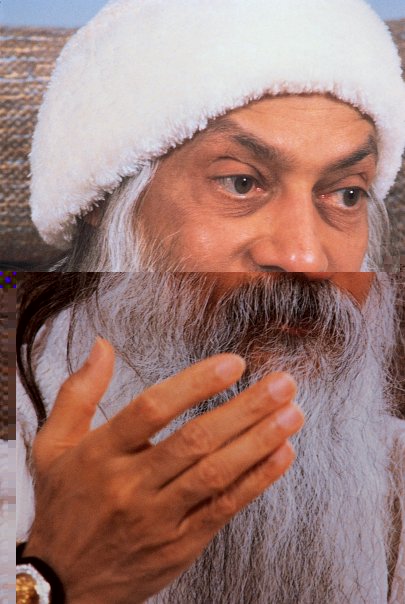 Osho – Everything that we go on doing on the surface will be just like changing a name. Inside you will remain the same. Your persona can never become more than skin deep — your know ledge, your identity in the world is nothing but a persona, a dressing.

Zen says you are wasting your life. Go deep, go beyond your knowledge, go beyond your name and your form, go beyond that identity that the society has given to you. Zen Masters give koans to their disciples to look into their original face — the face that you had before you were born. Now you have a false face; it has been given to you by the society, it is just a formality. And if you think it is you, you are in a very bad shape.

Remember, this is very cheap. Drop Christianity, drop Islam, drop Buddhism, drop that which has been given to you by the society, by birth, by association, by culture, by country. Drop all that so that you can find out who you really are. These things will be taken away by death; death will burn your persona. And then you will come face to face with your being and you will not even be able to recognise it, because you never knew that this was your face. We live very superficial lives.

I have heard. A beggar clutched at the sleeve of a benevolent-looking passerby.
‘Five cents, sir, for a cup of coffee,’ he whined.
The other turned and surveyed him.
‘Why,’ he asked, ‘should I give you money? What brought you to this sad plight?’
‘A terrible catastrophe, sir, ‘ the beggar replied. ‘Two years ago I was a prosperous business man like you, I worked industriously. On my desk was the motto ‘Think Constructively, Act Decisively’. Money poured in and then, and then’…the beggar’s frame shook convulsively…’the cleaning woman burnt my motto!’

Just the burning of the motto!’The cleaning woman burnt my motto!’ — that has made him a beggar. Have you anything more than just a motto? What do you call your name? What do you call your identity? It can be burnt; death will take it away. Death is nothing but a cleaning woman. It will clean it away and you will cry convulsively. Then you will say, ‘Death has killed ME.’

But if you think your clothes are you, your body is you, your mind is you, then you have given power to the hands of death. Death will destroy this and then you will convulsively weep that ‘I have been killed’ and for your whole life you will be afraid of death. Zen says that if you drop knowledge — and within knowledge everything is included, your name, your identity, everything, because this has been given to you by others — if you drop all that has been given by others, you will have a totally different quality to your being — innocence. This will be a crucifixion of the persona, the personality, and there will be a resurrection of your innocence; you will become a child again, reborn.

Hindus call this state DWIJ, twice born. This is a second birth. A man becomes really a Brahmin when he has gone through the cross — the personality burnt and destroyed by death. Or he has renounced it himself voluntarily, then innocence arises and he is reborn. Then he is a Brahmin because then only does he come to know what truth is. But we have decided to follow the short-cut, the way of the belief. We are hoping against hope that somebody else’s eyes will do the work for us.

Osho on Zen and Politics – Is Zen against Politics?