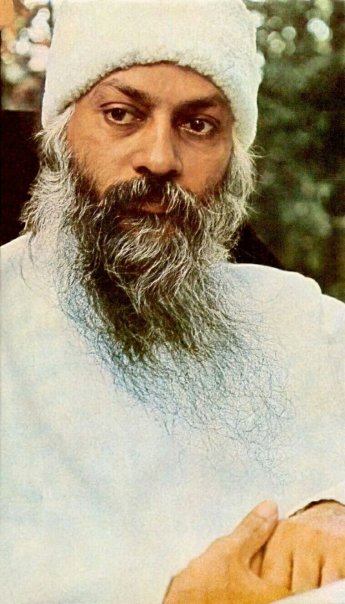 Osho – The greatest courage in life is needed when you go inwards, for many reasons… The first is: it is a flight from the alone to the alone, it is going deeper into your aloneness. And man is caught up in such a way that he becomes accustomed to company, to people, to family. He forgets absolutely the joy of being alone; hence there is a fear of being left alone.

That’s why nations exist: it is because of fear, not because of any love. That’s why religions exist — not because of a longing for god. How many people really long for god? Not so many Christians, not so many Hindus, not so many Mohammedans. The whole world is religious in that way. But people are afraid of being left alone; they have to be part of some crowd — a political crowd, a social crowd, a religious crowd; any crowd will do, but they are dependent on the crowd. They feel good when they are surrounded by people; they start feeling shaky, scared when they find there is nobody and they are alone. That is the fear that grips you when you are lost in a jungle or in a desert where, as far as you can see, there is nobody. That utter aloneness creates great fear because we are conditioned by the crowd, for the crowd, as part of the crowd. We are not brought up as individuals. We are brought up as small units of a great mechanism called the society, the nation, the church.

People are not satisfied with these crowds — they create their small crowds — because when the crowd is very big you start losing yourself in the crowd. It becomes impossible for you to recognise people, to see who is who; hence people create small crowds of their own: the Rotary Club, the Lion’s Club. These are just small crowds where everybody knows everybody else, where everybody is acquainted with everybody else. The greatest fear arises when you move inwards… because it is possible to find a man in the desert, it is possible to find somebody in the jungle when you are lost.

I have heard a story: Once a hunter got lost in the jungle. He tried for three days continuously, but he could not find any way to get out. He got deeper and deeper in the thicker parts of the jungle. He became desperate: he could not sleep, there was nothing to eat. After three days he thought ‘This is death. Now I cannot survive.’ He shouted and did everything and on the third day evening, he suddenly saw a man coming. They both rejoiced, both ran towards each other and hugged each other. They were absolutely unacquainted, but what a joy to see another man! But soon they found that that joy was wrong, they were disillusioned: both were lost. Each was thinking ‘Now I have found a person who will help me to get out,’ and both rejoiced for a moment, but the moment they explained to each other why they were rejoicing so much, both were shocked.

That’s how marriage came into existence. Two lost people for a moment enjoy the honeymoon, thinking ‘I have found the person whom I was seeking,’ and each is thinking the same; soon they will be disillusioned. But still, even though they will be miserable, they will be miserable together. It is better, people think, to be miserable together than to be miserable alone; in fact in togetherness misery is multiplied. But people love togetherness because we are brought up in that way. From the very first moment of birth the child depends on the mother, on the father, on the family. Then his circle becomes bigger, but he always remains part of some group, some collectivity.

Secondly: when you move inwards you move without any maps. Even if you go to the moon you have a certain map, a certain route. There have been people before you, their footprints are there, there are milestones everywhere. Even in the sea you are not totally lost, in the sky you are not totally lost: you can communicate with people, you can give messages — even from the moon! You can remain in some kind of relationship; it may be just through radio waves, but you can remain connected. You can still hear the voices of people, you can still see that others are there; you are connected.

But when you move inwards, the people who have gone in cannot leave any footprints for anybody. It is impossible, because everybody’s inner territory is so different that Buddha’s footprints won’t help you and if you follow Buddha’s footprints literally, you will never find yourself.

Jesus’ map won’t help you; you cannot follow it literally. It can help in a very indirect way; it can make you aware of certain things inside, but in a very vague sense. It can give you the confidence that ‘Yes, there is a world inside, no doubt about it, because so many people cannot be lying. Buddha, Jesus, Zarathustra, Lao Tzu, Mahavira, Krishna, Mohammed, such beautiful people cannot all be lying. They cannot be in a conspiracy — for what? They never existed together — they lived in different ages, in different countries — yet they all speak almost the same language… But you cannot follow it exactly because Buddha’s inner territory is different. Each individual is unique, so unique that you have to discover yourself all alone; hence great courage is needed. This is the greatest adventure in life, and one who goes on this adventure is blessed.

3 thoughts on “Osho – Each individual is unique, so unique that you have to discover yourself all alone”