Osho – Enlightenment is the very source, the very ground, of your being 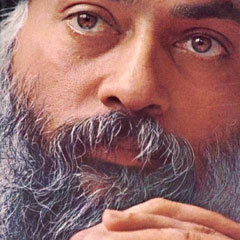 Enlightenment is not an experience, that’s why nothing can be said about it. Enlightenment is not one of the series of experiences that you have lived through. Enlightenment is not something that happens to you like a content in the mind. When the mind is not there you don’t say ‘This is enlightenment’, you don’t feel it as an experience; rather, on the contrary, you see it as your nature. It has always been so — just because of that internal talk you were too occupied and you could not see it. It is not a realization, it is only a recognition, a remembrance. It has always been so from the very beginning — just you had got lost into thoughts, fantasies. Now the fantasy is no more there, you are back home. It is your home.

Enlightenment is not an experience; it is your interiority, it is you. One does not become enlightened; one comes to know that one is enlightenment, one is light, one is consciousness.

But, Parivesh, your question is philosophical. WHEN THE INTERNAL TALKING STOPS, you ask, IS THIS ENLIGHTENMENT?

Don’t be philosophical about these things — these are not philosophical things. You cannot think about them; you can only be, and know; be still, and know. If I say ‘Yes, this is enlightenment’ I will only be giving you an idea. That will burden your mind more, that will become part of your internal talk. Then you will not talk much about money, and women, and you may start talking about enlightenment, God, Buddhahood. But it is the same. The object of thinking does not matter much — you can give any object, and the thinking can weave and spin around it. The question is that the thinking should disappear, evaporate.

Martin Heidegger has called this resting into yourself ‘the releasement’. He has also called it ‘the enchanted regioning’. There is a region inside you, the enchanted region, a space where you are still God, where you have not fallen at all — where you cannot fall in the very nature of things; where you still live in the Garden of Eden, where the fall has not happened — cannot happen.

One cannot fall from God and God’s paradise; one can only fall asleep. This is my interpretation of the biblical story. Adam has not been driven out of the Garden of Eden, he has fallen asleep. By eating the fruit of the Tree of Knowledge he has fallen in dreams, he has started thinking. That is the meaning of the whole parable. That is the meaning of the symbol of the Tree of Knowledge: he has started thinking. Thinking, he has gone away — in thinking only; otherwise, he lives in the same place. But he is no more available to God; he has moved into fictions, imaginations.

Wake up, and you have always been enlightened. Just wake up. Open your eyes. Don’t let enlightenment become an idea in you, otherwise you will think about it, and that will be a distraction.