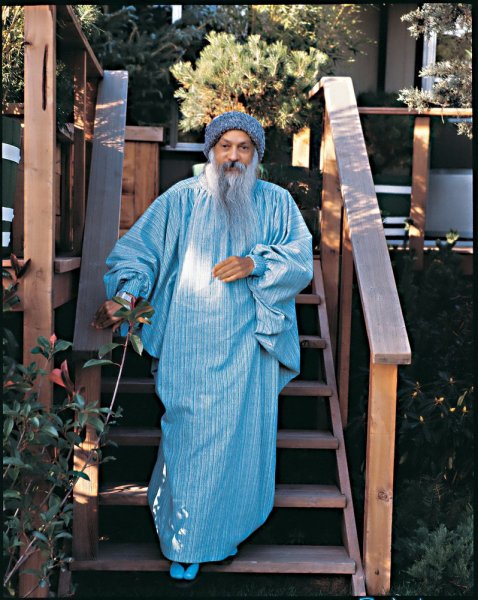 If each moment brings you something from the unknown, if each moment is a penetration of the unknown into the known, then life is an excitement — without expectation. Then life is a constant movement into the unknown. Nothing can frustrate you because in the first place you never expected that anything was going to be the same for ever.

Why is there so much frustration in the world? — because everybody is expecting permanence. And permanence is not the nature of things. Nothing can be done about it. You have to grow and drop the idea of permanence. You have to grow and become a flow. Don’t be like solid rocks; be like fragile flowers. Your brahma is just a solid rock. The absolute of Hegel and Shankara is a solid rock. But the nirvana of Buddha, the understanding of Heraclitus, is like a fragile flower, changing. Enjoy it while it lasts, and don’t ask for more.

You are in love — celebrate while it is there! Don’t start making arrangements so that it is always there; otherwise you will miss the moment in making arrangements. And by the time arrangements are ready, the flower is dead. By the time you are ready to enjoy, the moment has already gone. And nobody can bring it back, there is no going back. The river is onward and onward flowing, and you are being thrown to new shores every moment.

Just think: Hindus, Jainas, have a conception of a MOKSHA, of a state of consciousness where nothing changes. Just think for a moment — nothing changes, and people who have become enlightened, according to Jainas and Hindus, they will remain in that absolutely permanent moksha, nothing changing, not at all — that will be absolute boredom. You cannot improve on it. That will be absolute. You cannot think of a more boring situation: God sitting there and you sitting there and nothing changing, nothing to say even. Even one moment will look like eternity — so boring. No, for Heraclitus and Buddha and Lao Tzu, the soul of existence is change. And change beautifies everything.

A young woman — you would like her to remain always young and the same. But if it really happens you will be bored. If it really happens that a young woman, by some biological device, some trick of science… and it is possible! Sooner or later, man is so foolish, it is possible that you may find some biological trick, inject some hormones in the body, and a person remains at the same age. A girl of twenty remains twenty and twenty and twenty — can you love this girl? It will be a plastic girl. It will remain the same but there will be no changing seasons, no summer, no winter, no spring, no fall. The woman will be dead! You cannot love such a woman; it will be a nightmare. You will want to escape to the other corner of the world to escape from this woman.

An old person becomes beautiful if he has lived life. If he has not lived, then he wants to cling to some past moment which is there no more. And this is the ugly man: when youth has passed and you are trying to show that you are young; when sex has passed — should have passed if you have lived — and you are still seeking things which are good in their season, which are beautiful in certain moments of life. But an old man is ridiculous falling in love… ridiculous! He is as ridiculous as a young man NOT falling in love — out of season, out of step with life.

That’s why they say “dirty old man.” The saying is good. Whenever an old man thinks about sex, it IS dirty; it shows that he has not grown. Sex was good at its own stage, but an old man now should be getting ready to leave, now should be ready to die, now should make arrangements — because soon his ship will be ready and he will be leaving for the unknown shore. He should make arrangements for it now, and he is behaving like a young man or a child. Nothing is more ugly than that: pretending something which has passed, living in the past. He is mad!

Everything is beautiful at its moment, and everything has a moment for it. Never be out of step. That’s what I call being religious — never to be out of step. Be true to the moment: when young, be young; when old, be old. And don’t get mixed, otherwise you will be a mess, and a mess is ugly. There is no need to do anything on your part really; you simply have to follow nature. Whatsoever you do goes wrong. Doing itself is wrong… simply flowing.