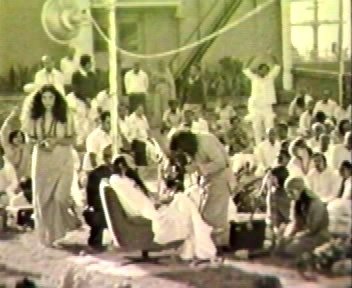 Question : I realized in yesterday’s discourse that i am resisting the word `god’. My thoughts go back to an event which happened several years ago when i was caring for a very ill man in the hospital — he was dying. He had asked me to get a priest for him as he was afraid. On arrival of the priest, the ill man said, “god damn you,” directly to the priest. And the priest walked away, and said to me, “he isn’t worth it.” i told the priest, “this man is very ill and the words he uses, he know not.” the priest still refused to help him. Since that day i have not gone into a church. I know god is within me. What is the resistance then? Please help me.

Osho : The word `God’ is not God. The word `love’ is not love. The word `fire’ is not fire. So the first thing is to remember: don’t get attached too much to words, don’t get obsessed too much with words. Words are only symbols, indicative: use them, but don’t become burdened too much by them. If the word `god’ creates trouble, forget that word. `Allah’ will do, `Ram’ will do, `X Y Z’ — choose another word if that word has become wrongly associated. But if you start creating a resistance against God himself, against the truth itself only you will be responsible, and only you will be missing something of tremendous value. but this happens. We use language; we become so much obsessed with language that we forget that language is not the reality. In fact, one has to put language aside to see the reality.

The incident is significant. if you had become resistant against priests, there was nothing wrong in it; but that has not happened. The priest had refused to help — not God. Avoid priests, there is no problem in it — in fact, the more you avoid them, the closer you will be to God. The priest is not needed at all. He goes on propagating that he is needed; he emphasizes that without him there is no possibility for you to ever enter into the world of God — but that is HIS proposition. It is his business, it is his trade secret, he has to create this atmosphere. Otherwise, no medium is needed; God is immediately available.

But of course, priests have made a great business — the greatest ever — and they ideal in such a commodity which is invisible, so you can never prove whether they deliver or not. The commodity itself is invisible. It is a beautiful game.

I have heard… “What’s the little boy crying about?” the kind old lady asked the ragged urchin.
“That other kid swiped his candy,” he replied.
“But how is it that you have the candy now?”
“Sure, I got the candy now,” replied the urchin. “I’m the kids lawyer.”

You get it? The priest is going to exploit you; he becomes your lawyer, he becomes you agent. He himself is completely unaware of God — otherwise he would not be a priest; he would have been a prophet, not a priest at all. `Priest’ is an ugly word: one who is using religion as a business and exploiting people in the name of God. The prophet is one who helps you to be transformed, transfigured. The prophet is not so much concerned with God as he is concerned with you, your reality. Once your reality starts manifesting you will know what God is — because you are God in seed. We can completely forget about God: Buddha never talked about it, Mahavira never talked about it. Yet Buddha helped tremendously. He insisted: God is not the question, God is not the quest; the quest is your innermost being. A prophet is concerned with your being. If your being flowers, blooms, in the fragrance you will know what god is. There is no other way.

By prayer, by the temple, by the church, by the ritual, tradition, you are not going to get anywhere; only the priest will go on becoming richer and richer. And his investment becomes so big that the priest and the politician join together in exploiting people. That is the greatest conspiracy: down the centuries, the priests and the politicians have always joined hands together. They are the greatest culprits. Jesus was crucified because he was not a priest. He started behaving like a prophet, priests are afraid — because he is going to destroy the whole business. Jesus was crucified because of the priests; the priests were behind the whole scene. No prophet is ever tolerated by priest — cannot be tolerated; it is dangerous.

So if you incident had helped you to become aware of priest, it was good. But somehow your association went wrong. Don’t go to a church, there is no need; God is everywhere. Don’t go to a priest, there is no need; God is available to you — directly, immediately. But if you have a resistance to the word `god’ itself, that will become a barrier. That will prohibit you; that won’t allow you to flow towards the infinite. and there is no reason — because God has not done anything. The priest turned away, but do you know that God turned away? God has never turned away from anybody. In fact, because the priest turned away, God may have looked and cared for the dying man more — because there was no other help. When a man is helpless, God simply starts flowing towards him. In tremendous helplessness you become receptive. When the man was completely helpless, and the priest turned away, and the man dying and death is enclosing upon him — in that helplessness he must have made a contact; you cannot see it from the outside.

Be against the priest. But there is no need, it is not warranted at all, that you say, I know God is within me. You don’t know, you know it not at all. You have heard it. You have heard me say it, you have heard Jesus saying it — “God is within you” — but you don’t know it at all. Because once you know it, then there is no problem; knowing that `God is within me’, immediately God is without too. The moment you know a single ray of the divine penetrating you, you have come to know all that is there to be known, it becomes known, the without is known. The without known, it become known in the within too — because within and without are not two separate things, they are two aspects of the same energy.

Now, this thinking that `God is within me’ may again be a trick of your resistance, because you don’t want to see God out there. You are against it, because somewhere deep down in your mind you feel that if God is there then you will need a mediator, then you will need somebody to guide you there. If God is without, somewhere up in heaven, then somebody will be needed to guide you. Alone, you will not be able to find him, where he is. So you say, “God is within me” — now there is no need for the priest. You are saying it just to avoid the priest — but you don’t know it.

God is all. The distinction between within and without is false. Without and within are on; it is one reality, from one corner to another. It is not two, it is not dual, so don’t divide it.

I have heard… When Xerxes stood on the shore with his army and looked across the Hellespont, he asked himself, “How can I get my men across?” He commanded his generals to build him a bridge of boats, and they obeyed. But a storm came up and smashed his bridge into driftwood. In a towering rage, he ordered the execution of the overseers who had directed the work. But that was not enough to satisfy him as he was really in a great rage, almost mad. So he ordered his slaves to administer three hundred lashes to the sea.

Don’t be in such a hurry to make conclusions. A wise man never concludes so easily, because all conclusions make your mind closed. We don’t know enough; conclusions are dangerous. A conclusion is right only when you have known all. The greatest wise men of the world have said they know nothing, so how can we conclude? And whatsoever we know is so small, so tiny… as if you have read one line in the Bible, and the whole Bible has not been read by you, and from that one line you conclude something. It will be foolish; it is not wise.

Don’t pay much attention to excuses — they are meaningless. Behind the excuses the real problem hides. The real problem is: to become religious, one has to deny oneself — that is the only sacrifice needed. The ego has to be dropped. The mind has to cease for the God to be — and of course, then there is resistance.

So drop this incident. This has nothing to do…. In fact, it is very rarely that I come across a person who is not resistant, who is not deep down fighting with God. It is natural; try to understand it. We want to remain our own selves: God is the greatest danger. Hence, people go to the priest. They could have walked directly to God, but they go to the priest — because they don’t really want to go to God. The priest protects them from God. They go to the scripture, because the scripture is dead and you cannot find an alive God in scripture. This is a way to avoid.

To be really religious is to commit suicide. And I mean it — when I say suicide, I meant it — suicide. When a person kills himself, that is not suicide; just the body changes — he will be born again. That is just a change of the body, change of the clothes, change of the abode. But when a man simply drops his ego, he has committed real suicide, authentic suicide; now he will be coming no more. Now there will be no need for him to have another abode in this world of misery, in this world of darkness, in this world which is almost a hell. He will not be coming again. Ego dropped, you journey is finished; you have learned the lesson. That’s the resistance.