Osho – Faith is like eyes: you see yourself. Belief is like a lantern in a blind man’s hand 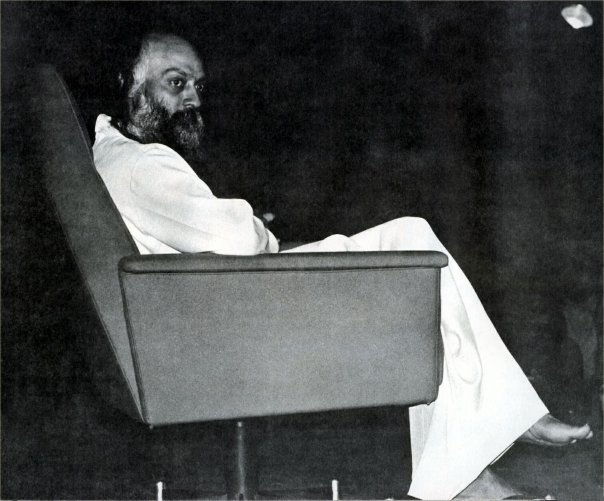 Question – The other day you said that belief was like a lantern in the hands of the blind. May i know what faith is?

Osho – Faith is like eyes: you see yourself. Belief is like a lantern in a blind man’s hand: he cannot see, he cannot even use the lighted lantern. Even that lighted lantern will be just a burden to him, to be carried. And if the light goes off he will never become aware of it. Belief is just believing what others say. It is not faith; faith is knowing. Faith is existential, belief is intellectual.

If I talk about love and Iistening to me you don’t cling to my words but you move into love, you take the risk of love, you move into the danger of love, then you will come to an understanding which will be like eyes. If you just listen to me, it is very cheap. Just listening to me you can collect information and you can say, “Yes, I know much about love.” Your knowing will be a deception.

I have heard…. Mulla Nasrudin and his wife went to Israel for their holidays and visited a nightclub in Tel Aviv. A comedian was on the bill who did his whole act in Hebrew. Nasrudin’s wife sat through the comic’s act in silence, but Nasrudin roared with laughter at the end of each joke.
“I did not know you understood Hebrew,” she said to the Mulla when the comedian had concluded his act.
“I don’t,” replied Nasrudin.
“Well, how come you laughed so much at his jokes?”
“Oh,” said Nasrudin, “I trusted him.”

Buddha must be saying something beautiful — so many people believe in him, so you believe. But you have not understood the joke; the laughter is not yours. It will tire you, it will not refresh you. When laughter happens to you it spreads from your very being, from your innermost core of being to the surface. Your whole body ripples with it, pulsates, throbs. It gives you a sort of bath; you are new after it.

Belief is dangerous. Even to be a sceptic, to be an agnostic, is better. To be true when you don’t know is better because this honesty of accepting that you don’t know will help. This honesty will grow. One day or other you will start seeking, because nobody can remain in deep ignorance for long. Everybody wants to KNOW. To know is such an intrinsic desire in man that you cannot avoid it if you are true.

Please drop your beliefs so your mind is not clouded with rotten furniture, and you can see what you know and what you don’t know. To know exactly what one knows and what one does not know is the basic step towards knowledge. To be absolutely clear-cut that this is all that you know and this is all that you don’t know. You cannot remain in this state. You will start moving towards the unknown, because it is human to seek to know.

Every child is born with infinite curiosity; that’s why children bore you to death with their questions. They go on asking and asking. They don’t bother whether you are interested in answering them or not; they go on asking. You want to keep them quiet but they go on bubbling again and again with new questions. What is happening? From where do so many questions come? a deep desire to know. But this desire is crippled by your beliefs. Beliefs give you an appearance as if you know. That ‘as if’ is very costly.

I have heard….
The nervous passenger was standing with the pilot of the river steamboat as he twisted and turned the wheel.
“Don’t you worry none,” said the pilot. “I have been running boats on this river so long, I know where every snag and sandbar is.”
Just then the boat struck a submerged snag with such force that the whole boat shivered from stem to stern. “There,” said the pilot triumphantly, “that is one of them now.”

I have heard…. Aldous Huxley had a very great library, his whole life’s efforts. He had collected many rare books. And one day it caught fire. The whole library burnt; his many valuable manuscripts were burnt, many valuable art pieces, statues, paintings. He had really been a great seeker of beautiful things; they were all burnt down to zero. He was standing in front of the fire, and nothing could be done.

When you throw your beliefs to the fire, you will feel very clean. It is just a burden. It is not yours; it cannot help. We know what is right but we do what is wrong. We know anger is bad and we go on being angry again and again. We know what should be done, but we never do it; we do just the opposite.

Whatsoever YOU know, you always behave accordingly. That’s why Socrates’ famous dictum: Knowledge is Virtue — but it is not your knowledge. He says, “Once one knows something is right, one does it. There is no other way.” When you know two plus two is four, you cannot make it five, can you? Try one day — just sit, write two plus two, and then try to write five. It will be impossible. Even if you write it you will laugh; you are joking, befooling. Once you know two plus two is four, there is no way to forget it. The basic thing is to have known it, and the knowledge should be your experience. Otherwise, you can always find rationalizations.

I have heard a small anecdote. A small town chorine had theatrical ambitions. Her parents finally agreed to allow her to try New York City, but on two conditions: first, no men were allowed in her apartment, and second, she had to call home at least once a week. “Remember,” said her mother, “I will worry about you, so please don’t forget to call.”
Armed with a letter of introduction, she went to see an agent. He agreed to help her and started squiring her about town. At the end of the week she called home. It was late and mama was perturbed.
“Honey,” she said, “you know the bargain we made about no men allowed in your apartment, and I hear a man’s voice in the background.”
“Oh,” said the future actress, “that’s my boyfriend. But don’t worry,” she hastened to assure her mother, “we are in his apartment. Let HIS mother worry.”

I have heard about a Sufi mystic, Bayazid. He meditated for years, and it is said God was very, very compassionate towards him. He had made such great effort; arduous was his search, intense was his prayer. So God sent an angel, and the angel came and said to Bayazid, “God is happy, and whatsoever you want He is ready to give to you. You just ask. Your days of seeking and inquiry are finished.”

But Bayazid said, “But no, that is not the way. I don’t want to get so cheaply because I know well…in life also I was deceived because of this cheap possibility. Now you cannot deceive me. Tell God that I will earn the hard way.”
But the angel said, “You are foolish! He is ready to burn the innermost light of your being. Just ask!”
But Bayazid said, “Thank you, and give Him also my thanks, but I am not going to do that because it will be borrowed; even if borrowed from God, it will be borrowed. Let me seek and search.”
The angel said, “God will feel offended. It has never happened; His offer has to be accepted.”

Then Bayazid looked around — he had a small lamp and the oil was almost finished. He said, “If He really wants to light something, tell Him to light my lamp because the oil is almost finished and the night is dark, and I have still to meditate. Just this will do. You just tell Him to give me one blessing: that my oil should never finish so I can meditate the whole night.”

A young boy had been taking swimming lessons. He rushed home one afternoon and breathlessly announced that he had gone off the diving board by himself.
“That’s fine, Johnny,” said his father. “But I thought you told me you went off the board last week.”
“I know,” said the boy, “but last week somebody shoved.”

Going by yourself is really totally different. When somebody shoves you, it is qualitatively different. When I give something to you, it is not the same as when you earn it. Remember it: many will be the temptations on the way. When things are available very cheaply, avoid them. Always remember that one has to go the hard way, because that is the only way. All shortcuts are false, and belief is a shortcut. Faith is a hard way.