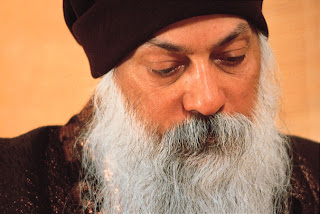 [A sannyasin who is returning to the west says she is afraid about meeting her old friend who is a marxist: He is in search of truth and I too. He has found something and I have found something. He has known me for so long and has given me so much love… ]

Osho – I know …. A few things you have to remember if you want to help anybody: the help can only be indirect; it can never be direct. If you try to convince him, you will simply create much argument; that will not help. He will become more defensive and egos are very argumentative.

When a person is involved too much in something like marxism, he simply lives through the intellect. His whole training is of the mind. From the very beginning he has a negative belief that nothing else exists; he is already prejudiced. It is very difficult to bring news to him that something that he has always believed does not exist, exists. It is easier for him to think that you have gone mad rather than to think that he has always been wrong. That is not easy.

But if you try to convince him intellectually on his own grounds, you will not be able. First he will become defensive. He will become very argumentative – and when somebody is argumen-tative, then there are many barriers and communication is lost. And the second thing: whatsoever you have attained, whatsoever you have glimpsed is something beyond the mind. It is something of the heart, something concerned with love, and you cannot propose it like a syllogism. It is not a process that can be analysed. It is an event which cannot be analysed… a simple event.

It is not a continuity. When there is a process, you can analyse it. And marxists are very efficient in analysing processes. Their whole methodology is of dialectics; to analyse a process into divisions – thesis, antithesis, synthesis – very simple. But this is something not part of any process, because the innermost being is not a process at all.

It is already perfect. It is not moving towards perfection – it has already arrived. It has never been away. It has never gone on any journey. The innermost being is absolutely perfect, and when it is, it is felt as an event, a simple event; nothing behind it, nothing ahead of it – an atomic event. You cannot divide it; it is indivisible. You cannot argue about it. You cannot manage proofs for it; you cannot collect evidence for it. You can be a witness but in a very indirect way.

So remember it, otherwise you will mess up the whole thing and you will not be able to help him. It is very possible that he may be able to harm you, rather than you being helpful to him. So be alert, because you carry something very fragile. A marxist is like a stone a rock, and you are flowering like a flower. The clash between a rock and a flower is never going to destroy the rock. The flower may be destroyed.

So it is good not to be a victim of any clash. Avoid clash. The flower can win, but the ways of the flower are very different. The way is not a direct clash. It is an indirect persuasion. What I mean is this – go there and love him more than you have ever loved him before. Don’t talk about what has happened to you. Even if he provokes you, avoid it, laugh about it. Say it is all nonsense, madness, and that he will not be interested so why waste his time.

But be loving, be meditative, move in grace. Let him feel it. That is your responsibility. Be very very alert so he can feel that something has happened to you, that you are no more the same. Bring a new breeze with you. Open some new window. Don’t argue about the window; simply open it and leave it there. He will become curious. You just have to be very alert. If you really want to help him, you have to be very watchful not to be argumentative.

In fact one should never argue about religion. And certainly never argue with a communist, because it is useless, it is pointless. And once you accept his categories, you will be defeated – not that you are wrong, but your experience is more fragile. Your experience is higher. Your experience is deeper. When you bring it to the surface, much of it is lost. It can never be brought to the surface whole and total because it is part of your inner depth. It is an organic part to your inner depth. The moment you bring it out, much is lost. And when you make it an argument, again much more is lost.

When the other tries to comprehend it through his logical structures, then it is almost murdered. This is the way to butcher a truth of experience. So laugh more; that will be helpful. That will be the argument. Smile more… dance. Invite him to dance, and dance as lovingly as you can. Go in trance and let him watch. Meditate and let him watch. Meditate in your room and leave the door open so he becomes curious and wants to see what is happening.

He is in search so there is every possibility of his coming towards me, but all depends on you. You will be my messenger so you have to be very careful.