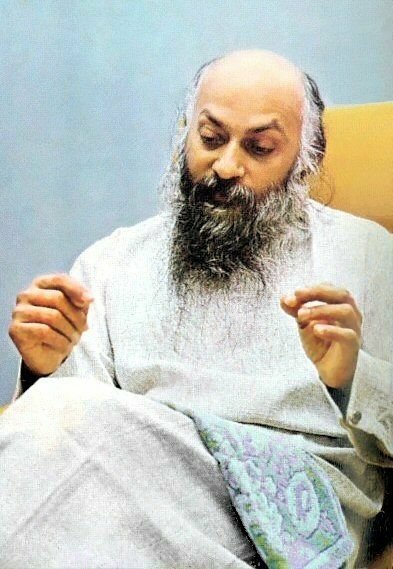 This was one of his fundamentals: that unless you know, you don’t know. You can borrow knowledge, you can become knowledgeable, well informed, a scholar, a pundit, a professor, but you will not be a seer. Deep down the ignorance will persist and will affect your life. Deep down you will remain the same childish self, immature, ungrounded, uncentered, unintegrated. You will not be an individual, you won’t have any authenticity.

Cowards are there in the churches, in the temples, in the mosques in millions, but they don’t create any religious beauty, any religious fragrance in the world. They don’t make the world more beautiful, more alive, more sensitive. They don’t create anything. They only go on doing formalities, rituals. They themselves are dead and they go on deceiving others; they themselves are deceived.

Borrowed knowledge creates great deception because you start feeling as if you know — and that “as if” is a big “as if.” Truth liberates, belief binds. Truth liberates because it has to be yours; it has to be an inner experience, an encounter with that which is. Buddha is a nonbeliever. He is not an atheist like Karl Marx or Friedrich Nietzsche; neither is he a theist like all the priests of all the religions. He is an agnostic. He neither believes nor disbelieves; he is open. That is his great gift to the world: to be open to truth.

Go utterly naked, without any conclusions, without any ideology, any prejudice. Otherwise there is every possibility that you will project your own idea. You will not see that which is, you will see only that which you want to see. You will be creating your own reality which is bound to be false. Reality has not to be invented, it has to be discovered. It is already there.

And remember, it is not the reality which is hidden, it is your eyes which are covered with layers of dust. Buddha gave to the world a nonmetaphysical religion, a psychological religion. He simply helps you to go beyond mind. He helps you to understand the mind because it is only through understanding that transcendence happens.

Hence I say, Buddha has not given a psychology. A psychology is a very ordinary phenomenon. It does not bring transformation to your life because it cannot bring any transcendence. At the most it helps you to be a little more adjusted to yourself and to the world that surrounds you, to the society, to the people with whom you have to live. It helps you to become a little more adjusted.

Capitalist, communist, whatsoever the society is — Hindu, Christian, Mohammedan — it doesn’t matter; the individual is a danger because the individual tries to live out of his own light. He does not follow anybody. He is not a follower, he is not an imitator. Buddha gives a psychological religion. Religion means he helps you to understand the mind so that you can go beyond it — not so that you can become adjusted to the collective but so that you can rise to the heights of your individuality, to the peaks of your destiny.

Psychology believes that man lacks meaning in his life and meaning can come only through therapy. Psychology in essence means meaning through therapy. And religion is just the opposite; religion means therapy through meaning. Religion gives you meaning first and then automatically the meaning becomes a healing force, it becomes therapeutic.

Buddha says again and again that, “I am a healer,” that “I am a physician,” that “My function is not that of a philosopher but that of a physician. I help people to become healthier, to become whole.” And what is his process? His process is to impart meaning to your life. That too he does in a profoundly new way; it has never been done before like that.

He does not give you an arbitrary meaning because the arbitrary meaning will be seen sooner or later to be arbitrary, and the moment it collapses you will fall into deep darkness. The darkness will be far darker than it was before. Now you have lost meaning. You will feel suicidal; you will not feel life is worth living at all. Even breathing will become hard, difficult. The question will arise: Why? Why should I go on living if there is no meaning?