Osho – God is the eternally unknown. Even by knowing him, one never knows him 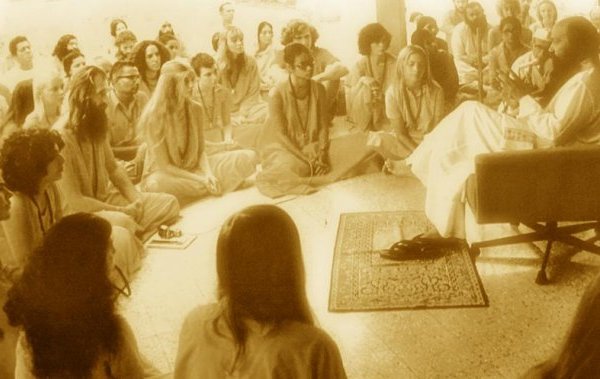 Question – The sky and the plants can bring me to my knees and there is a heartache for something unknown.

Osho – Yes, God is the eternally unknown. Even by knowing him, one never knows him; even by knowing him, he remains unknown. His unknowability is his mystery. And it is good that man cannot know him, otherwise he will become part of science, otherwise he will be just caught in a test tube somewhere in a lab. And you know what scientists can do. They will torture him if they can find him. They will poke him from here and there to find out secrets, just as they are torturing monkeys and other animals. They will torture God if they can find him.

St. Paul destroyed it because he started teaching people and he laughed at the stupidity of this temple. He is reported to have said that it was absolute foolishness. How can you love an unknown God? Here he was and he would show them the known God. God had become known in Jesus Christ.

He was thinking that he was doing a great service to humanity but he is one of the greatest criminals. He destroyed the concept, or no-concept, of an unknown God. That is the only God there is. He may have been reflected in the eyes of Jesus but he still remains unknown. In fact, by knowing him, he is not known, you also become part of his mystery and become unknown. Jesus has become a mystery by knowing him — not that he has become known through Jesus. There is no way. He is so vast it is impossible to put him down as a formula, as a theory, as a dogma, as a creed.

Forget the word ‘God’. Don’t make that your obsession. It has nothing to do with God. You can drop the word. Dropping the word will be helpful, because with that word, all that theologians have done up to now will be dropped. You just look around, look into the eyes of a child, or into the eyes of your beloved, your mother, your friend — or just feel a tree. Have you ever hugged a tree? Hug a tree. And one day you will come to know that it is not only that you have hugged the tree but that the tree also responds, the tree also hugs you. Then for the first time you will be able to know that the tree is not just the form, it is not just a certain species the botanists talk about, it is an unknown God — so green in your courtyard, so full of flowers in your courtyard, so close to you, beckoning you, calling you again and again.

Forget the word. Forget all words! If you can dedicate your being to the unknown, that is the best dedication possible. Theologians, priests, and people who do the business of religion have different things in their minds. They are not concerned with you or with God. Religion has become a great investment. In fact, it is the biggest trade in the world. No millionaire is so rich — and he cannot be — as churches are. No company Burmah Shell or Standard Oil — is so rich, they cannot be. When religion becomes an investment, then there are other reasons than religious, other considerations.

I have heard an anecdote — it happened in a Jewish temple. Jewish temples and synagogues do not pass the plate as do the Christian churches, consequently they have to raise money in other ways. One of them is the sale of tickets for reserved seats for the high holy days when business is best.

On one holiday a young man went to the synagogue in Philadelphia to look for his uncle. The guard refused him admittance because he had no ticket.
‘Look’, the youngster said,’it is very important.’
‘Not a chance,’ said the guard.’Everybody says that. Nobody gets in here without a ticket.’
But the boy pleaded,’ It is a matter of life and death. Please, I will only be two minutes.’
‘Well okay, if it is so important,’ the guard said.’But don’t let me catch you praying!’

This can happen in this ashram also. This happens always. Because whenever something of the unknown descends on the earth, immediately man’s cunning mind starts changing it into a commodity that can be sold in the market. Immediately the profit motive comes in. The word ‘God’, the churches, the temples, the synagogues, they have become marketplaces. You cannot find your heart there. The only way to find your heart is to see the unknown again. You will have to move alone, you will have to go alone. You cannot follow a crowd. If you follow a crowd you will reach some temple, or some synagogue, or some church. If you want to find the wild God, the God of this universe, the unity, the cosmos, then you will have to seek on your own, alone.

Pray to a tree, pray to a river, pray to a rock. Feel, there is no need for words. Let your heart communicate. Melt yourself into the world and let the world melt into you. This communion is prayer. The person who has asked the question will be helped if he moves on the path of love. Zen will not be helpful for him. He has a very feeling heart. Listen to the heart.