Osho – Heartache is a positive thing. Headache is a negative thing 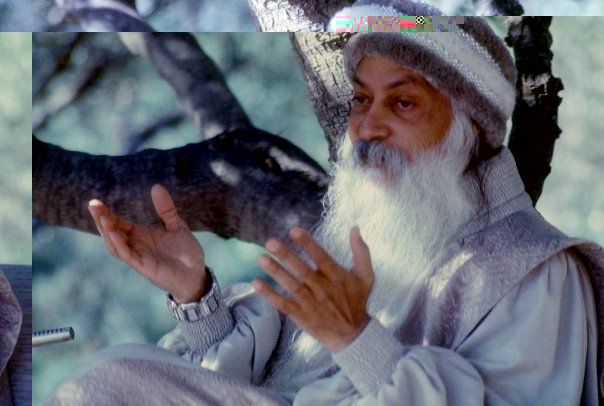 Question – My heart aches. such a tiny crevice of it feels able to open to you. I want to melt and flow around you like a puddle; and i don’t know how. Somehow my heart knows what it would feel like to open totally to you, and because it does not, it aches. and i shake and want to force, knowing that i can’t. I love you such a tiny bit and it is beautiful.

MY HEART ACHES. SUCH A TINY CREVICE OF IT FEELS ABLE TO OPEN TO YOU. Good. Help it to ache more; and don’t try to avoid it, and don’t try to get rid of it, because heartache is a positive thing. Headache is a negative thing. Headache is a disease; heartache comes only to those who are starting to be healthy and whole. Heartache is holy. The word is the same: ache. That creates difficulty. Remember it, never forget it: whenever the heart aches, it shows that you are getting deeper into your being.

Love has its own ache. But blessed are those who attain to that ache of love. By and by the heartache will grow more and more. It will become intenser and intenser. Help it, so that it becomes a flame. You burn, but that burning is beautiful, because that fire will burn only the ego, not you. You will come out of it purified, like pure gold.
MY HEART ACHES. SUCH A TINY CREVICE OF IT FEELS ABLE TO OPEN TO YOU. Remember this too: that love never feels enough. Love always feels that it is not yet enough. That is a sign of love, it never feels enough. You can never feel enough love, you can never feel more than enough love. It is the very nature of love that it always feels that more is possible. “I can give more. I can flow more.” Love is an infinity. So howsoever you open, you will always feel more is possible. It is a journey which begins, but never ends. Love’s journey begins, but never ends. It is eternity.

I WANT TO MELK AND FLOW AROUND YOU LIKE A PUDDLE; AND I DON’T KNOW HOW. Nobody knows, nobody has ever known, nobody will ever know, because it is not part of knowledge. But you are already on the way; so move in the same direction. Allow it to ache more. Enjoy that ache. Delight in it, and help it. Don’t fight it. Surrender to it. Don’t stand aloof, don’t be a watcher, don’t separate yourself. Be drunk with it, get involved in it, be absorbed in it — so much so that only the heart aches and you are not there to watch and see. Only the heartache remains, and you have disappeared. Then it becomes a tremendous ecstasy. It is a birth pang; yes, a birth pain. One is reborn through it.

The heart is the seed of God. It carries the whole plan in it. It carries your destiny, and your destiny is tremendously great. The seed may be very small, maybe a mustard seed. The small ness of the seed is not the point — don’t be deceived by the smallness of it. It may just be atomic. It may not even be visible to the eyes, it may not even be visible to the greatest magnifying glass, it may be so tiny. It is very small — very small, atomic.

Just look at a small seed — can you imagine what it can become? A tree can be born out of it, a great banyan tree, and then millions of seeds through this one seed. Scientists say that a single seed can fill the whole earth with greenery. A single seed can fill the whole universe with greenery, because there is no ‘finitude’ in it; it is infinite.

Each single heart can fill the whole universe. You will never be able to know what it is if you try to know through the mind. But if you relax into the heart, you will know in a very strange way. That is the way of the mystics, not of the intellectuals; that is the way of the poets, not of the philosophers. You will know it in a poetic way; you will know it, and it will never become knowledge. It will remain knowing, a groping; and it is beautiful, because whenever something becomes knowledge, it is already dead. Whenever you have known something, finished — then you are no more interested in it.

Love can never be known that way. It always remains unknown. It goes on alluring, it goes on invoking, it goes on calling you further and further. One peak, somehow, you reach; another peak is waiting. Another peak you reach; more doors open, more peaks are there waiting for you. It is an infinite journey. One knows, and yet one never knows.

MY HEART KNOWS WHAT IT WOULD FEEL LIKE TO OPEN TOTALLY TO YOU, AND BECAUSE IT DOES NOT, IT ACHES. AND I SHAKE AND WANT TO FORCE KNOWING THAT I CAN’T. I understand. And you have observed your heart perfectly well. This is how it happens: you know nothing can be done, you know that doing will only disturb; yet you go on thinking, you go on wishing that something may be there, that something can be done — maybe, perhaps. And you know all the time nothing can be done, because it is not a question of doing. But still, the heart goes on feeling that perhaps there is a way.

One hangs, as if in a mist. But that is how one grows. Nothing can be done, and I know that nothing can also be done about the thinking that goes on thinking that maybe something can be done. Nothing can also be done about that. So accept that too; that too is part of the heartache. Accept whatsoever it is; and in total acceptance is transformation. You relax. Don’t fight. Remember, this is very delicate. Because whenever I say relax, you think now you are not to think; now you are not to do anything; now you are not even allowed to think about what to do. Then you have misunderstood me.

Now it becomes even more subtle. If fight arises, what will you do? Let go, let the fight be there. This is the delicate thing about it, that at whatsoever level you start fighting, drop fighting. Do you understand me? When I say ‘drop fighting’, don’t START dropping it, because then you are not dropping, then you have started a new fight against fight.

It is tremendously significant. Let me repeat. I tell you not to fight, but fight arises. What will you do? Let it be. And I have been telling you not to fight, and fight arises. What should you do? Let it be. That is what I mean when I say don’t fight — at whatsoever level struggle arises and you become concerned and you become separate from the on-going process — don’t do that. Relax. Let it be, whatsoever it is. Accept whatsoever it is unconditionally, and by and by you will become aware that that is the only way to be, and the only way to be blissful, and the only way to be blessed. A totally different plenitude is attained when you relax.

… AND BECAUSE IT DOES NOT, IT ACHES. AND I SHAKE AND WANT TO FORCE, KNOWING THAT I CAN’T. Let it be so. Know that you can’t… still it goes on: accept it.

I LOVE YOU SUCH A TINY BIT, AND IT IS BEAUTIFUL. Love is beautiful, even a small window into the sky of love is beautiful. Of course, only a small part of the sky can be seen from the window, but it is still part of the sky. Sooner or later you will have to come out of the house; that which is beautiful will draw you. You will by and by be forced to come closer and closer to that which you love, that which is beautiful. Suddenly you will be running towards it; you will forget all about the house, the enclosure that you have been living in for lives together. Suddenly, in a deep ecstasy, you are out of the house, under the sky.