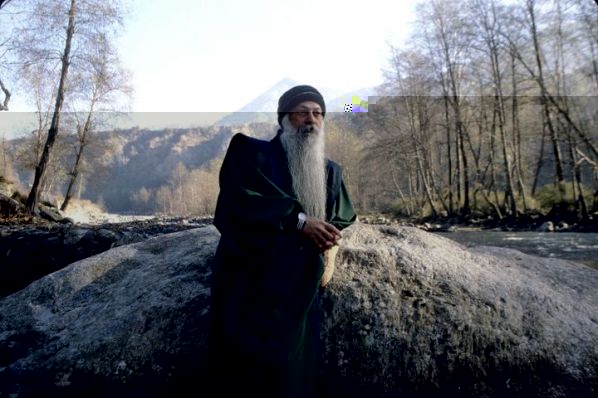 Osho – What is the message of Heraclitus, the deepest message? Understand so you can follow. He does not believe in things, he believes in processes — process is God to him. And if you watch closely, you will see that THINGS don’t exist in the world; everything is a process. In fact to use the word “is”, is existentially wrong, because everything is becoming. Nothing is in a state of isness, nothing!

You say, “This is a tree.” By the time you say it, it has grown; your statement is already false. The tree is never static, so how can you use the word, is? It is always becoming, becoming something else. Everything is growing, moving, in a process. Life is movement. It is like a river — always moving. Says Heraclitus, “You cannot step in the same river twice,” because by the time you come to step into it the second time, it has moved. It is a flow. Can you meet the same person twice? Impossible! You were here yesterday morning also — but am I the same? Are you the same? Both rivers have changed. You may be here again tomorrow, but you will not find me; somebody else will be here.

Life is changing. “Only change is eternal,” says Heraclitus — only change never changes. Everything else changes. He believes in a permanent revolution. Everything is in revolution. It is how it is there. To be means to become. To remain where you are means to move; you cannot stay, nothing is static. Even the hills, the Himalayas, are not static; they are moving, moving fast. They are born, then they die. The Himalayas is one of the youngest mountain ranges in the world, and it is still growing. It has not reached its peak yet, it is very young — every year it grows one foot. There are old mountains whose peaks have been attained; now they are falling down, old, their backs are bent.

These walls you see around you, every particle of them is in movement. You cannot see the movement because the movement is very subtle and fast. Now physicists agree with Heraclitus, not with Aristotle, remember. Whenever any science reaches nearer to reality, it has to agree with Lao Tzu and Heraclitus. Now physicists say everything is in movement.

Eddington has said that the only word which is false is rest. Nothing is at rest, nothing can be; it is a false word, it doesn’t correspond to any reality. “Is” is just in the language. In life, in existence, there is no “is”; everything is becoming. Heraclitus himself, when he says about the river — and the symbol of the river is very, very deep with him — that you cannot step in the same river twice, he also says that even if you do, you are the same and you are not the same.

Just on the surface you look the same. Not only has the river changed, you have also changed. It happened: A man came to Buddha to insult him — he spat on his face. Buddha wiped his face and asked the man, “Have you anything more to say?” — as if he had said something. The man was puzzled, because he never expected this type of response. He went away. The next day he came again — because the whole night he couldn’t sleep; he felt more and more that he had done something absolutely wrong, he felt guilty. The next morning he came, fell at Buddha’s feet and said, “Forgive me!”

And Buddha said, “Who will forgive you now? The man you spat upon is no more, and the man you were who spat is no more either — so who will forgive whom? Forget about it, now nothing can be done about it. It cannot be undone — finished!… because nobody is there, both parties are dead. What can be done? You are a new man and I am a new man.”

This is the deepest message of Heraclitus: everything flows and changes; everything moves, nothing is static. And the moment you cling, you miss reality. Your clinging becomes the problem, because reality changes and you cling. You loved me yesterday; now you are angry. I cling to the yesterday and I say, “You have to love me, because yesterday you were loving and yesterday you said you would love me always — now what has happened?” But what can you do? And yesterday when you said that you would love me always, it was not false, but it was not a promise either — it was simply the mood, and I believed in the mood too much. At that moment you felt it, that you would love me always and always and always, forever; and it was not untrue, remember. It was true to the moment, that was the mood, but now that mood has gone. The one who said it is no more.

I have heard: One night Mulla Nasruddin’s wife said, “You no longer love me, you no longer kiss, you no longer hug me. Remember when you were courting me? — you used to bite me and I loved that very much! Can’t you bite me once more?”
Nasruddin got out of his bed, started walking. His wife said, “Where are you going?”
He said, “To the bathroom to get my teeth.”

No, you cannot step in the same river twice. It is impossible. Don’t cling; if you cling you create a hell. Clinging is hell, and a nonclinging consciousness is always in heaven. One moves with the mood, one accepts the mood, one accepts the change; there is no grudge, no complaint about it because this is how life is, things are. You can fight, but you cannot change.

When somebody is young, of course there are different moods because youth has different seasons and moods. How can an old man have the same? And an old man will look very foolish with those moods. How can an old man say the same thing? Everything has changed. When you are young you are romantic, inexperienced, dreamy. When you are old all the dreams have gone. Nothing is bad in it, because when the dreams are gone you are nearer and closer to reality — now you understand more. You are less of a poet because you cannot dream now, but nothing is wrong. Dreaming was a mood, a season — it changes. And one has to be true to the state in which one finds oneself at a certain point.

Why do you want to be a permanent thing? Why do you want to be dead?… because only a dead thing can be permanent. Waves come and go, that’s why the ocean is alive. If waves stop, everything will stop in the ocean. It will be a dead thing. Everything lives through change — and change means changing to the polarity. You move from one pole to another; that’s how you again and again become alive and fresh. In the day you work hard, and in the night you relax and go into sleep. Again in the morning you are alive and fresh to work. Have you ever observed the polarity?

Work is against relaxation. If you work hard you become tense, tired, exhausted, but then you fall into the deep valley of rest, a deep relaxation. The surface is far away, you move to the center. You are no more the identity you are on the surface, no more the name, the ego; nothing from the surface is carried. You simply forget who you are, and in the morning you are fresh. This forgetfulness is good, it makes you fresh. Just try for three weeks not to sleep — you will go mad, because you have forgotten to move to the opposite.

If Aristotle is right, then if you don’t sleep at all, if you don’t move to the opposite, then you will become an enlightened man. You will be MAD. And it is because of Aristotle that there are so many mad people in the West. If they don’t listen to the East, or to Heraclitus, sooner or later the whole West is going to be mad. It is bound to be so because you have lost the polarity. Logic will say something else. Logic will say rest the whole day, practice rest the whole day, so that in the night you can go into a deep sleep — this is logical. This is logical: practice rest! This is what rich people do: they rest the whole day, then they have insomnia and they say, “We cannot sleep.” And they are practicing the whole day — lying on their beds, lying on their easy chairs, resting and resting and resting. And then in the night, suddenly they find that they cannot sleep. They have followed Aristotle, they are logical.

One day Mulla Nasruddin went to his doctor. Coughing, he entered. The doctor said, “It sounds better.”
Nasruddin said, “Of course, it has to sound better — because I practiced it the whole night.”

If you practice rest the whole day, in the night you will be restless. You will change sides again and again: that is just an exercise the body is doing so that some rest becomes possible. No — in life you cannot find a man more wrong than Aristotle. Move to the opposite: work hard in the day and you will go into a deeper sleep in the night. Go deeper in sleep, and in the morning you will find you are capable of doing tremendous work, infinite energy you have. Through rest one gains energy; through work one gains rest — just the opposite.

People come to me and they say, “We have insomnia, we cannot sleep, so tell us some way to relax” — they are Aristotelian.

I tell them, “There is no need for you to relax. Just go for a walk, a long walk, run madly — two hours in the morning, two in the evening, and then rest will follow automatically. It always follows! You don’t need techniques of relaxation; you need techniques of active meditation, not relaxation. You are already too relaxed; that’s what insomnia is showing, that you are already too relaxed — there is no need.”

Life moves through one opposite to another. And Heraclitus says this is the secret, the hidden harmony; this is the hidden harmony. He is very poetic, he has to be. He cannot be philosophic because philosophy means reason. Poetry can be contradictory; poetry can say things which philosophers will be ashamed to say — poetry is truer to life. And philosophers just go around and around: they never hit the point in the center, they beat around and around the bush. Poetry simply hits directly.