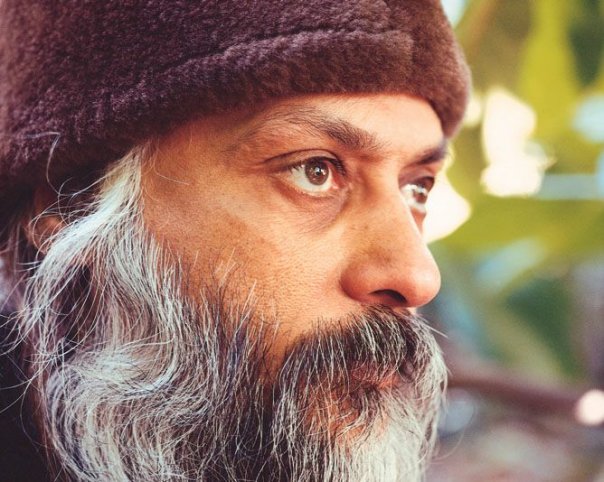 Question – When two Women or two Men are making love to each other. Does it do any harm to their energies?

Osho – Love is always preferable to lovelessness — that is the first thing to be remembered. Love in any kind and any form is more preferable than lovelessness. That is a basic assumption with me. But there are three planes of love. They have to be understood.

The first is auto, the second is homo, the third is hetero. One can be very narcissistic; narcissism is masturbatory. It has many dimensions to it. That is the first kind of love, the most primitive. Every child passes through that state of being narcissistic — he loves only himself, he is his own world. It is good as far as it goes. One has to love oneself; that should be the foundation. If you don’t love yourself you cannot love anybody else. If you can’t even love yourself, how can you love anybody else?

So the foundation is auto-erotic. Each child has to love himself, and parents down the centuries have been preventing it. That’s wrong. Children should be allowed to have fun; nothing is wrong in it. In fact, they are learning the first basic lesson of love — and they can love only themselves. Their consciousness is not so developed that they can bridge with anybody else. They have a small circle of energy; it moves within themselves.

So the first is auto; that is natural. It has been disturbed, it has been disturbed so much that the disturbance persists the whole life. Then other kinds and other planes of love are never as perfect as they could have been. It is only in this century that psychological investigations have proved that auto-love is perfectly natural, normal, and each normal child will be interested in it and he is not to be prevented.

First the body has to be loved, in deep reverence. In a more enlightened age, children will be taught how to love their body with respect, reverence, because the body is the temple of God. And from there their love will start flowering and will take a right direction.

The second kind of love is homo. That too is normal, natural. First the child loves himself, and then, naturally, he loves somebody who is like himself — that is a natural growth. A boy cannot suddenly love a girl, that is going too far. The girl is so different, another kind of animal. The girl cannot love the boy immediately, a bridge is needed. To move from oneself to the opposite polarity one has to go through somebody like oneself. So from the masturbatory stage love moves to the homosexual stage. The boy will love a boy, the girl will love a girl. This is perfectly natural; there is nothing of pathology in it.

Pathology comes in only when somebody is stuck. If somebody is stuck at the first stage and is not able to love anybody, then there is some pathology. Then somebody can be stuck at the second stage — the second stage is better than the first but lower than the third. One should take the jump and the man should be able to love the woman, and the woman should be able to love the man. That is the hetero stage — the polar opposite. This is the natural course.

And then there is the fourth kind — the transcendence.. When you have passed all these three stages naturally, totally, a moment comes when you transcend sexuality. You are no more interested in sex — sex as such — your body, somebody else’s body . Men’s or women’s bodies don’t interest you. Not that you have any condemnation about the body; in fact, bodies disappear — there are only souls. The body is just the outermost core of it. It is a great shift in your consciousness. That is the fourth stage, the stage of the SIDDHA. In India we have called the fourth stage BRAHMACHARYA — the state of being divine.

Now there are a few things to be understood. The hetero relationship is the most difficult relationship, the most inconvenient, conflicting, because two opposite polarities are there — man and woman. They exist differently, hence they are attracted to each other… because they are so different, so mysterious to each other.

Man has never been able to understand how the mind of the woman functions, and so is the case from the woman’s side too. They are such different dimensions, hence the attraction to explore each other. But the difficulty is also there. Men and women love each other and hate each other; are together and are continuously nagging, fighting, struggling. There is a constant effort to dominate the other.

The second stage — homo — is far better as far as convenience is concerned. Two men or two women are perfectly at ease with each other; they belong to the same mind, the same quality of energy; they are similar. The homosexual relationship is less troublesome. That’s why homosexuals look gay and heterosexuals look very sad. They are happy people because they are not in a constant fight and struggle and nagging. They understand each other. Lesbians are also happier women — because there is no problem, they function on the same wavelength, so things fit together, there is a rhythm, a kind of harmony. But fulfilment is also less.

Always remember: for the higher you have to pay higher. If you want deep fulfilment you have to take the trouble and you have to stake your life. It is risky.

Because of too much risk, many people have turned homosexual in the world — this world, this century, particularly. People have become alert about heterosexual relationship as being ugly. Continuous fight — who bothers? The whole life is so troubled. One wants to be happy somewhere at least. And even in love there is the same trouble and the same conflict and the same ego struggle. People are turning towards homosexuality. That is relapsing back. It is not good.

Now, all over the world religious people have tried for celibacy, but they have not tried it in a scientific way. Somebody simply jumps into celibacy from his childhood. Then your so-called monks remain masturbatory. It is a suspicion of the psychoanalysts — and I think they are right — that the Buddhist monks, the Catholic monks, and all kinds of monks and nuns become masturbatory. Or, the second possibility is that they will turn to homosexuality. Because monks are not allowed to mix with nuns and nuns are not allowed to mix with monks, there is every possibility that they will turn homosexual. That’s what happens in schools, colleges, hostels, in the army, wherever there is only one sex available — people tend to become homosexual. Army people are homosexual.

If you want to avoid homosexuality in the world the army should not be monosexual — there should be women and men together. And the hostels should be for both together, not separate. Then homosexuality will disappear.

Homosexuality has a function to fulfil in the growing child. Somewhere from the first year to the seventh the child remains masturbatory. From the seventh year to the fourteenth the child turns homosexual. From the fourteenth onwards he should, if things go naturally, in a natural way, turn heterosexual. And by the age of forty-two he will start being a celibate. And that celibacy will be a natural, spontaneous phenomenon, not a repression.

I would like to tell you one anecdote.
‘There are those in this congregation,’ shouted the revivalist, ‘who have committed the unutterable sin of he-ing and she-ing. Stand up and repent!’ Three quarters of the congregation stood up.
‘And those who have committed the double sin of sins: he ing and he-ing. Stand up!’ The rest of the men got up.
‘And I positively know that there are those who have committed that triplest of triple sins: she-ing and she-ing!’ The remaining women all rose, sobbing hysterically. No one was left sitting but one old man.
‘Elder,’ he muttered, ‘how do you stand on me-ing and me-ing?’

These are the four possibilities, in fact, three possibilities of your sexual energy. Either, auto — but auto becomes closed, you become an island. Or, homo — you make a bridge, but you make a bridge man with man, woman with woman. It is not much of a bridge because both are the same. Not much difference is there. Or, hetero — the real pole, polarity, and the real bridge. And only when you have bridged your sexual energies with the polarity does a new kind of integration arise in you, and that integration can become BRAHMACHARYA, can become celibacy.

Don’t think these are sins! These are natural growth points. The only thing to be remembered is: don’t get stuck anywhere. The goal is BRAHMACHARYA, one has to go beyond sex. It is not that there is something wrong in sex, but that which through sex you will have only glimpses of, can be attained totally when you go beyond. In a sexual love moment, for a single second, time disappears, space disappears. For a single moment ego disappears. For a single moment you are lost into the cosmos. That’s why there is so much joy, so much ecstasy. That’s what orgasm is — the individual is lost into the whole.

But this happens only for a single moment, and not even always. So sex only opens a window and closes it again. You have to go beyond sex. Going beyond sex means going beyond the house, the confinement, going under the sun, going into the open sky. Then that ecstasy is yours, and it is constantly yours. A real saint, one whom I call a saint, is continuously in orgasm — that is my definition of a saint. His ecstasy is a natural phenomenon like breathing.

You may not have ever heard a definition like that, but that’s my definition. Jesus or Buddha or Mohammed are continuously in an orgasm. They don’t need anybody, they don’t need to connect with anybody, they don’t need any kind of sexuality. Their energy is constantly orgasmic because they have disappeared into the whole. The part no more exists, no more claims to be the whole. The part has become the whole, the wave has become the ocean — and that is their orgasm, that is their ecstasy.

Out of this ecstasy great songs have been born — Upanishads, Dhammapada, Jesus’ sayings. They are nothing but ecstatic ejaculations, ecstatic expressions. They have tremendous beauty and poetry.

Remember this. These three stages are normal, there is nothing to be condemned in them, but don’t get stuck anywhere. Always go beyond. You have to go beyond, you have to go beyond all kinds of sexuality. Sex is natural, beautiful, but to get stuck in it is to become dormant. Sex gives you glimpses of God. It makes you aware of God. Then one has to seek God in its purity.

Source – Osho Book “Sufis: The People of The Path, Vol 1”