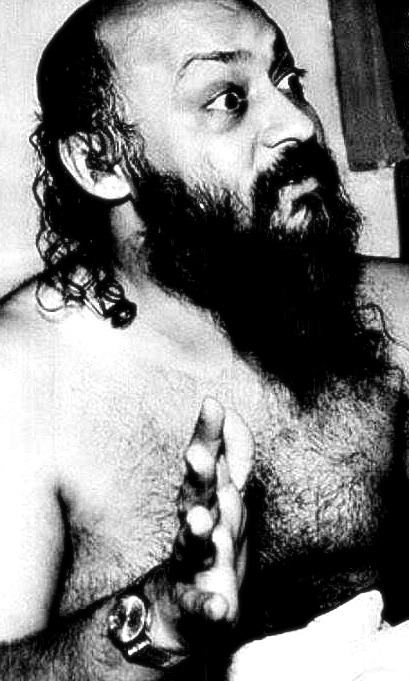 Question : [A new sannyasin asks about his soulmate, a non-sannyasin, who is sitting a few rows away. “I wish that she could also look into your eyes for just a few seconds, to receive your energy…”]

Osho – That is not possible without becoming a sannyasin… for certain reasons. Because unless you are a sannyasin you will not be able to receive it. Sannyas is not just a formality. From your side it is a readiness to receive, a gesture that you are open. A disciple has to be as open as a womb — a disciple has to be a womb. Only then can the energy be received. It is not only a question of my giving; it is more a question of your taking. And one who is not ready to be a sannyasin will not be able to take it. Then I am helpless. I would like to give…

To be a sannyasin simply means: it is raining — you just put your pot under the rain in the right position. It you put it upside-down, it will go on raining but you will not collect a single drop of water. To be a disciple is to be in the right position: surrender is just a certain posture of receptivity, of trust, of love. And the orange and the mala are just outer expressions of it.

There are cunning people who say ‘Inwardly we are sannyasins.’ That is just cunningness, rationalization. If you are inwardly ready then you will be outwardly ready too. Then why worry? People will laugh at the orange or people will think you have gone crazy or something… so let them! Love always knows how to sacrifice lovingly, how to sacrifice blissfully. Love is the way of the moth. It knows how to jump into the flame and die.

So tell her: whenever she is ready to be a sannyasin… I am here for my sannyasins, my whole energy is for them. But she will have to gather courage to be a sannyasin; otherwise it will not be possible. I have been working for years with many kinds of people. Finally I decided: unless somebody is really ready it is a wastage. Unless somebody is ready to pay for it, it will not be received. You can give but it will not be received. People receive only when they pay for it, and the higher the price, the deeper it goes.

George Gurdjieff used to ask fantastic prices for his books. He would not sell them at bookstalls. Anything that came to his mind he would ask… and fantastic prices for his lectures. Those lectures would only be announced one hour before, and the person might be twenty miles away. He would be informed by phone ‘The lecture is going to happen at eight o’clock — rush!’ It would happen that people would come from faraway places immediately, and when they arrived it would be announced that it was cancelled — tomorrow.

Once he did it for eight days continuously. At the eleventh hour people would be informed. They would come — and they had paid for it — and then it would be cancelled. On the first day four hundred people came; by the eighth day there were only four. He looked and he said ‘Now, the right people are left. Now I can speak. These are the people,’ he said, ‘who will understand. They are ready to pay: eight days continuously without complaining, “What nonsense this is! Why do you harass us?” Not even a single grudge, no complaint.’ This is surrender, this is trust: If he is doing this then there must be something in it.
I travelled all over India for years, and slowly slowly I saw the point — that I can go on giving but it only reaches people who pay for it.

Osho – If you have decided to remain thirsty, it is up to you