Osho – If you allow children, they can become very dictatorial; they can really exploit you 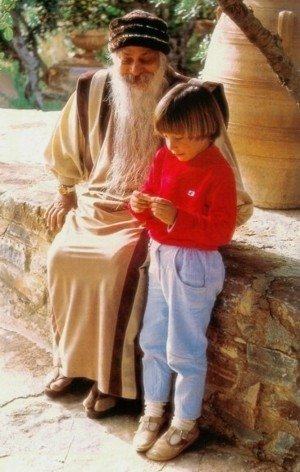 [A sannyasin, present with his five-year-old son says: I would like to talk about the relationship with my son. He is a very beautiful and rich child, but I feel he demands too much energy from me and needs much attention. I am in a struggle between feeling guilty and sacrificing myself. Is it possible to have a balance?]

Osho – Yes, it is possible. Just one thing has to be understood. If you allow children, they can become very dictatorial; they can really exploit you. That is harmful to you and it is not good for them either, because once you allow yourself to be exploited and you have to give attention and love beyond your limits and you start feeling that this is too much, then somehow you will be taking revenge. Later on the child will grow into a world which is not going to bother about him, and he will always expect the same from everybody else. His expectations will be too much, and they will create frustrations. He will condemn you then – and it is logical too – and say, ’My father destroyed me.’

Give love, but don’t allow yourself to be dominated. The distinction is subtle but has to be understood. Give love when you feel like giving. When you don’t feel like giving, then don’t be bothered, because you are not here just to fulfill your son’s desires. And you are giving him a wrong example – he will do the same to his children. And always remember – sacrifice is not good, because you cannot forgive and you cannot forget once you sacrifice. You will never be able to forgive the son.

But he cannot be made responsible. He is not alert, he is not so conscious. You are more conscious. Your responsibility is the greater. Give your love but don’t be dominated. Make it clear…. And children are very perceptive. Once they know, once it becomes clear that you cannot be coerced, they become practical. I have never seen children very philosophical. They are always very down to earth. They know what is possible – and only then do they do it. If it is impossible, they won’t do it.

Once I was staying with a friend, and the couple went out and told me that their small son is there, so I have to look after him. I said, ’Let him play.’ He fell from the stairs and was hurt. He looked at me, and I sat there like a buddha (much laughter). So he looked at me, watched closely, and then thought, ’It is useless; to cry or to weep is meaningless, because this man seems to be almost like a statue.’ He started playing….

Half an hour later when the parents came back, he started crying. So I said to him, ’This is illogical because now there is no problem. If there was Pain or some hurt, half an hour has Passed – you should have cried before.’ He said, ’What was the point? I knew well that you were not going to be bothered. I had to wait!’ Children are very very practical.

So you have to be alert. You are doing something wrong. And once they know that you can be coerced easily, they will coerce you. So just give your love as much as you want, but not under coercion. It should be voluntary. For a few days it will be a little difficult because you must have made a habit, but the sooner you mend it, the better – better for you, better for him.

So from this moment become a little alert about it. For ten days, don’t allow him to force you, and then tell me how things are going. He will understand tomorrow. Children are never foolish, never stupid. Stupidity comes only later. Up to the age of seven, children are very intelligent. In fact stupid children are not born – only intelligent children. Then by and by stupidity is learned; it is not a natural thing. He will understand tomorrow. Just make it dear. Just as two plus two is four, make it clear to him. He will try the old tricks but he will see that they are not working and he will drop them, mm?