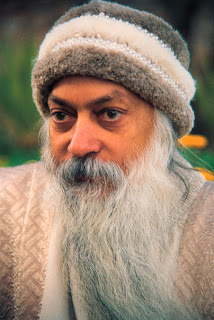 Gautam Buddha Sutra –
“IT IS NOT IRON THAT IMPRISONS YOU
NOR ROPE, NOR WOOD,
BUT THE PLEASURE YOU TAKE IN GOLD AND JEWELS,
IN SONS AND WIVES”.

He says: IT IS NOT IRON THAT IMPRISONS YOU NOR ROPE NOR WOOD, BUT THE PLEASURE YOU TAKE IN GOLD AND JEWELS….
Now one thing very significant has to be remembered: this sutra has been misinterpreted for centuries. Twenty-five centuries of misinterpretation are there. For the first time I am telling you that it does not mean what Buddhists have been saying that it means. They think it means that gold and jewels have to be renounced; it does not mean that — it is so clear — BUT THE PLEASURE YOU TAKE IN GOLD AND JEWELS…. It is not the gold that binds you but the PLEASURE that you take in it. If you don’t take pleasure in it you can live in a palace and you are as free as anybody who lives in a cave in the Himalayas.

If you take pleasure in your cave in the Himalayas you are as unfree as anybody who lives in a palace. The question is psychological. And one thing more: why do you take pleasure in the palace, in gold, in jewels, in diamonds? They all decorate your ego. Your ego is empty in itself, it is nonexistential. You have to continuously go on pouring things into it so it goes on giving you the sense that it is something substantial. It is constantly demanding, “Give me this, give me that.” It goes on demanding. It exists in the demand, it exists in the desire.

I know many so-called saints who go on bragging still after thirty or forty years. Forty years before they had renounced the world and they still go on saying that “We renounced so much money, so much gold.” Still they go on talking about it! Forty years have passed, but they are still taking the pleasure.

You see the point? You can take pleasure when you HAVE gold, you can take pleasure when you RENOUNCE gold. In fact, when you have gold you can’t take so much pleasure as when you renounce it. Why? — because millions of other people have gold, it is nothing very special. But when you renounce you are a rare person: your ego becomes more extraordinary, holier-than-thou, superior. I know one person who was a homeopathic doctor. Now, you know about homeopathic doctors — they somehow manage to live.

And then one day I heard that he had renounced the world; he became a saint. After three years I met him in Calcutta. He was worshipped, and people were telling me that he had MILLIONS of rupees that he renounced. I said, “Don’t be stupid — I know this man! He had only three hundred and sixty rupees in the bank!” Now they have become millions!
When you renounce you can go on increasing your amount; nobody can prevent you and nobody can check on it — no auditing is possible. You can go on spreading the rumor how much you have renounced.

When I saw him, I asked him, “Doctor….”
He said, “I am no longer a doctor.”
I said, “You are still the same. I know perfectly well that you had three hundred and sixty rupees in the post office! What millions are you talking about? You should say simply that you have renounced three hundred and sixty rupees!”
He looked at me and he said, “Don’t talk so loudly. You will destroy my whole reputation!”

The reputation depends on how much he has left, so when he moves from one town to another, the amount that he has renounced increases. It has been going on that way. This is not something new; this has happened before, too.

Even in Buddha’s life story, Buddhists have written that he renounced so many golden chariots and so many elephants and so many horses and so many palaces. That is all nonsense, because he was not the son of a very great emperor or anything. The kingdom that he belonged to, Kapilvatu, was such a small place that it has almost disappeared from the earth, not even a trace…. All those palaces have not left any ruins. There were no palaces, and it was such a small village that to keep so many golden chariots there and so many elephants and horses would have been impossible. But the people who were writing the story had to go on making it look bigger and bigger.

There was great competition between the Jainas and the Buddhists because Mahavira and Buddha were contemporaries. So you can look in the scriptures…. Jainas write, “So many horses, so many elephants, so many chariots,” and the next Buddhist scripture makes a bigger claim. Then comes another Jaina scripture which makes a bigger claim than the Buddhist scripture — and this went on for hundreds of years, until now it appears as if Mahavira and Buddha were great emperors, as if they dominated the whole of India.

Buddha says: BUT THE PLEASURE YOU TAKE IN GOLD AND JEWELS… that is the real imprisonment; that creates your bondage — not the gold, not the jewels. What can they do? How can they bind you?

There is no need to renounce anything; just understand. MY interpretation of Buddha is that renunciation is not the point; UNDERSTANDING is the point. And if through understanding, something drops from your life, it is not renounced by you; it has simply fallen like a dead leaf from a tree. You cannot claim any credit for it.

Just look into your relationships with your wife, with your son, with your husband, and see the fragility of it all. It has no substance in it. It is all poetry and fiction, it is not a fact. Just a few days ago a man came to me and he said, “I would like to become a sannyasin, but my wife says she will kill herself!”

I said, “Let us try, for a change, because I have never seen anybody…. I have one hundred thousand sannyasins all over the world. No wife has yet killed herself, no husband has yet committed suicide, although many have said that.”

Mrs. Goldfarb stood weeping at her husband’s grave when a courtly stranger approached her.
“Madam, I regret the unfortunate circumstances under which I say this,” he began in a respectful manner, “but I must tell you I have fallen in love with you at first sight.”
“Loafer! Bum!” cried Mrs. Goldfarb indignantly, aghast at this monumental impertinence. “Get out of my sight this instant or I will call a policeman! Is this a time to talk about love?”
“I assure you, madam, that I did not intend to reveal my feelings at this sad time,” the gentle stranger explained, “but I was simply overwhelmed by your exquisite beauty!”
“Listen,” said Mrs. Goldfarb, “you should see me when I haven’t been crying!”
In a single moment things change. In this world, all your relationships are just made of the stuff poetry is made of; they are not even prose, they are fictions. People are living in fictions, and they go on painting, repainting their fictions; they go on keeping the fiction alive.
Mrs. Saperstein had just sent the children off to school when the phone rang.
“Is your husband’s name Philip Saperstein?” asked a sepulchral voice at the other end of the line. “What else?” replied the lady.

“This is the coroner’s office. I am sorry to tell you this, but we have a traffic death here. We found your telephone number in his pocket. Would you please come down here to the morgue and identify the body?”
Mrs. Saperstein arrived within half an hour and an attendant escorted her to a figure covered with a white sheet. The attendant then lifted a corner of the sheet and uncovered the victim’s face.
“Was this man your husband?” he asked.

Mrs Saperstein eyes widened. “Ai-ai-ai! How did you — yes, that is my husband — ever get your sheets so white?”
Don’t believe in fictions. Your wife, your husband, your children, your parents, all are beautiful fictions. And I am not saying to renounce them; I am saying, simply, understand the fictitiousness of them all. Live wherever you are, but don’t get identified with these imagined roles. Act, but don’t get identified with your acting role. That’s exactly what Buddha means