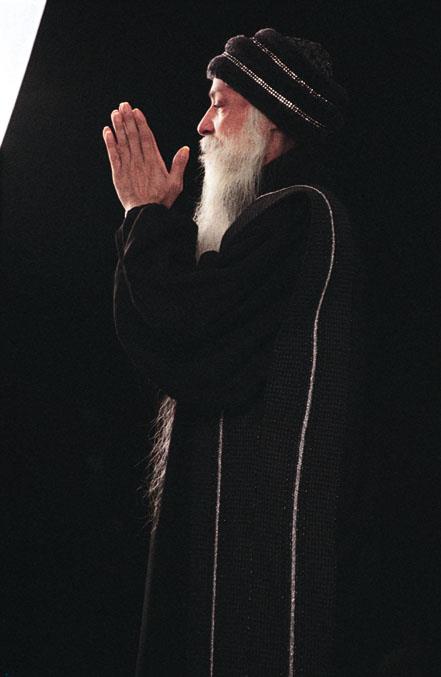 Question : Osho, i have fallen in love with chuang tzu, with joshu, with mumon, with bodhidharma. How can i not follow them? I feel already they have transformed me. How can i not be thankful?

Osho : Let me tell you one anecdote first. When Rabbi Nor, Rabbi Moudekai’s son, assumed the succession after his father’s death, his disciples noted that there were a number of ways in which he conducted himself differently to his father, and asked him about this. ‘I do just as my father did,’ he replied.’He did not imitate and I do not imitate.’

Meditate over this anecdote. He said,’I do just as my father did. He did not imitate and I do not imitate.’ If you really understand Joshu, Bodhidharma or me, you will not imitate — because I have not imitated, because Bodhidharma never imitated anybody.

Joshu used to say to his disciples,’If you utter Buddha’s name, go and rinse your mouth immediately.’ Joshu also used to say,’If you meet the Buddha on the way, kill him immediately.’ And he used to worship Buddha every day.

Ordinarily Zen looks puzzling, but it is clear-cut. It is following Buddha. When Joshu says,’If you meet the Buddha on the way kill him,’ he is a right disciple because that was Buddha’s essential message. When Buddha was dying, his last utterance in this world was,’APPO DEEPO BHAVA’ — ‘Be a light unto yourself.’

Don’t follow anybody. Anand was crying, weeping because Buddha was leaving the body and he said to Buddha,’You are leaving and I have not yet become enlightened. What about me? What will happen to me? The world will be absolutely dark for me — you were the light. And now you are going. Have compassion on us.’ Buddha opened his eyes and said,’APPO DEEPO BHAVA. Be a light unto yourself, Anand, nobody can be a light for you.’

When Joshu says,’Kill the Buddha if you meet him on the way,’ he is a true follower of Buddha. In Zen, following is very, very delicate. Great intelligence will be needed if you want to be a follower of Zen. It is very easy to be a Christian or a Hindu; it is very mathematical. To follow Zen it is very, very delicate and poetic — because the very following means not following; because that is the message of the Zen Masters, don’t follow.

It is reported that it happened in China that a Zen Master had organised a great celebration. People asked him about it because that type of celebration was only arranged at one’s Master’s birthday. Nobody had ever known this man to follow anybody. He had been to a certain Master but it was known that the Master had refused to accept him as a disciple. So for whom was he celebrating?

He said,’Because that Master refused to accept me as his disciple, he is my Master.’
They said,’We don’t follow. What do you mean? When he refused, he refused. He never accepted you as his disciple.’

Zen is a little difficult to understand; its ways are very poetic, zig-zag. Christianity is like a super-highway; Zen is more like a zig-zag labyrinth in a forest. It turns, moves, sometimes in this direction, sometimes in that, sometimes in almost the opposite direction — you were going to the east and suddenly you turn and start moving to the west. But that’s how it is and that’s how it should be, because life is not mathematics and life is not like a super-highway. Life is wild. In fact, no path exists — you walk and you create your own path.

In fact, they don’t give you any discipline, they simply impart their awareness, because they know that any commandment, any fixed commandment, is going to become a slavery to you, it will not liberate you. And life changes so much that something that is right this moment may not be right the next moment, and you will be caught in your discipline. Discipline is rigid, discipline is dead, discipline never changes, discipline is not a process. Once fixed, it is fixed forever. Look at the Judaic ten commandments. Moses fixed them, he brought these commandments written on a stone, slabs of stone, dead. Now Jews and Christians have followed them and you may not improve upon them, you may not change them. Life goes on changing. They have become a dead weight and nobody follows them, but still people go on paying lip service to them.

Zen Masters have not given any rigid discipline to anybody. They simply impart their awareness. They say,’You be aware and you will find your discipline moment to moment.’

I have heard, it happened. The sales manager believed in super-efficiency.’Jones,’ he said to the new traveller,’you will take the nine forty-five to Leeds. Your task there will take you two hours and fifty minutes and you will have time for a sandwich and a cup of tea in the station buffet before catching the three forty-five to Manchester. At Manchester go straight to Mennin and Company and get the details of that order. That will take you thirty-five minutes which will enable you to catch the five-thirty back here. Is that all clear?’
‘Yes, sir,’ said the helpless representative. And off he went.

But at one the sales manager was enraged to receive a telegram from the new salesman which read: ‘Leeds buffet out of sandwiches. Stop. What shall I do?’

This is going to happen. If details are so important, this is going to happen. Zen Masters have not given any details. They simply impart their awareness and say,’You be aware. Awareness will show you the way in each moment. What is needed, you will know. Respond knowingly, alert, that’s all.’ How can it be decided beforehand what you should do? Who knows? Each circumstance is so unique that it is difficult to decide. And people who decide always encage humanity, imprison humanity.

Zen is a path of liberation. It liberates. It is freedom from the first step to the last. You are not required to follow any rules; you are required to find out your own rules and your own life in the light of awareness.

So keep your light of awareness there, keep your lamp burning — that’s all. Then you know what to do, where to move, where not to move. Once a rigid discipline is given it makes you a prisoner. So if you love Bodhidharma you are falling in a very dangerous love. If you love me you have fallen in a very dangerous love. I am not going to give you any rigid discipline. People ordinarily expect everything ready-made.

They want somebody else to fix their lives — because that’s how they have been brought up. Everybody says to them from the very childhood,’Do this, don’t do that.’ They have lived on do’s and don’t’s. From the mothers milk they have received commandments and they don’t know, if they are left to themselves, what to do. Even if sometimes they want to be left by themselves — because there is a deep urge to be free — they don’t know what to do. Again they will start finding somebody to lead them. People have been forced to become followers. You are not being trusted to become your own leader and your own follower.

Zen is a way which makes you the follower and the master. The Master is there just to indicate: subtle indications, very indirect. And if you are looking for rigid rules you are looking in a wrong direction.

And remember, you say that you have fallen in love with them, how can you not follow them? Love does not force anybody to follow: love wants to make you free, love wants to give you freedom. In fact, the person who is forcing you to follow him may be on an ego trip himself, may be trying to dominate you, may be trying to destroy you, may be trying to cripple you. No, people who have known don’t destroy you. They help you to be yourself, they don’t force you to follow them. They only want you to understand them. That’s enough. Understanding is more than enough. Nothing else is needed.

HOW CAN I NOT FOLLOW THEM? I FEEL THAT ALREADY THEY HAVE TRANSFORMED ME THROUGH YOU. HOW CAN I NOT BE THANKFUL? Be thankful, be grateful, but there is no need to follow them or imitate them.

If you think by following, you are paying a debt, then you are not grateful, you are bargaining. One day suddenly you will see that you have paid enough. Or you may even get annoyed that you have paid more than enough. And if you are paying your Master in any way trying to pay the debt — then you don’t love your Master, because these things cannot be returned back, there is no way. You can pay everybody else back but you can never pay your Master back — because it is not a bargain, it is not a commodity. He gives you out of his fullness, he gives you because he has too much and he does not know what to do with it, he gives you because he has to give — in fact, he is grateful to you that you accept it, he is grateful to you that you didn’t reject his gift. You could have rejected it. It is such a deep exchange that the Master is grateful to the disciple that the disciple accepted his gift, and the disciple is grateful to the Master that he thought him worthy. But there is no returning, you cannot pay it back. That would be almost profane, a sacrilege.

Duty is not a good word, it is a four-letter dirty word. Love is religious; duty is social. Love is spiritual; duty is moral. Love is of the transcendental; duty is legal. You serve your mother because you say,’This is my duty.’ Better not serve her, leave her and let her die, but don’t call it duty, it is ugly. If it is love, from where does this word ‘duty’ come in? Duty is something forced upon you; reluctantly you have to do it, it is a social obligation, a commitment. It is because she is your mother that you have to do it — not because of love. If you love her then you serve her, but then service has a fragrance. You are not burdened, deep down you are not thinking about when she is going to die, deep down you are not planning that when she dies you will be finished with this burden. You are flowing, flowing while you are serving her; you are enjoying it, it is a delight that your mother is still alive. When your wife is just your wife and not your beloved, then it is a duty, but when you love your wife, then it is different.

A friend of Mulla Nasruddin was talking to him. He said,’My wife is an angel.’
Mulla said,’But mine is still alive.’

We don’t love each other, we have forgotten the language of love. Feel thankful, feel loving, deep in gratitude, but go on your way. Try to create more awareness and understanding and intelligence. Radiate with intelligence to express your gratitude — there is no other way.