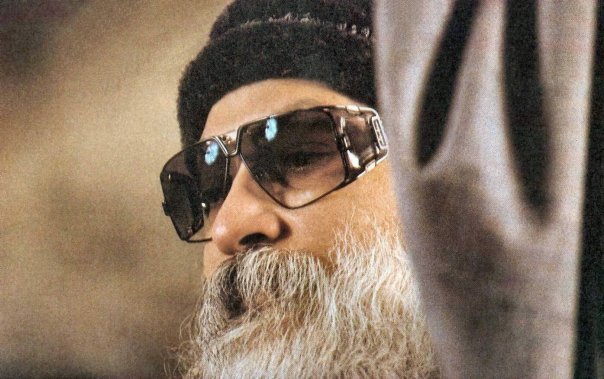 Question : Beloved Master, Your message is universal, but is it only for those without a religion? Why are not your fellow indians crowding at the gate to get in?

Only the most intelligent people will be interested in what I am doing here. Hence you will see gathering around me intelligent people from all over the world, young, fresh, intelligent. India is not young, it is not fresh. It is very rare to find an Indian who is young. In India everybody is born old. It is such an ancient country with such a long long tradition that everybody is burdened. A younger country is of course more receptive.

For example, America is more receptive to any new message than any other country for the simple reason that it is the latest country in the world — with only a three-hundred-year tradition, it is nothing. India has lived at least ten thousand years — ten thousand years according to the historians, one hundred thousand years according to Indians themselves. The truth may be somewhere in between. I can settle on fifty thousand years — but that too is very long. And as the country becomes old it goes on gathering rubbish, junk. And every generation goes on giving its junk and rubbish to the new generation, thinking that this is heritage, thinking that they are giving something very valuable.

America is the most receptive. And next to America, Germany seems to be very receptive for the simple reason that Adolf Hitler killed the old Germany completely, he destroyed the old completely. He created a discontinuity. The new German generation is no longer looking backwards. Adolf Hitler is standing there and nobody wants to look at him, so better forget all about it! Adolf Hitler has done a great service to Germany. He has destroyed the old heritage — not knowing that he is doing such good work, otherwise he would not have done it — not knowing that he is doing something immensely valuable. Unconsciously he has done it.

India also needs a discontinuity with the past. The past hinders. Hence people from other countries are coming to me more. And certainly one becomes curious, just as Gardiner has become curious: “Why are not your fellow Indians crowding at the gate to get in?”

India is too old, my message is too new. India is ancient, traditional; I am rebellious. There is no meeting ground between me and India. I am not an Indian, in fact. So please don’t call them “fellow Indians” — they are not. I am not an Indian, I belong to no nation; only then can I be universal. If I am an Indian, then I am already prejudiced in favor of India. Then my message cannot be universal; it will be deep down Indian, basically Indian — camouflaged, hidden behind beautiful words, abstractions, but it will remain essentially Indian; it can’t be universal.

Mahatma Gandhi used to say that the whole universe is one, all religions are one. In his ashram he used to teach that Hindus and Mohammedans and Christians are all one. In his prayer meetings all the prayers of all the religions were recited. He loved one prayer the most which says: ALLAH ISHWAR TERE NAM — Ishwar and Allah, both are your names, God.

But when he was killed he forgot all about Allah. He said, “Hey Ram!” Then the hidden Hindu came to the surface. His whole life he was saying, “Both are the same, both are names of the same.” But when the bullet went into his heart he forgot all his philosophy. It would have been really beautiful if he had said, “Allah!” But he said, “Ram!”

He used to say that the Gita and the Koran and the Bible have the same message, but he worshipped the Gita and he called the Gita his mother. Then what is the Koran? He has not even called the Koran his auntie! The Gita is his mother — and of course he has chosen a few pieces from the Koran and from the Bible which are in agreement with the Gita. Anything that disagrees with the Gita has not been chosen by him, so the Gita remains the criterion. Now this is so clear, that anything that does not fit with the Gita is wrong; it may be in the Koran, it may be in the Bible, but it is wrong. He would not say it so clearly because he was a politician.

Indians are not very happy with me, they cannot be. Neither am I very happy with them, so why should they be? I am utterly against their traditionalism, their egoistic idea that they are holier than everybody else in the world. Nobody is holier than anybody else. I am against their idea that their country is the only religious country in the world, that they are the source of all that is great. These are stupid ideas. Every country carries them and every country believes in them.

You ask the Chinese, you ask the Japanese, you ask the Italians, you ask anybody. Every country believes it. And you can find always great arguments to support it. Indians would have crowded at the gate if I was helping in some way, nourishing and feeding their ego. I am not doing that, I cannot do that. Only then can I be universal. I am continuously hammering on their ego. I am continuously trying to destroy their “holier-than-thou” look. They are angry at me. How can they crowd at the gate to come in?

If sometimes a few of them out of curiosity come in, within five to seven minutes they start getting up. Only a few stupid Indians get up from here. What I am saying does not suit them. They would like me to praise their Vedas as the only scriptures, the real scriptures, written by God himself. They would like me to praise everything that is Indian. I cannot do that. I can praise only that which is praiseworthy, not because it is Indian. I can praise things, not because they are Hindu, Jaina, Buddhist, but simply because they are beautiful.

That makes Indians very angry. They would like me to criticize Mohammed and to praise Mahavira, or if I cannot do that then at least praise Mahavira more than Mohammed, but create a hierarchy in which Buddha, Krishna and Mahavira are at the top. Yes, Jesus is also good and Mohammed is also good, but not at the top — far below in the hierarchy. That I cannot do because I see the same phenomenon happening in Buddha and the same experience in Jesus. I am not helping Indians’ ego in any possible way — I am doing just the opposite. They cannot crowd at the gate to come in.

What I am trying here is not something of the past; it belongs to the future. So only a few Indians will be able to come to me — a few Indians who are capable of rising above their Indian mind, very rare individuals who are ready to rise with me above nationality, above race, above all kinds of egoistic attitudes. They are here, but they are here because they are also no longer Indians.

Indians believe that they know, they are very knowledgeable. Naturally — it is an ancient country; you need not read the scriptures, the scriptures are in the atmosphere. And my idea is that the knowledgeable person can never be religious. And up to now India has believed in the knowledgeable person — the pundit, the scholar, the professor. And my effort is to help you become more and more childlike, more innocent, full of wonder not full of knowledge, full of awe not full of information. There is no need to read the Vedas — because anyway ninety-nine percent of the Vedas is absolutely rubbish! Now this hurts the Indians. Only one percent is beautiful; you have to be very choosy.

I have many Mohammedan sannyasins. They go on asking me when I am going to speak on the Koran, and I go on postponing it for the simple reason that there is not much in it to speak on. Very rarely do you come across a line one can manage to speak about in a beautiful way. Otherwise, just very ordinary statements….

And even when I speak on Buddha, Mahavira, Krishna, I speak in an absolutely nontraditional way. I speak out of my own experience, I am not a commentator. I love Buddha because I have known the same light, I have experienced the same truth. So when I comment on Buddha it is not a commentary. Buddha’s statements are only excuses, just pegs; I go on hanging myself on those pegs.

I know what buddhahood is! I go on creating Buddha again. That is resisted very much. They would like me to be just a historian, a commentator, a scholar. They would like me to quote their scriptures, refer to their scriptures. I never refer, I never quote. In my books you will not find any footnotes. I don’t believe in all that nonsense. I speak out of my heart. I love Buddha, I love Jesus. I speak, I use their statements as grounds to take off, that’s all — just jumping boards. It goes against the Indian approach, Indian scholarship.

Gardiner, because my message is universal it will appeal only to those people who ARE universal, who don’t belong to any country anymore, to any religion, to any church. Yes, you are right. You say, “Is it only for those without a religion?”

And you can see this is a universal gathering. People from at least forty countries are here. Except the Chinese and the Russians — except the communist bloc — you will find people from every country here. And even in Russia the orange people are starting to work underground. Small cells have started functioning. People are meeting really in underground basements, meditating. A few people even have become sannyasins. It is very difficult to send them malas and names, but we have found ways and they have found ways. They cannot wear orange in the open.

One woman who has become a sannyasin wrote to me, “What to do?” I said, “Use red instead of orange. Wear red and tell people that you love communism so much that you cannot resist the temptation of wearing red!” She loved the idea. She said, “This is beautiful!”

But when they meditate and they meet in underground basements they wear orange, they wear malas, they read the books, they listen to the tapes. They have even translated a few books into Russian; just hand-written, those books are passed from one hand to another. But they are not here; it will be difficult for them to be here.

One woman has written that she is ready to escape from Russia if somebody can help her so that she can remain here forever. She is ready to leave her husband, her home, her security, safety, everything. Soon from China and Russia also people will be coming here. This is becoming a universal temple — and it is especially for those who have no more interest in religion. They can understand me, because the priests have destroyed their interest in religion. The churches have destroyed any possibility for any intelligent person to be religious.

Source : Osho Book “The Dhammapada, The Way of The Buddha, Vol 9”