Osho – Instead of the soldier the sannyasin has to be praised 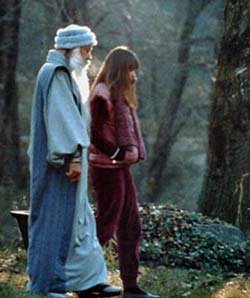 Osho – In the past we have praised warlike qualities very much because the whole past of humanity is nothing but wars and wars. In three thousand years we have fought five thousand wars. It is rare to find a single day when somewhere on the earth war is not going on. It seems man lives only to fight.

They say that we fight to live, but the fact seems to be just the opposites we live to fight. If there is nothing to fight we simply feel empty, unoccupied, we have nothing to do. And everybody knows the fact that whenever two countries are at war, destroying each other, both countries become very alive. People have more liveliness; their faces are more shining, their eyes seem to be clean and clear as if some dust has fallen, some boredom has disappeared.

We have been trained for thousands of years for war and now a great problem has arisen in the World: because of that training we have come to a state where total war is possible. All other wars were partial — a little bit of destruction used to happen — but now we are capable of destroying the whole earth totally. And not only this earth, we are capable of destroying seven hundred earths of this size and shape.

This state was never conceived before, this is new. Now we have to learn something new to face it. We have to drop praising warlike qualities. Instead of the soldier the sannyasin has to be praised. The soldier moans hate and the sannyasin stands for love.

Unless we create a great movement around the earth of people who love, who enjoy loving, we will not be able to survive more than twenty years. These twenty years are going to be very decisive. It has never been such a decisive time ever, in the whole of history. For the first time we are coming close- to a point where either we will commit a global suicide or we will enter into a new phase of humanity — a new quantum jump.

You can see this happening everywhere. In India, particularly, it is very apparent: if two persons are walking on the street holding hands or two lovers meet on the street and embrace each other or kiss each other, that is enough to enrage the whole Indian mind. It is as if love is something ugly. But if two persons are fighting on the same street, daggers in their hands, ready to kill each other, a crowd of a thousand people will gather to watch. Nobody is there to condemn it. This is

In Indian films kissing is not allowed but murder is allowed! There is no question about murder; it seems that is very cultural and religious. Rape is allowed but not kissing! Love seems to be very dangerous to the old idea of culture, religion and man, because the old idea is rooted in hate. have always been condemned and soldiers have been praised.

All around the earth you will see statues of great soldiers, memorials to the unknown soldier , but have you ever heard of any memorial for the unknown lovers? Or have you seen any statue of two lovers in deep embrace? What kind of idea have we evolved about human beings? Something seems to be ill and pathological. My effort here is to change the whole pattern.