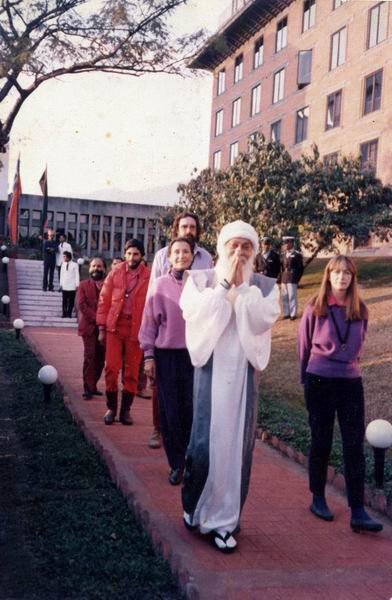 Question – Is it alright to get married and have children?

Osho – Sudharka,
Just meditate over a few of Murphy’s sutras.
First: It is good to be married occasionally.
Second: A clever man tells a woman he understands her, a stupid man tries to prove it.
Third: Marriage is a three-ringed circus: engagement ring, wedding ring and suffer-ring.
Fourth: Marriage may make the world go round, but so does a punch in the nose.
Fifth: Saving a marriage from divorce: the only way is not to show up for the wedding.
Sixth: A woman is God’s second mistake – man is the first obviously – and two wrongs together don’t make a right.
And the last: A woman is entitled to life, liberty, and pursuit of man.

So beware! If you want to get married, who am I to object? I can only make you a little more aware. Think before you jump!

’Baby, which do you prefer?’ whispered Charlie to his girlfriend, ’beautiful men or intelligent men?’
’Neither, darling, you know I love only you!’
The preacher at the wedding was an ardent fisherman who was forced to postpone his fishing trip for a couple of hours to conduct the ceremony.
’Do you promise to love, honour and cherish this woman?’ he asked the bridegroom.
’I do,’ pledged the groom.
’And do you promise likewise?’ he asked the bride.
’I do,’ she said.
’Okay,’ affirmed the preacher as he hastily closed the book and turned to the bride. ’Reel him in!’

A subject of many Athenian jests was the self-control of Socrates in dealing with his shrewish wife, Xanthippe. Once she scolded him loudly and ended by throwing a pail of hot water at him. With philosophic calm he turned to a disciple and said, ’I told you that rain always follows thunder.’

And he was saying that out of his own experience. So, Sudharka, if you want to get married, do it by all means – I will not prevent you. I never prevent people from making mistakes, because that is the only way they learn. It needs tremendous intelligence to learn from other people’s mistakes – it is very rare. Even if you can learn from your own mistakes, that is something very great! People are so foolish that they go on making the same mistake again and again. So do it by all means, just remain a little aware.

A circus train had derailed and the car containing the lions had broken open and ten of the animals had escaped. The sheriff quickly organized a posse to track them down. As the men were getting ready to ride off in several directions, he said, ’Men, it’s a bit chilly tonight so before we go, let us go across the street to the tavern and I’ll stand everybody a few drinks.’
They all gathered at the bar and ordered whisky, except for one man.

’Why aren’t you drinking?’ the sheriff asked. ’Don’t you want to get warmed up before we start out?’
’I want to stay warm all right,’ the man said, ’but I sure don’t want any whisky before I start hunting a bunch of lions because whisky would give me too much courage!’
So just remain a little sober – too much courage can be dangerous!

And you also ask about children… That is going a little too far, because if you get married it is only a question of you and your wife; nobody else is involved in it. But if you start producing children then the whole world is involved in it. THAT I cannot say you should do! And if you are here then the best thing will be to find a sannyasin and get married to a sannyasin. Then children can be avoided very easily, because it is very difficult to persuade any of my sannyasins to have children.

Once a pot of black coffee fell desperately in love with a bottle of milk. After convincing her that he was a really great guy, they finally got married. Some time passed and he began to dream about having children, inventing such names as ’White Nescafe’, ’Cafe Russe’, etcetera. As he told her of his longings, she immediately turned away, saying, ’No… no, darling.’ He didn’t see her point, but as he loved her he decided to wait.

After some time he again tried, but once again she didn’t want to give it any juice. Knowing that he would be cooling down soon, he tried a third time.
’Why not, my love, why not?’ he asked.
’Well, ahem…’ she uttered, ’well… you know… er… I’m a sannyasin, I’m sterilized!’
But I don’t think you will be able to understand all these jokes. If you can understand all these jokes you will not get married at all! But even people who don’t understand jokes have to laugh here, otherwise they look very stupid – very English!

The parents of my personal dentist, Devageet, are here – and they are proper English people. Their only complaint is that they can’t get many of the jokes, but still they laugh just to be polite! After years of working hard and saving, a New York couple finally had accumulated enough money to take a trip to Israel.

They toured the entire country and spent time in the big cities as well. One evening in Tel Aviv they decided to see what the Israeli night life was like. So they went to a night dub. They enjoyed the singer tremendously but, unfortunately for them, the comedian did his entire act in Hebrew. The wife sat patiently in silence throughout the monologue; her husband, however, laughed uproariously at every joke. The woman was, to say the least, surprised.
’So how come you laughed so much?’ she asked when the act was over. ’I didn’t know you knew Hebrew.’
’I don’t,’ said the husband, ’but I trusted him!’

One thought on “Osho – Is it alright to get married and have children?”