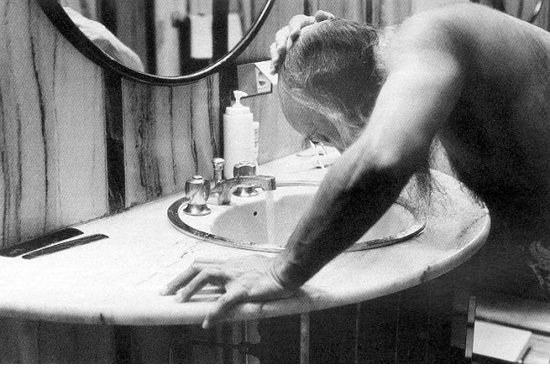 Question – Beloved Osho, You are at once such an incredible strength and sweetness seeping through me. Why do i feel there is a need to protect you?

Osho – It is one of the fundamental laws of life that everything that is higher is very vulnerable. The roots of a tree are very strong, but not the flowers. The flowers are very vulnerable – just a strong breeze and the flower may be destroyed.

The same is true about human consciousness. Hate is very strong, but love is not. Love is just like a flower – easily crushed by any stone, destroyed by any animal. And as you reach higher into consciousness, the ultimate blossoming which we call enlightenment is the most vulnerable thing in the whole of existence.

So you will feel love, you will feel my compassion, and you will feel behind each of my words and gestures, strength. That strength is coming because whatever I am saying and whatever I am, it is my own experience. I am my own authority; I am not within quotation marks. The strength that you feel is the strength of truth. The flower dancing in the wind does not look weak. In the sun, in the rain, it looks immensely strong.

So these two sides which seem contradictory to each other are not contradictory to each other. The strength comes to the flower because it has roots in the earth, its own roots. The strength comes to the flower because the juice that is flowing in it is its own juice. The flower has not borrowed it from anybody, it is authentically itself. And it can dance in the wind, in the rain, in the sun; but on the other hand, because the flower is the highest expression of the tree, it is vulnerable. Even with all its strength, you can destroy it very easily.

Just imagine Socrates speaking to the people of Athens. His strength behind each word is tremendous: a man alone against the whole world. But there is no weakness. He is not afraid. Even the judges are affected by the strength, because anybody who is speaking a borrowed truth cannot have such authority.

To the chief judge Socrates says, ”You can kill me, but remember one thing: your name will be remembered in history for just one thing – that you decided to kill Socrates; otherwise you have nothing to contribute. And all these judges and all these people who are going to decide about me will be forgotten as if they had never existed. You can kill me, but you cannot kill my spirit.”

They decided to kill him, but they were certainly impressed because they could not give any counterargument; and whatever he said was so clear, so truthful, there was no way to put him in the wrong – he remained always in the right in court. Still, it was a democracy – truth was being decided by a majority. And the idiots who made the majority may not have even understood what Socrates was saying; it may have gone above their heads.

Perhaps because of that reason itself, they decided that he should be killed by giving poison, as was the custom in Greece. They could not tolerate such a man, who was so far above them and so much higher than themselves. His beauty, his truth, his sincerity – all were making them feel inferior. He was stronger than the whole crowd that was going to decide his fate.

You can see the strength. The judges were affected by the strength. They had to concede to the majority but they made a few conditions, just to help Socrates. They said, ”If the majority decides to kill you by giving poison, we cannot do anything. But we can suggest a few alternatives – that is within our powers. One is that you can leave Athens and promise that you will not return.”

Socrates says, ”That is impossible, because wherever I am, I will be faced with the same situation.” And Athens in those days was at the peak of culture, education, civilization. Perhaps no city has ever been at such a peak. ”If Athens cannot tolerate me, I don’t think there is another city which is ready to tolerate me.

”If you are throwing me out, who is going to welcome me? And I don’t want to leave Athens – I love it, and I love its youth, and I love the few intelligent people in this city who have been able to understand me. I don’t care about the crowd, I care about those selected people with whom I have a certain heart-to-heart communion. No, I cannot leave Athens. That will be worse than death.” The judges said, ”The second alternative is that you can remain in Athens, but you stop speaking, you stop teaching.”

Socrates, for the first time in the whole trial, laughed. He said, ”You are asking more and more absurd things. What is Socrates without his teaching? What is Socrates without his truth? That’s my life and my being. Please don’t try to be kind to me – death is more respectful than to concede to, and compromise with, anything that goes against my heart.” He accepted death. The alternatives were available.

Certainly there is a strength, a tremendous strength in the man. But just a glass of poison kills the man, because the poison does not take any note of who you are – an idiot or a Socrates. Faced with poison he proves to be very vulnerable. So these two things are not contradictory. You feel my love, you feel my strength – it is there. I can stand against the whole world… in fact that’s what I have been doing my whole life. But those who have hearts will certainly feel my vulnerability. Just a bullet is enough. It won’t see whether it is killing an animal, an idiot, or a buddha.

So the idea to protect me arises in your heart from the second possibility. All my sannyasins feel exactly the same. They feel both – they feel my strength and they feel my vulnerability. And all my sannyasins around the earth are in the same dilemma you are: ”When there is so much strength in the man, what is the need for us to be worried about protecting him?”

The strength is coming from one source, and the danger of destroying such a man is coming from a different source. There is no contradiction in it. And it is natural for the sannyasins to feel immensely protective towards me, for the simple reason that they know the light of a candle is strong enough to fill the whole room with light, but it is so
vulnerable: just a small breeze from the window may put it out. There is no contradiction in it. Both are coming from different sources.