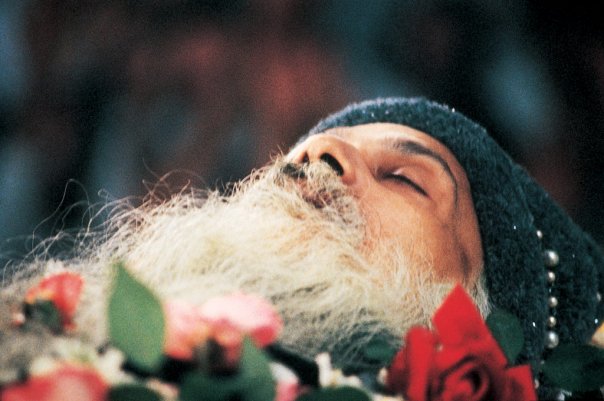 Osho – BAULS say that there is only one way to come out of the stupor man lives in, and that is remembrance of God: NAM-SMARAN, remembrance of His name. That has always been part of the basic techniques on the path of love — to remember Him. And when a devotee, with deep reverence, remembers the name of God, his whole being is thrilled, his energy starts rushing upwards. Ordinarily the energy is rushing downwards; that is the way of sex.

If you really cry the name of God, whatsoever it is — Ram, Allah, or whatsoever, all names are His — the very cry, the very remembrance hits somewhere near the SAHASRAR, the seventh chakra, in the head. If remembrance is not just ritual, if with deep love and reverence and devotion and surrender you have called the name of God, suddenly there comes a change in your body energies. The energy that was going to the sex center starts rising high.

God has reversed
the acts of the play.
The land talks in paradox
and the flowers devour the heads of fruits,
and the gentle vine, roaring,
strangles the tree.
The moon rises in the day,
and the sun at night with shining rays.

The blood is white,
and on the lake of blood
float a pair of swans,
copulating continuously
in a jungle of lust and love.

All the great mystics have described it: when the energies start rushing upwards, when gravitation no longer affects your energy, when your energy is functioning under another Law, the law of grace; when you are pulled up, when you are falling up, when you are rushing upwards as if the sky is pulling you, then man comes to know a totally different world. Everything is upside-down — or maybe it is really rightside-up — but everything changes.
Kabir has said that when it happened to him, he saw the ocean burning, and the fire very cold. He saw fishes running on dry land, and he saw trees whose roots were in the sky and whose branches were coming to the earth. These are just symbolic sayings.

EVERYTHING we had known while sex-energy was running downwards is affected by it. When the sex-energy rushes up, a TOTALLY different world is revealed. Then you don’t see this world because your eyes are no more the same. You are in a new dimension, just diametrically opposite to the old.

But ordinarily our whole concept of life is centered on sex. Whatsoever we do: we earn money, we earn money for sex; we try to earn fame, but we earn fame for sex. Even sometimes very innocent activities which you cannot connect with sex are connected with sex if the person is still infatuated with lust. It is difficult to see how a person who is running after fame is running after sex.

Ask the psychologists. They say women are more attracted by fame than by anything else. They are not so attracted by the face, handsomeness, as they are attracted by achievement. An achiever, one who has much money, power, prestige, is more attractive to women than anybody else,. because a woman is constantly in search of somebody to lean upon. You may be beautiful, but if you have no power you cannot give any guarantee and security to the woman. If you are powerful, maybe you are not beautiful, you are not intelligent, but that doesn’t matter. But it you are powerful, reliable, the woman can lean on your shoulders. There is a certain guarantee in you.

Isador Ginsberg was instructed by his physician to take a holiday after years of hard work building up his clothing business. On his holiday he met a young blonde who spent much time with him. Returning to his office, he felt and looked like a new person; love had entered his life.

“Well, Mr. Ginsberg, what do you think of these?” And he lays out on the desk a number of photographs of Isador and Mamie in decidedly compromising positions.
Isador was absolutely flabbergasted. He stared wide-eyed at each of the pictures in turn. Many minutes of silence gripped the air. Finally he turned to the lawyer and said with a firm order in his voice, “Well, I will take two of this, three of that one, and four copies of each of the other pictures.”

But it has to be so if you have not been working hard to go beyond it, to go beyond its grip. If you have not been struggling hard to release yourself from its clutches, then it is going to be so — because at the moment of death you start thinking more of sex, because sex seems to be just the opposite of death. Sex is birth; mind fantasizes about sex. And when the last moment has come when the body is going to disappear, a bout of energy, the last bout, streams into your head, overpowers you. If you die with sex on the mind, you will be moving again into the wheel of life, what the Hindus call ANAGAMIN, coming and going, coming and going; a repetitious circle.