Skip to content
Christianity and Christ Osho on Religion Dogmas

Osho – Jesus committed the crime of being happy. That was his only crime 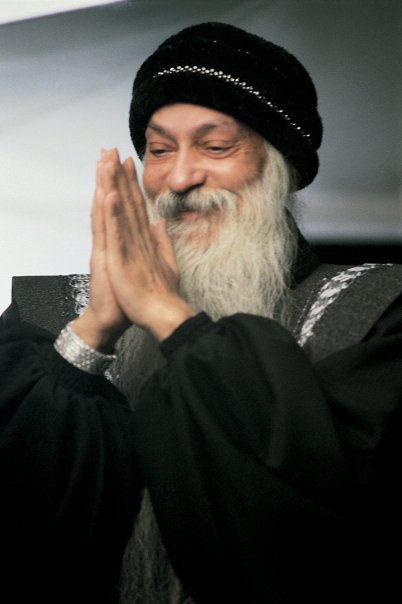 Life expands, death is a shrinkage. When you are young, you are flowing in all directions. When you are old, you are frozen. You no longer flow. You only grumble: you become hard, the flexibility is lost. When religion is young, alive, it is ordinary. It has nothing in it to fulfill the ego — it is very ordinary. In fact, in its very ordinariness, it is extraordinary. It is superb in being just ordinary. Life is enough when religion is young; no other God is needed. Then life is God, life is divine.

When religion becomes old and ill…. Everything becomes old and ill, whatsoever is born has to die. Even a religion is born one day, lives for a while and then dies. But followers go on clinging to the dead body. Then the dead body kills the followers also: it becomes a source of illness, neurosis: it becomes an abnormality, a cancerous growth. When religion becomes ill or dead, it kills you; it is poisonous. This has to be understood from many directions.

Only sinners seem to be happy, saints seem to be very sad. So whenever you are sad, everything is okay. You never feel guilty if you are sad — have you observed it? But if you are very happy, suddenly you try to hide it; nobody should know it. Why has this happened to the human mind? Every child is taught to be serious, somber, to be long faced. Every child is taught not to jump, not to run, not to shriek, not to be too delighted, not to laugh loudly. “Sit quietly” — as if there is something wrong in energy expressing itself. Whenever the child is happy the family, the people around, all start teaching him, as if something has gone wrong. And when the child is not happy, when he is unhappy, everybody sympathizes with him.

When the child is ill, everybody takes care of him; when he is healthy, everybody goes on stopping him: “Don’t do this, don’t do that.” When the child is Lying on the bed ill, the father comes, the mother comes, the relatives come. They are all very careful about him. By and by he starts learning that there is something basically wrong in energy, in happiness, in joy. In dancing, running around, shrieking with delight, there is something basically wrong. He gets the hint.

And there is something basically good in being sad, ill. Whenever he is sad, he is appreciated, sympathized with. Whenever he is healthy, everybody seems to be against him; the whole world is against him. This creates a guilt, a deep guilt in the child, and that guilt follows him his whole life.

Because of this training…. And the training has a vicious circle about it: you were trained by your parents, your parents were trained by their parents. Somewhere in the past, hidden deeply in unknown history, something went wrong. It may be that one who is happy cannot be forced to work because happiness is a play. Only sad people can be forced to work. That’s why, when you work, you become sad; when you are on duty, you become sad. A holiday has a different quality to it. You can laugh, you can enjoy.

Mulla Nasruddin has not worked for a long time, for years. One day he was sitting by my side. The day was very sunny and he said, “If I had been working somewhere, I would have taken a holiday today.” And he has not been working for many days, for years! He is missing work because he cannot take a holiday. From where to take a holiday? He remembers the working only when it comes to taking a holiday.

The whole human mind has been trained for work. That’s why duty has been praised, playfulness condemned; business praised, gambling condemned. A gambler is playful; a businessman is serious. The businessman is respected; a gambler, simply condemned. He is thought to be below humanity.

Religion is a totally different dimension. There is every possibility that a gambler may enter in it, but a businessman is debarred. A drunkard may enter into religion. I am not saying that you should become drunkards; I am just emphasizing the quality of playfulness, the quality that can enjoy and be, and is not worried about results. But a very serious man is debarred by his own seriousness.

Jesus created trouble for himself. He was a religious man — healthy, young, vibrant with life. Life was his God. In the gospels, many times you come across scenes that depict him as sitting at the dining table — eating, drinking. How could the Jews and the people, his people, believe that he was religious? Fasting should be done and he was always feasting, he was always creating a feast around him. Wherever he moved he created happiness. What type of religious man was he?

Jesus was crucified outside the town. Not only that: to emphasize the fact, two very dangerous criminals were crucified with him. On either side: two dangerous criminals. Right between these two he was crucified, just to emphasize the fact, to hit it hard in people’s minds, that he was just a criminal, a dangerous man — not at all respectable, an outcast. He had to be cut down like a worm, not like a man. What had he done? What sin had he committed? The sin of being happy.

Jesus committed the crime of being happy. That was his only crime, nothing else. Christians have been trying to change his face. They say he never laughed. Can you imagine a man who is always seen at dining tables, eating well, drinking — and not laughing? Impossible! But Christians have to create a respectable Christ, a Jesus who is not a criminal. They have painted his face. You can’t find any picture of Jesus depicted by Christians, any statue of Jesus created by Christians, which is real or true. It is absolutely unreal. The man has been betrayed.

Just the other night I was reading a poem. I liked it. I would like you to listen to it. It is a poem by Adrian Mitchell.

The Liberated Christ Gives An Interview

I would have walked on the water
But I wasn’t fully insured.
And the B.M.A. sent a writ my way
With the very first leper I cured.

I would’ve preached a golden sermon
But I didn’t like the look of the mount.
And I would’ve fed fifty thousand
But the press wasn’t there to count.

And the businessmen in the temple
Had a team of coppers on the door
And if I’d spent a year in the desert
I would’ve lost my pension for sure.

I would’ve turned the water into wine
But they weren’t giving licenses.
And I would have died and been crucified
But like — you know how it is.

I am going to shave off my beard and cut my hair
Buy myself some bullet-proof underwear
I am the liberated Christ
And I have got no blood to spare.

Christians have made him totally different. He was not like that. He was a rebellious man, an extraordinary revolutionary. And he lived it, he lived his rebellion. He was not a theoretician: he lived it, he died for it. He loved life so much that he was ready to die for it. But he was not ready to be anti-life. That was his crime. Even with John the Baptist and his disciples there was trouble. John the Baptist was an old, traditional prophet. His disciples were ascetics: fasting, praying. They were anti-life. There was conflict between Jesus and the disciples of John the Baptist. These sutras are about that conflict.