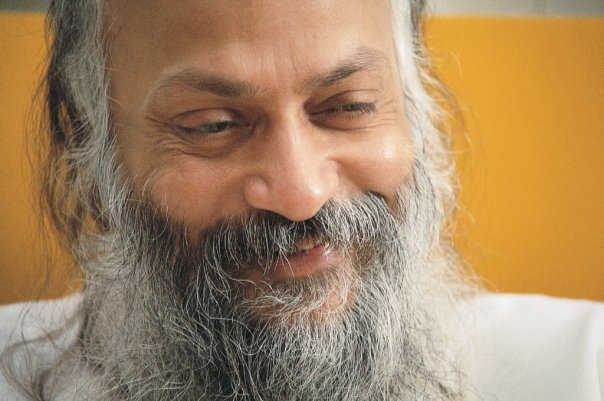 Osho – Now it is time for Sardar Gurudayal Singh.
He seems to be sitting very far away. Just put the light on! Everybody has to see his rainbow-colored turban!

1..
One morning, Mad Melvin, Loony Larry, and Crazy Karl all escape from the Sunnyvale Insane Asylum.
Happy as larks, the three loonies go into town and come upon the construction site of a huge skyscraper. They look around curiously, when suddenly a man in a hard-hat walks up to them.
“Hey, you guys,” shouts Klopski, the job foreman. “Get back to work and finish digging that trench!”

The three loonies all smile and nod in unison, then run around and start working on the trench. A couple of hours later, Klopski comes back to see how they are doing. He is shocked to find Mad Melvin digging furiously, while the other two loonies are standing motionless, holding their shovels in the air.
“What the hell are you doing?” screams Klopski at Loony Larry and Crazy Karl.
“We are street-lights,” replies Loony Larry.
“You must be nuts! You are fired!” shouts Klopski, sending the two loonies away.
But Mad Melvin stops working immediately.
“No,” says Klopski. “Not you, you are working well, just continue your digging.”
“What?” cries Mad Melvin. “In the dark?”

2.
The Medical Corporation of America decides that there is only one way to cure AIDS, and that is with money — lots of money. So they arrange with all three TV networks in America to have a giant AIDS-Telethon, to take place on Saturday night.
The idea is that Rock Hunk, the famous movie star, will make love to five hundred women on TV, while the American public phones in its pledges.
On the big night, Rock Hunk gets up to four hundred and seventy-five women and the money is pouring in. Rockefeller Foundation phones in and donates millions, NASA phones in and donates the funds for the space program. Even Ronald Reagan phones in and donates Nancy’s dress fund. Money is pouring in, and it looks like AIDS is going to be cured for sure.
But when Rock gets to four hundred and ninety-five, he passes out. They throw buckets of iced water on him and he staggers to his feet and wobbles over to the next woman. At four hundred and ninety-eight, it looks like he is really finished, but the woman somehow manages to arouse him, and the money keeps pouring in.
But at four hundred and ninety-nine, Rock passes out, and no one is able to wake him up.
The whole country is furious and everyone phones in and takes back their pledges.
Eventually, George Bush, the host of the show, manages to revive Rock and drag him into the office.
“We almost cured AIDS!” cries Bush. “What the hell happened?”
“I just don’t understand it!” replies Rock. “Everything went fine this morning at the rehearsal!”

3.
Nancy Reagan is walking into the White House dining room to have lunch with Ronald and discuss their retirement plans. Suddenly Alvin Mindbender, a close family friend, races past Nancy in a sweat and disappears down the hall.
Nancy goes on into the dining room, sits down over a big lunch, and starts chatting to Ronnie.
Meanwhile, in the Oval Office, Alvin Mindbender is frantically phoning all over the country to find Vice President Bush, who is finishing up his presidential campaign tour.
Two hours later, in Santa Fe, New Mexico, Alvin at last gets Bush on the line.
“George, thank God!” cries Alvin. “I’ve been trying to reach you for two hours! There has been a terrible tragedy at the White House…!”
Meanwhile, back in the White House dining room, Nancy has just finished her banana split dessert. “Now, Ronald,” she says, wiping her mouth. “I insist we take down those purple and green striped curtains in your bedroom at the ranch-house….”
Suddenly, Alvin, still sweating buckets, bursts into the room. Seeing Nancy chatting to Ronald, he stops dead in his tracks, and his jaw drops open.
“Holy shit, Nancy!” screams Mindbender. “What the hell are you doing? Ronald died two hours ago!”
Nancy, takes a close look at the senile old president. “My goodness,” she says, “how can you tell?”

One thought on “Osho Jokes”