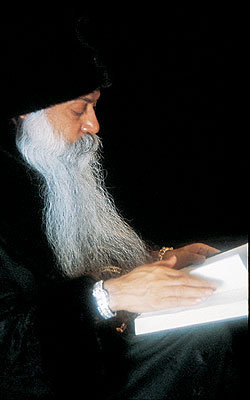 Osho – Sameer, I am reminded by your question of an anecdote. H.G. Wells had completed his great work on the history of the world …. And he has made tremendously important statements in his rare book. For example, he has said about Gautam Buddha that ”He was the most godless, yet the most godly man that has ever walked on the earth.”

His book was the talk of all the intellectuals around the world, and one intellectual journalist interviewed him about the book. His first question was, ”What do you think about civilization?” And the answer that H.G. Wells gave is of such depth that it has not to be forgotten; it is still fresh and new. He said, ”The idea of civilization is good, but somebody must do something about it, because it is still an idea. Civilization has not happened. Researching for my book on world history, I have come to know that man is still uncivilized.”

And one of the reasons man is still uncivilized is the division between mind, body, and soul. This division has been preached by all the religions of the world. They have condemned the body; a few of them have condemned the mind, too. And they have all praised the soul. The result has not been as they expected. The result has been a very strange poisoning of humanity. People have not dropped their bodies, they have not dropped their minds, but they have become guilty about them.

In the East, the body has been so much condemned that the ultimate result is poverty – no science, no technology, a poor, hungry body; starved, condemned, neglected. And in the West, the result has been a healthy body, an evolved technology, richer literature, art, all for the nourishment of the mind, but a poor soul, almost nonexistential. This is a strange tragedy. The West is suffering from a poor soul, and the East is suffering from a poor body and a poor mind.

My suggestion to you, Sameer, is that the work for the future humanity, for a new man, is to drop the old conditioning – of the East, and of the West. Drop all antagonism, either of the spiritualist or of the materialist. Accept the realistic approach that existence is both – matter on the outside and spirit on the inside. And in between the two is the bridge of the mind.

In a miniature form, the same is true about every human being. The new man will come out of this unity. It feels … if somebody says that Gautam Buddha is only half, it hurts. But truth is truth. Mahavira is half – just a soul, anti-life. So is Zorba – against spirituality. So are all the scientists – even the greatest, like Albert Einstein – who cannot conceive the possibility that there is an interior existence of consciousness. Albert Einstein is half; that is the tragedy of the West. Buddha is half; that is our tragedy. And the work for the future is to bring them together.

I have been using one expression, and that is ”Zorba the Buddha.” The body has to be enjoyed as much as your soul. Matter has its own beauty, its own power, just as consciousness has its own world, its own silence, its own peace, its own ecstasy. And between the two is the area of the mind – something of matter and something of the spirit. The poet is just in the middle, between the materialist and the spiritualist; his poetry touches both extremes. I would like all three points – the two extremes and the middle – to become one unity.

A man who rejoices in his body and the wisdom of the body, a man who uses his mind as a tremendously significant mechanism that evolution has brought, and a man who does not stop at mind but goes on searching beyond, into the realms of divineness, into the realms of godliness – to produce this man should be the effort of all those who are in some way concerned with educating the new generation. The educationists, the journalists, the spiritual teachers – all people who are involved in some way in creating a better human being than has been possible in the past – have to accept the totality of man without rejecting anything.

Journalists can do a tremendous service to humanity if their minds are clear, if they are not themselves prejudiced, either in favor of spiritualism or in favor of materialism. A journalist has to be of an open mind, receptive to all kinds of possibilities. He has to be a seeker and a searcher and an agnostic; he has not to be a believer. The moment you believe in something, you start enforcing your belief, whether it is right or wrong. The journalist has to be open to all dimensions, ready to accept anything that is going to beautify existence and make man more blissful, more healthy, more intelligent, more aware of the tremendous mystery that surrounds us.

To me, that is the only prayer: to become aware of the miraculous, the mysterious that surrounds us. And only a man who has come to a unity within himself is capable of understanding the mystery of existence.