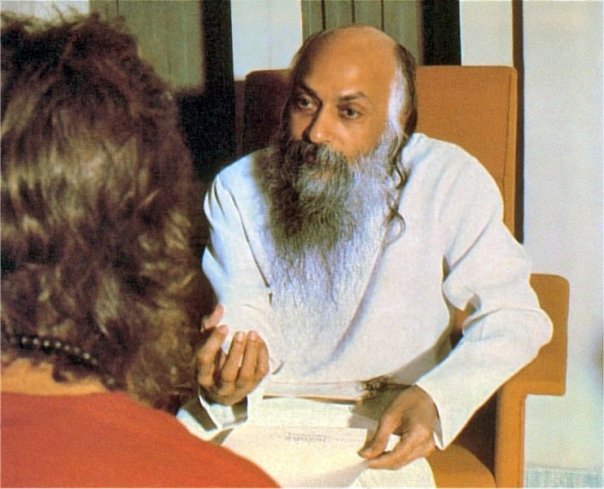 Question – Osho what to do with the feeling of helplessness at the frustration in finding that nothing is ultimately satisfying — all is not enough?

In that very experiencing, in that very understanding, you will be relaxed. Why ask that anything should be ultimately satisfying? Why not be satisfied with whatsoever life gives you? — even if it is only for the moment. Why be greedy? Alla, you seem to be very greedy. You seem to be of that old, rotten type of spiritual person — greedy. He wants everything for ever, for ever. If he falls in love with a woman, he wants her to remain of the same age for ever, for ever. He himself will be growing old — that is another thing. But the woman has to remain young.

It is these greedy people who have created the ideas of paradise, FIRDAUS. In their paradise, women never grow old. All women in paradise are stuck at the age of sixteen. Must be getting tired… for millions and millions of years stuck at sixteen. But it says nothing about the men — it may be because the scriptures are written by men. If women were writing scriptures then they would write something else: men will be stuck somewhere at eighteen.

And the same people who go on condemning all kinds of things here go on promising the same things a thousandfold, for eternity, in paradise. What kind of logic is this? Alcohol is prohibited here by the Mohammedans, but in their firdaus, in their paradise, rivers of alcohol flow — rivers! You need not go to a pub; you need not only drink, you can swim, you can dive.

These same religious people who go on condemning the feminine body — all the religions have committed that crime — that shows simply only one thing, that the people who were writing those scriptures were deeply sexually repressed people. It shows nothing else. It says nothing about the women, it simply shows something about the scripture writers, that they were deeply repressed people — they were afraid of women.

But here they are afraid, and here they go on telling everybody: “Beware! Woman is the door to hell!” And the same people provide you with beautiful women in heaven — the most beautiful. Do you know? — in paradise women don’t perspire, they don’t need deodorants. Their bodies have a perfume of flowers — a natural perfume, not created by some artificially manufactured perfume.

Just naturally like flowers — roses. Their bodies are made of gold. What greed! And what are you going to do with a woman whose body is made of gold? You will be stuck! But the greed, the greedy mind fantasizing.

All these scriptures are pornographic. This is real spiritual pornography: women with bodies of gold, studded with diamonds, no perspiration, natural perfume, and always young, and all beautiful.

One great saint died, and by coincidence his great disciple also died after a few hours. The great disciple was very much excited about seeing his master again. And he was thinking on the way — it is a long journey from the earth to paradise — he was thinking, “My master must have been received by angels playing on their harps and beautiful women dancing, and he must have been given the most beautiful women because he was such a great saint, such an ascetic. When he was on the earth he had never touched any woman. What to say about touching? He had never allowed any woman to enter into his house. He had never seen any woman face to face; if he had to talk to a woman he would always look downwards or would keep his eyes closed.What great austerities he went through! Now he must be being rewarded.”

And he reached and he saw his master — and, really, he was rewarded. He was sitting under a tree, a beautiful tree, a golden tree; leaves of emerald and flowers of diamonds — and Marilyn Monroe, utterly naked! hugging him. The disciple fell at the feet of the master and said, “My great master, I was waiting for this. This was due! You have been rewarded well.”

And the master said, “You stupid fool! Keep your big mouth shut — you have not grown at all. You don’t understand anything. She is not my reward — I am her punishment!”

But these greedy people…. Deva Alla, if you know from your own experience that all is frustrating ultimately, everything only brings joy for the moment, then why not be happy with the moment? Why ask that it should be there for ever?

I teach you the joy of the moment. Live in the moment, and whatsoever the moment makes available, enjoy it, celebrate it. While it lasts, dance! And when it has gone, be grateful that it had come. Why ask that… NOTHING IS ULTIMATELY SATISFYING — ALL IS NOT ENOUGH? Nothing can be done about it! This is so. This is how the reality is, and the reality is not going to change its ultimate law for you. Nobody can be all exception.

But if this experience has not yet become your own, then you will have to suffer a little more. You will have to hope a little more. When understanding arises, hope disappears. That does not mean that one becomes hopeless: that simply means that one accepts the life as it is, and whatsoever it gives one accepts with gratitude and has no complaint.

In order to get a job with the railroad, Angelo had to pass a test. “Suppose two trains were heading for each other at a hundred miles per hour on the same track,” asked the personnel manager, “what would you do?”
“I take-a the red flag and wave-a them to e-stop,” Angelo answered.
“But you don’t have a red flag,” pointed out the man.
“Then I am-a take-a the switch iron and change-a the tracks.” “You don’t have a switch iron either.”
“Well, in that case,” decided the Italian, “I’m gonna call up-a my wife, Maria.”
“What has your wife got to do with two trains coming at each other at a hundred miles an hour?” exclaimed the man in charge of hiring.
“I tell-a her to come down ‘cos she has-a gone see the biggest-a mess-a in the whole world!”

YOU can do whatsoever you can do, and when nothing can be done it is better to call the wife and see — and enjoy it! Learn to enjoy not only the pleasures of life but the pains too, not only the ecstasies but the agonies too. And the person who can enjoy the agonies is liberated.