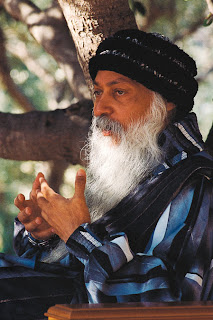 Beloved Dharm Jyoti,
Love. Don’t ever repress the mind.
Repression is a disease.
And that which is repressed will never be completed.
It comes back again and again to attack you.
The mind is to be understood.
Finally, only understanding the mind becomes the solution.
Repression is merely postponement of diseases.
The path is neither in indulgence nor repression.
The path is in understanding.
Hence know your own mind in all its forms.
Live consciously.
Live wakefully.
Then what is meaningless disappears on its own.
And its energy is transformed into the meaningful.
Otherwise we create a vicious circle for ourselves.
A so-called saint was sitting alone before his dhuni,
his holy fire pit. Someone came by to test him, saying,
”Babaji, is there any fire in the dhuni?”
The saint said, ”There is none.”
He said, ”Please stir it, perhaps there are coals.”
Raising his eyebrows the saint said angrily,
”I told you there is no fire.”
The man provoked him again, saying,
”Babaji, surely there must be a few sparks?”
Leaning forward on his fire tongs the saint said,
”What kind of idiot are you anyway?”
Then the man said, ”Babaji, I see a few sparks.”
The saint said, ”What? Am I blind?”
The man said, ”A few flames become visible now!”
Then the saint completely lost his senses –
his eyes filled with sparks and his voice with flames.
Picking up his fire tongs he started chasing after that man to beat him.
Fleeing for his life the man said,
”Babaji, look, now the fire has taken flame totally!”
Only a repressed fire can burst into flames.
And a repressed fire can burst into flames at any moment.
Repression is self-enmity and a self-deception.
In the middle, between indulgence and repression is the door to peace, to liberation, to strength, to truth, to samadhi.
Search for this door.