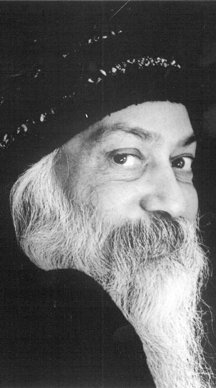 Osho – No, because education is something very ordinary. Religio will remain religio. It cannot be replaced by another word, for the simple reason that it has multidimensional meanings which no other word can have.

The first meaning of religio is: to make you one. All the societies and cultures and religions have made you schizophrenic, split. They have divided you in many parts — the good part, the bad part, the light part, the dark part, the higher and the lower. They have been teaching humanity for centuries that you are not acceptable as you are; you have to drop many of your essential parts. Then only will you be acceptable; otherwise you will remain a sinner. To become a saint, you have to go on destroying many parts of your being, your nature.

Just look at a painter. He uses all the colors; he uses black, he uses white too. He uses all the colors to create something immensely beautiful; everything just has to be in the right place. Go to any school and you will see a blackboard, because to write with white chalk, a blackboard is needed. It gives the white letters more whiteness, it creates the contrast. The same words can be written on a white board and they will be lost, you will not be able to see them.

Man comes with all the ingredients to become an enlightened person, but very few people manage to become — for the simple reason that you start fighting with yourself, rather than trying to understand all your ingredients and finding ways they can be used to create a beautiful symphony.

Freedom freaks them out! Freedom creates fear in them. Freedom means responsibility. In slavery you are not responsible; you have just to follow the order, just to do what the priest says. You have not to find your own truth, you have to just become parrots and repeat THE HOLY BIBLE, the holy KORAN, the holy GITA. You don’t have to journey inwards; you have to become only more informed, more learned, more accustomed to the rituals — howsoever meaningless.

Anybody who wants to become enlightened will have many doubts about all these rituals, about all these scriptures, about all that is being taught in the churches and synagogues by the bishops, by the rabbis, by the shankaracharyas. There are bound to be a thousand and one doubts.

Religio is individual, religion is organized. And the most challenging thing in the world is to be individual. But the greater the challenge, the more is the gain, the more you become steel, the more of your potential becomes actual.

And the state has been always in conspiracy with organized religions. They support each other, their aim is the same. The state, the politicians want people to be enslaved physically, and the priest wants people to be enslaved spiritually. And enlightenment is freedom, freedom in all its dimensions.

So please, don’t bother looking for another word, there is no need. Religio has all the meanings that are needed. Religio has no scripture, no doctrine except a challenge: “You are alive — seek the source of your life.”