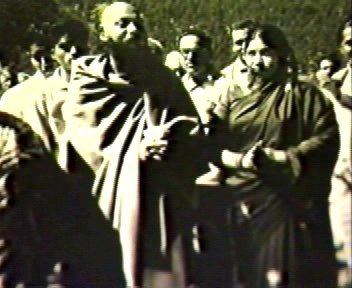 Man is a transitory period. Man is not a being but a becoming — on the way. The past is left behind and the future is not attained yet. Hence the agony, the anguish: man is torn apart. The past pulls him back. To be an animal again seems to be pleasant, and it is, because it has not the agony of man and the anguish and the anxiety of man.

If you watch the animals you will feel jealous. Walt Whitman has written it exactly in his diaries that: “Whenever I see animals, I feel jealous. We have missed something.” We have not missed really, but the peace, the calm, the collectedness of the animal is lost. The animal is happy because he is unaware — unaware of death, unaware of the problems of life. The animal is happy because there is no consciousness. Consciousness first brings pain, because suddenly you become aware of a thousand and one problems facing you. You have to encounter them, you have to solve them or dissolve them. All peace disappears.

But human consciousness is still worthwhile. And I don’t agree with Walt Whitman, I agree with Socrates who say.: “I would like to be a discontented Socrates rather than a contented pig.” The statement of Socrates is of immense value. It has to be understood by every seeker, because the goal is ahead; there is no going back. The pig may look contented — because he is not aware, not really because he is contented. But to know discontent one needs consciousness.

There is something ahead; something more has to happen. Something HAS happened, but only partially. Look back and you find the pig contented; look ahead, and you see Buddhas contented. You can become a Buddha! A Buddha means one who is conscious and contented. The pig is one who is unconscious and contented. And the man is just between the two: a little bit conscious, just a little bit. Conscious enough to be aware of the pain of life and the misery and the suffering, but not conscious enough to be aware of the ecstasies that life makes available.

Just a little consciousness is enough to be aware of pain. But much more awareness is needed, much more consciousness is needed, to be aware of the deeper realms of your inner kingdom. Man is in a kind of drunkenness: awake and yet not awake. Man sees a little bit, and yet everything seems to be dark, just shadows moving in the dark are felt. But nothing is absolutely clear; there is no clarity, no transparency, no light.

This is the state of man. And we cannot go back because there is no possibility of going back. Man tries hard to go back — through sex, through food, through alcohol, through drugs — man tries somehow to drown this little bit of consciousness that has arisen in him. But it comes back again and again, because whatsoever has been Learnt has been learnt for ever — it cannot be unlearnt.

It has happened in your being. Now there is no way to discard it. You have to live with it. The only possibility is to move ahead, to grow more into awareness: if it has brought pain, then go deep into pain, but become more and more aware. Use pain as an object of awareness, as an object of meditation.

You are sad — be aware. Let sadness become your meditation. You are angry — be aware. You are in love — be aware. Use all possibilities, all opportunities to be more and more aware. Slowly slowly, the momentum gathers, and one day something explodes in you. That explosion is known in the East as the flowering of the one-thousand-petalled lotus — Kabir will talk about this lotus in these sutras. And Kabir is talking about you; first a few metaphors have to be understood.

The swan is one of the metaphors most used by the Eastern mystics. The swan lives beyond the Himalayas, his home is beyond the Himalayas, in the Lake Mansarovar. The Lake Mansarovar is the purest lake in the world — very rarely does a human being reach there — uncontaminated, unpolluted, surrounded by the Himalayan beauty, virgin peaks. The swan is born there, lives there, but when it becomes TOO cold the swan has to come to this side of the Himalayas, to the plains. And sometimes it happens: a swan forgets the way to go back. And sometimes it happens: a swan simply forgets that he has a home somewhere, starts living by the side of dirty rivers, dirty ponds, muddy places.

Hence, the swan became a tremendously potent metaphor for man. Man comes from God but has forgotten from where he comes, who he is. Man comes from God, from the holiest of the holies, and goes on living by the side of dirty rivers, muddy pools of water. Of course, he cannot be contented here, but he knows no other place to go. He is lost. This world seems to be the only world.

One thought on “Osho – Man is awake and yet not Awake. His wakefulness is very thin”