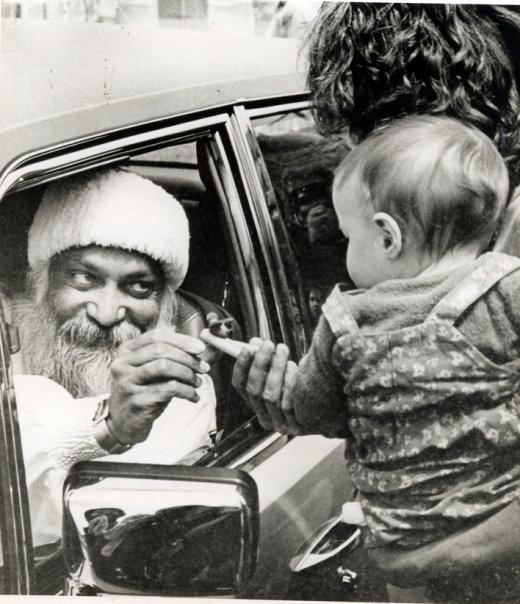 [The woman says: I feel that I’m pregnant since we’ve been here. Is there any meditation or thing to do that will be helpful for the baby or for us?]

Osho : Just remain as happy and loving as possible. Avoid negativities – that’s what destroys the mind of the child. When the child is in formation he not only follows your body, he follows your mind too, because those are the blueprints. So if you are negative, that negativity starts entering in the build-up of the child from the very beginning. It becomes almost built-in, and then it is a long, arduous journey to drop it. If mothers were a little more careful, no primal scream would be needed. If mothers were a little more careful, psychoanalysis as a profession would disappear.

Psychoanalysis is doing great business because of mothers, because according to psychoanalysis man’s only problem is the mother. If all the schools of psychoanalysis could be reduced to one single problem, it would be the mother. The mother is really of great significance because for nine months the child will live in the climate of the mother; he will imbibe her mind, her whole mind.

So don’t be negative. Be more and more in the yes mood – even sometimes when it looks hard. But that much sacrifice has to be made for the child. If you really want to have a child of some value, of some integrity, of some individuality, and a happy child, then that sacrifice has to be made. That is part of being a mother – that sacrifice. So don’t be negative at all; avoid all negativities.

Avoid anger, avoid jealousy, avoid possessiveness, nagging, fighting, avoid these spaces. These you cannot afford – you are creating a new being! The work is of such importance that one cannot be silly and stupid. Rejoice more and more, pray, dance, sing, listen to great music – not pop music. Listen to classical music, which is soothing and goes very deep into the unconscious, because the child can hear it only from there.

Sit silently as much as you can, enjoy nature. Be with trees, birds, animals, because they are really innocent. They are still part of the garden of Eden – only Adam and Eve have been thrown out. Even the tree of knowledge is still in the garden of Eden; only Adam has been thrown out. So be with nature more, and relax so that the child grows in a relaxed womb, non-tense; otherwise from the very beginning the child starts becoming neurotic.

(to the man): And help her in these days so that she can be more positive. Don’t provoke her into negativity. Give her more and more time so that she can sit silently, be with the trees, listen to the birds, the music. Avoid any situation in which you think it can become a provocation for her to become negative. Be more loving, rejoice in each other’s silence more, because you are both giving birth to something which is divine.

Each child is divine, and when something great is going to happen, a great guest is going to come to your home, you don’t fight. And this may be the greatest guest that will ever come to you, so for these nine months be careful, cautious, watchful. Be more loving and less sexual. If sex happens out of being loving, it’s okay – but not for sex’s sake itself. From the very beginning that gives the child a deep-rooted sexuality.

If for these nine months you can avoid sex as sex, that will be a great gift to the child. Then his life will not be so obsessed with sex as people’s lives are. Either they become too indulgent – which is obsession – or they become too repressive, too holy, too saintly; that too is obsession.

In the world only these two types of people exist, and both are ill, both are pathological; the sinner and the saint are both pathological. A totally different kind, a third kind of human being, is needed. And that third kind of being will have this quality: no obsession with sex this way or that – neither against nor for; he will be exactly in the middle. Out of love sometimes he will move into sex, but then sex has a spiritual quality.

It is not for sex itself. Because there will be no obsession with sex indulgence he will never become repressive. And because sex will have a spiritual quality it will give him glimpses of samadhi and he will start moving upwards, very slowly, very gradually, with no fuss about it. Otherwise spirituality makes so much fuss.

A real spiritual person will not make much fuss; there is no need. He simply enjoys it, so he is not renouncing, he is not doing something great. He does not expect the whole world to give him attention and come and pay homage saying, ”You are a great man because you have renounced this and you have renounced that.” He does not renounce anything at all. He enjoys everything and because of his total enjoyment his energy starts becoming more and more delightful, and finally more and more lightful. So just these hints – you have to work them out. Good!

One thought on “Osho Meditation advise for Pregnant Women, Meditation during Pregnancy”