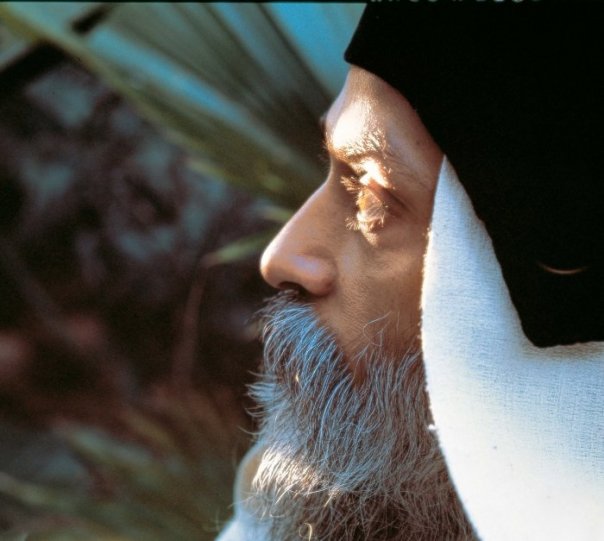 Osho – Ma Dhyan Agni. Dhyan means meditation, Agni means fire. Meditation is a fire. It does two things: it burns your past totally, it consumes your mind absolutely without even leaving a trace behind it, and your past contains everything — your religion, your politics, your nationality, your race, and all that. It contains all that is wrong. It is just junk which we have been loaded by others.

The fire of meditation consumes it totally and the moment it has consumed all that is not part of you but has been forced upon you, which is just a conditioning but not your being, the moment it is destroyed your being for the first time rises above because it is no more burdened, no more crushed under the weight of the past — and the weight of the past is big, it is mountainous and your being is just like a rose flower, very delicate.

The moment rocks are removed the rose starts growing; hence the fire of meditation does two work. One; it is a death and second, it is a resurrection, a new beginning, a rebirth. Jesus says to Nicodemus ‘Unless you are born again you shall not enter into my kingdom of god.’ That’s what exactly meditation does; it destroys you as you are and it resurrects you as you should be.

Swami Dhyan Dheeren. Dhyan means meditation, Dheeren means the patient one. Meditation needs infinite patience. One cannot grow into meditation in a hurry. It can never be like instant coffee. It is not a seasonal flower. It is like the star touching big Cedars of Lebanon: it takes hundreds of years for those trees to rise above into the sky. And they live for thousands of years.

Meditation is going to give you the whole eternity; hence it cannot be achieved in a hurry; One has to be really patient. And this is one of the qualities modern humanity has completely lost track of, it is one of the contributions of the western mind to the whole world; this hurry, this constant rush. There is a basic reason for it. The Judaic religion and it offshoots — Christianity and Islam — these three religions are the root cause of it, because they have been talking about only one life. If this is the only life than naturally one is in a rush.

Just seventy years, if you are fortunate, and if you calculate you will find that that is not much; one-third of it will be lost in sleep. Much of it will be lost in the schools, colleges, university, reading all kinds of stupid things — geography, history, geology, zoology and what not! Much of it will be lost in earning bread and butter, much of it will, will be lost by going to the factory or the office from the home and coming back — almost there are people who are travelling two, three hours every day from the office to the home. The remaining little bit will be lost in seeing that idiot box, TV or going to a movie or shaving your beard every day or twice a day, taking bath and eating food and all kinds of things — if you simply go on calculating it will be a miracle if you can save seven minutes out of seventy years life. Than it is too short: seven minutes between birth and death and all is finished and finished forever! It is bound to create panic — and that” what has happened in the West.

And the disease has become now contagious, all over the world. It has never been so in the East because we had a vast canvas, there was no hurry. Thousands of life — actually India has been talking about eight-hundred-forty-million lives. That created its own trouble; it created lethargy, lousiness. You cannot rely on anybody. He will say ‘I will come five o’clock’ and he may not turn for seven days and still he will not feel guilty or ashamed. he will say ‘What is there? If not that Sunday this Sunday I have come, if not five, then six, then seven — it doesn’t matter much.’ All trains are running late…

Everything is lousy, everything is lazy — that is a bad implication of it — but one thing was great in it, that nobody was in a hurry. That helped immensely meditation. It is not an accident that meditation grew in the East. It is inevitable that it could have only grown in the East where people are ready to wait. There is no expectation in waiting; they simply enjoy waiting.

I know that both the attitudes have their good points and bad points. The West has been able to bring things in order, it has been able to discipline things. Trains are in time, people are efficient, nobody is lazy or lousy-that’s good about it — but then it creates a certain tension inside.

The whole life you are running so when somebody says that meditation is just sitting silently, doing nothing, the spring comes and the grass grows by itself, you listen it but you cannot understand it — how the grass can grow by itself if you don’t pull it up? And just sitting silently? I used to have this darshan in my lawn, I had to change, because people were continuously pulling the grass — they were destroying the lawn! They were simply trying to help the grass… nothing. How the grass is going to grow by itself? They were in a hurry.

Nobody exactly knows why you are running and nobody has time to ask you either. Everybody is saying ‘See you soon,’ (can’t get it??) they are on the way.