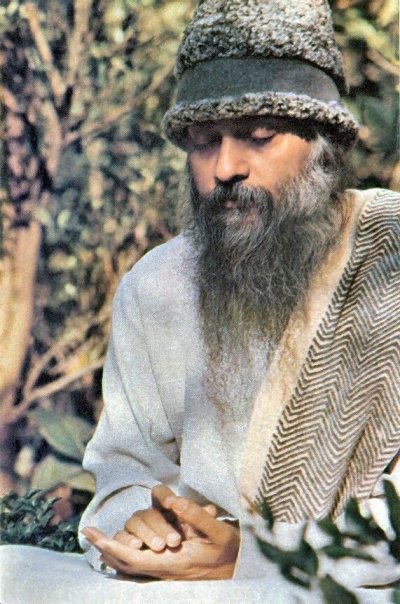 Osho – Mind thinks in Terms of Separateness, division analysis. Through mind, life is divided into fragments. Life itself is not divided; life itself is a unity. Life itself remains undivided, but the mind thinks in terms of fragments so whatsoever the mind says is bound to be false. The tree over there, the sky above you, the earth, you and everything are in a deep unity.

The tree appears to be separate from you. but it is not. it cannot be. The sun is so far away. but you cannot exist here if the sun dies. Immediately, you will cease to exist here. Without the sun there – ten crore miles away – you cannot exist here. If the sun ceases to exist we will never be able to know that it has ceased, because there will be no one to know it. We are part of the rays of it. The whole universe is a cosmic unity.

If you feel that you are one with life, you can trust it. Then there is no fear. Then you can die in it happily, ecstatically. Then there is no fear of death. The fear of death comes into existence because you think that you are separate. Then you start fighting, then you start protecting. You start seeing yourself as an enemy, in conflict. You think in terms of conquering, of being victorious. But then you will be defeated; your defeat is certain.

You are just a part of the whole, but you go on fighting with the whole. That’s why, everywhere, you see that everyone is a failure: defeated, frustrated. And in the end, everyone comes to realize that life has been a long defeat and nothing else. Not only those who are unsuccessful feel it. Those who are successful also feel it. A Napoleon, an Alexander, even they feel defeated. Why is this so?

A religious man goes beyond anxiety, beyond the fear of death, because now he knows that he is not and the whole is. Then how can there be fear? Even death becomes a communion, a meeting It is not dissolving. Rather, it is merging. It is not some thing that is against you.

Rather, it is a deep relaxation for you. Life is tension anxiety. Death is beautiful. You simply move into a deep relaxation. You move back to the source again. The wave will rise again, but for the moment it has ceased; it has gone into the ocean to rest. Death is a deep rest. And before a new birth, that rest is needed.

Once you realize this there is no fear. You accept everything once you accept and become aware of the deep unity, the organic, oceanic unity. You know that everything is one, that existence is one It appears in different forms a multi-million forms. but only forms differ.

Now you cannot die again, now death cannot destroy you. You have already surrendered; you are no more. Death will enter an empty house. You will not be found there. Only the ego dies, not you. Your life is eternal, but the ego is transitory. The ego is just a created, composed phenomenon. You have created it. It is needed, it has some utility. In society, you need an ego; but in life, in existence, that same ego becomes a barrier.

Existence never asks you who you are. When you drop the ego, you are ready to become one with the whole. These are really two ways of saying the same thing: either think that the whole existence is one, or think that there is no ego in you. Both will do the same thing, the result will be the same. You will come to an oceanic unity. And once known, that unity cannot be lost again.

KILL OUT ALL SENSE OF SEPARATENESS. Just become a drop – a drop of water that has fallen into the ocean and become one with it. And don’t fear death because, really, there is no death for you. The one who is afraid is a false phenomenon, a false entity – an entity that is created by the feeling of separateness. In meditation, remember that you are jumping back to the source, jumping into the source. You are moving from the ego to an egoless existence. Be ready to die in meditation. If you can die in meditation, you will attain eternal life. You will become deathless.