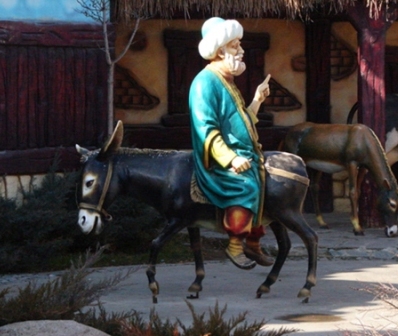 Osho – There is a Sufi story that Mulla Nasruddin wanted to learn swimming. But as he went close to the river with the teacher who was going to teach him, he slipped and fell into the river — and it was a deep river. He was saved by the teacher, but he went a few times under the water; and as he was taken out, he took his shoes and ran away.

Osho – A Sufi story… Mulla Nasruddin is appointed as the prime minister of a king because he was known to be very wise; somewhat weird was his wisdom, but still, wisdom is wisdom. The first day when they went to have their dinner together, a certain vegetable called bindhi was made by the cook, stuffed with Eastern spices. It is a delicacy.

The king appreciated the cook, and after that Mulla said, in appreciation of the bindhi, “This is the most precious vegetable in the world. It gives you long life, it keeps you healthy, it gives you resistance against diseases,” and so on and so forth.

But the king was bored. He threw the plate of bindhi and told Mulla Nasruddin, “You are an idiot. Bindhi… and God eats bindhi every day? You will drive me mad!”

Mulla said, “Lord, you are getting unnecessarily hot. I am your servant; you said bindhi was good, I simply followed you, and when I do something I do it perfectly. I am not a servant to bindhi, I am your servant. The truth is that bindhi is the worst thing in the world — even devils don’t eat it. You did well that you threw it.”

He threw his plate farther away than the king. He said, “You should always remember that I am your servant, and you are always right. And I am a consistent man; I will remain consistently your servant, whatever happens.”

Osho – The Sufi story is…. Mulla Nasruddin is chosen an honorary magistrate. The first case appears. He hears one side and declares to the court, “Within five minutes I will be back with the judgment.”

The court clerk could not believe it — he has not heard the other side! The clerk whispered in his ear, “What are you doing? Don’t you see a simple thing? You have heard only one party, one side. The other side is waiting, and without hearing them you cannot give any judgment.”

Mulla Nasruddin said, “Don’t try to confuse me. Just now I am absolutely clear. If I hear the other side too, then there is bound to be confusion.”

These Sufi stories are not just ordinary stories, they are extraordinary. It is saying that every judge is listening only to one side because he already has a prejudiced mind; he is not capable of listening to both sides. For that a totally different kind of man is needed — which no educationalist concerning law and jurisprudence has even thought about.