Osho – My new phase of work is a Mystery School 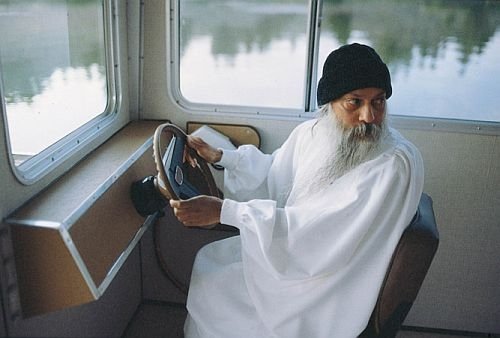 Question – Beloved Osho, We have experimented with Communes in both the east and the west that did not last. Buddha and other enlightened masters created communes that did last. What is the difference?

Jaina monks have to move continuously, except during the rainy seasons. In India, before atomic experiments started, the seasons used to be very fixed. Even dates and days were fixed — on what day the rains will begin and on what day the rains will stop — and there were three clear-cut seasons, four months each. So for four months in the rainy season they had to stop. But that also does not mean that thousands of sannyasins will be stopping in one place, but wherever they are. But the cunningness of man’s mind is such that I have seen Jaina monks who have lived their whole life in Bombay — somebody is there for fifty years… I enquired, “How is it being managed? — because it is against their basic rule and discipline. After three days they have to move.”

And I was told that in Mahavira’s time there were not such big cities as Bombay. Now the Jaina monk moves from one part of Bombay to another part of Bombay, and in this way he goes on moving around Bombay, inside Bombay, from one place to another place. But he remains in Bombay; he never leaves Bombay. Clever idea! From one suburb he will move to another suburb; that is another place. And in Mahavira’s time there were no such big cities these suburbs would have been different cities, different towns, so…”We are moving!” And they go on circling.

Bombay has a population of the daily population is nearabout ten million people. Forty million people come every day to work, from nearby towns, and they return in the evening. Sixty million people are living in the town. They are logically right, that there was no city in Mahavira’s time of such population. But the whole point is missed. The point was simply that you don’t become attached to a certain place, that you don’t start having friendships, likes, dislikes. In three days you cannot do much. One day you come, just one day you really stay, and the third day you have to move. It is not enough time to get into any politics, or any local problems. To avoid power politics, to avoid local problems, attachments, the device was created that you move after three days.

But after three days they go on moving in the same city — for fifty years, sixty years. They have immense contact with people. They are almost residents of Bombay! The people who like them come to listen to them wherever they are. Nobody had any commune the way we tried, and both the experiments have given great insights into human nature, so nothing has been a failure. We have learned much. So now I am not going to create a commune.

I am going to create a totally different thing: a mystery school… forty, fifty people will be there to take care of the school, and two hundred, three hundred, five hundred people can come for a one month course, or a two month course, or a three month course, and move on. And slowly, slowly we can train people so that they can open mystery schools around the world. A school is a different thing. You come for three months to learn something, to go through some experiences, and then you are back in the world, to your work, to your job.

The commune experiment has made it clear that if five thousand people are living in a commune, they will have to do many things — make roads, make houses, make other facilities for five thousand people, and for the guests who will be coming for festivals. These people will not have any time left for the real search they had come for in the first place. They will not have time for meditation. They will not have time to go within themselves, to find techniques and work upon them, because the work is such that you cannot just work five hours a day, five days a week; it will never be completed. You have to work ten, twelve hours a day seven days a week. You are tired — and moreover, what you are doing is only the necessary facilities for yourself. Soon you will have to start production; otherwise from where are you going to get your food, your clothes? So this is a vicious circle.

And when five thousand people are there, then there is bound to be power politics. Then you have to find group leaders, coordinators. It is not possible to give freedom to five thousand people: “Do whatsoever you like” — because they will all go swimming and trekking and playing their guitars, but then who will make the roads and the houses and do the farming? And how are your food and your clothes to be arranged? How long can we depend on donations? Sooner or later you will have to make factories and you will have to create something. Then this commune becomes just an ordinary world — so why make so much unnecessary trouble? Our basic reason was to give you an insight into yourself. That is completely forgotten in unnecessary trivia.

So my new phase of work is a mystery school. You work in the world, where roads are already there, houses are already there, you need not make them. Factories are already there… in thousands of years the world has created all that. So you can manage — five hours work five days a week is enough. On the weekend you can meditate, you can go into silence or you can go to some isolated spot and just relax. And in a year you will be able to earn so much money, save so much money, that you can come here for one month, two months, three months… as much as you can manage.

Not only this… when you start living with me there is a possibility that you may start taking me for granted, that I am always here. Nine months being away will bring you closer to me, because distance creates longing, creates love, creates understanding. So each year you will be coming, then going. Whatever you can manage… you can come twice. You will not be a burden on anybody, and there is no need for anybody to dominate you; there is no need for any strict discipline — work needs that. There is no need for coordinators, so we can avoid the power trip.

But both our communes have helped to bring us to this point where we can start a mystery school. Without those two communes it would have been impossible. This is my way of looking at things. Even failures bring you closer to success, because each failure gives you insight into what went wrong, how it went wrong. So both the experiments have been immensely significant.

Now we are in a position to create a totally different kind of place, which is simply a festival all the year round. People will be coming and going. They will take whatever they learn and they will practice it in the world, and they will come again to renew, to refresh, to go further, deeper. Only a skeleton crew will be here to take care of you.