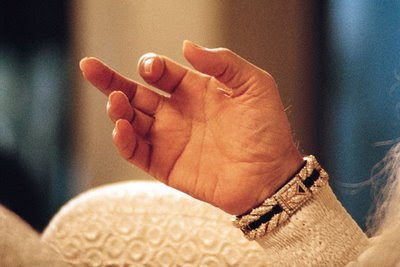 Osho – I have told you many times, but I love the incident so much, because in the contemporary world, and particularly in the West, nothing like it has ever happened …. In the East it has been happening to the Sufis, to the Zen monks, to the masters of meditation, but in the West this small incident stands unique – just like a burning torch in a dark night.

Gertrude Stein, a great poetess, is dying, she is breathing her last breaths. And she was loved by many people, she had many friends. She was a woman of tremendous creative qualities. Her poetry comes closest to the haikus of the Zen masters or to the poetry of Kabir, Nanak, Farid. Her poetry has something essentially of the East; she had some glimpses of the mystic experience.

At the last moment – it is evening and the sun has set and darkness is settling – she opens her eyes and asks, ”What is the answer?”

And those who have gathered to say good-bye to her are puzzled: ”Has she gone senile, insane? Perhaps death has shocked her and she has lost her rationality.” Certainly no man with a reasonable mind will ask, ”What is the answer?” because unless you have asked a question, asking, ”What is the answer?” is very irrational.

There was silence for a moment. Then one very close friend asked, ”But you have not asked the question. How can we answer?”
And Gertrude Stein had a faint smile and said, ”Okay, so tell me, what is the question?”

And then she died, so they had no time left to say, ”This question is as absurd as your first. First you asked for the answer without asking the question; now you are also asking the question from us! There are thousands and millions of questions. Who knows what question you want to be answered?”

It was one of the most beautiful deaths in the West. In the East we have known many beautiful deaths. It is very difficult for people to make a beautiful life. But there have been people who have lived beautifully and died even more beautifully! Because to them death comes as a culmination, as a climax of life, as if the whole life becomes a flame of fire – in a single moment, in total intensity – before disappearing into the universal.

She was not losing her mind in the sense that it is usually understood, but she was certainly going beyond mind and she was also going beyond the heart. Beyond these two diametrically opposite centers in you is a being which is utterly innocent of any questions or of any answers. It is so fulfilled in itself, so completely contented that there is nothing left to ask and there is nothing left to answer.

My own understanding is that Gertrude Stein died enlightened. The West has no understanding of enlightenment. They simply thought she was going crazy. But it was not craziness, it was a moment of great celebration. What she could not attain in her life, she attained in her death. And she gave the sure indications: no question, no answer and you have arrived home.