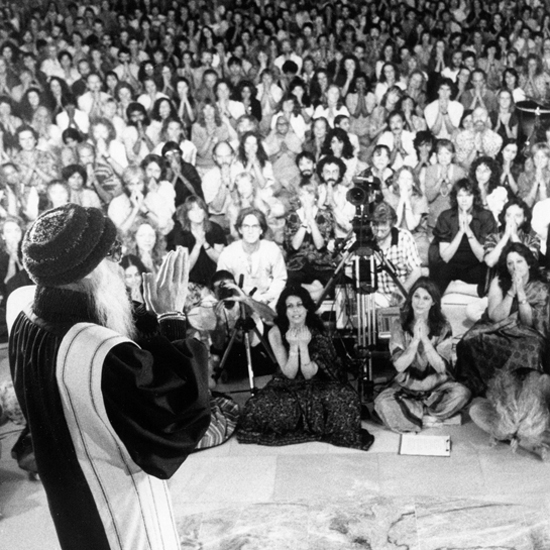 Osho: Truth has a magnetic force in it. It always attracts, particularly those who are young and fresh, particularly those who are not burdened with old rubbish and garbage and junk; who are receptive, capable of seeing, understanding. That’s why so many people, without any special effort on my part to attract them, have come close to me. I started the journey alone, and then people started coming and the caravan became bigger and bigger. Now it is surrounding the whole earth.

You are asking why more women are attracted. All the religions have condemned women. I am the first man who is trying to compensate for all the harm and the wounds that have been done by the past and its so-called religious people.

This has not been the case in the past. Gautam Buddha, a man I respect, I love — but that does not mean I agree with him on every point — denied for years initiation for women. He was not ready to initiate women, only men. Why? The woman is not so spiritual. Strange… the same people who go on saying that the soul is neither man nor woman, on the other hand start saying that the woman is less spiritual than man.

Only bodies are different; the souls cannot be different. And now we are more knowledgeable scientifically, a man can be changed into a woman just by plastic surgery. Then what will Buddha do? Will he initiate the man or not? — because he is a woman… But plastic surgery cannot do any harm to the soul.

Many women are changing into men. What is Buddha going to do? In fact, he will not ever be able to decide: is this woman really a woman or just a case of plastic surgery? One of my sannyasins who is a great plastic surgeon, Swami Leeladhar has changed many men into women, many women into men. Finally he got fed up with this changing. He asked me, “I took sannyas to drop this business, but you tell me to continue” — because if people want to change, that is their right and they should be helped; why should they wait for one more life? And in the next life perhaps — and that is always a perhaps — they may again become a woman, or again become a man.

Even Buddha denied, Mahavira denied that anyone can reach enlightenment from a woman’s body. I do not see the logic at all. Mahavira was a great logician, but I can see the male chauvinist mind working behind it. There is no logic at all why a woman cannot become enlightened. He said that every woman first has to practice religious discipline so that in the next life she is born as a man; then begins the growth towards enlightenment! — and the same is true about all religions.

I have accepted women for the first time on an equal basis to men. I am in favor of women’s liberation because I know that unless women are liberated, men will never be liberated. Their liberation is together, because they are two sides of the same coin. Naturally many more women have come, because for centuries they were denied, they were insulted, they were never accepted as equal to men. Naturally, more and more women will be coming — and only those men will be here who are ready to accept women as their equal.

No male chauvinists can remain around me.
It is a family of equal people, with equal dignity.

If women had been respected in the past, humanity would not have been in such a mess as it is today — because women are half of humanity. Half of humanity has remained undignified, uneducated, deprived of all freedom, all movement. We have hampered, handicapped ourselves. We have destroyed half of ourselves, and if we are in misery then who is to be blamed?

I am all in favor of women’s liberation — but not the way the women’s liberation movement is going. It is taking a reactionary attitude, it is not a real revolution. It is trying to imitate man. And remember, imitation never makes you equal; imitation at the most will make you a carbon copy — but the original is original.

Now women are smoking cigarettes like men, dressing like men, using four-letter words like men: great progress! Some day they will start pissing like a man! That will be the ultimate freedom of women. But all this is idiotic.

When I say women’s liberation, I have my own meaning. I mean the woman has to remain a woman, has to keep her distinctions clear, her distances clear, because the more distinct the woman is from man, the more attractive they are to each other.

Equality is one thing; similarity is totally different. Do not make them mean the same: don’t try to be similar to man. Equal opportunity is there for your growth — but that means you are going to remain unique and dissimilar. You are not a man, and you need not be a man, because man has nothing special.
You both are unique, and both are complementary.

And as far as spiritual growth is concerned, Gautam Buddha’s fear was not the woman, but sexual repression. His monks were all sexually repressed, and the fear was that if women were initiated then the monks and the women would be so close that there was fear that the monks would lose their celibacy. If celibacy remains something spiritual, then man and woman cannot be together on the spiritual path. But celibacy is unnatural and absolutely leads to perversions. Man and woman should be together, should be in deep love, should help each other to grow. Their help will be a great nourishment.