Osho – My Sannyasins celebrate death because they celebrate life 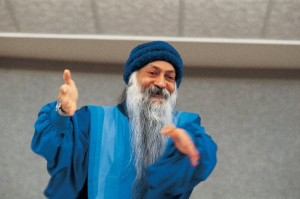 Question – Beloved Osho, I have heard that your Sannyasins Celebrate Death.

Osho – Paul, you have heard rightly! My sannyasins celebrate everything. Celebration is the foundation of my sannyas — not renunciation but rejoicing; rejoicing in all the beauties, all the joys, all that life offers, because this whole life is a gift of God.

The old religions have taught you to renounce life. They are all life negative; their whole approach is pessimistic. They are all against life and its joys. To me, life and God are synonymous. In fact, life is a far better word than God itself, because God is only a philosophical term, while life is real, existential. The word “God” exists only in scriptures; it is a word, a mere word. Life is within you and without you — in the trees, in the clouds, in the stars. This whole existence is a dance of life.

I teach love for life. I teach the art of living your life totally, of being drunk with the divine THROUGH life. I am not an escapist. All your old religions have been teaching you escapism — they were all in a certain sense hip. The word “hippie” has to be understood. It simply means one who escapes from the battle of life, who shows his hips…! All your old religions are hippie! They have shown their hips. They could not accept the challenge of life, they could not confront and encounter life. They were cowards; they escaped to the mountains, to the monasteries.

But even if you escape to the mountains and to the monasteries, how can you leave yourself behind? You are part of life. Life pulsates in your blood, life breathes in you, life is your very being! Where can you escape? And all those efforts to escape, considered correctly, are suicidal. Your monks, your nuns, your mahatmas, your so-called saints, were all suicidal people; they were trying gradual suicide. Not only were they suicidal, they were cowards too — cowards because they could not even commit suicide in a single blow. They were committing suicide gradually, in installments; by and by, slowly they were dying. And we have respected these unhealthy people, these unwholesome people, these insane people. They were against God because they were against life.

An old neo-sannyasin told an actor playing Hamlet that he himself had once played the part.
“What was your interpretation of the role?” asked the actor. “Did Hamlet really make love to Ophelia?”
“I don’t know if Hamlet did,” replied the sannyasin, “but I certainly did!”

Paul, my sannyasins celebrate death too, because to me death is not the end of life but the very crescendo of life, the very climax. It is the ultimate of life. If you have lived rightly, if you have lived moment to moment totally, if you have squeezed out the whole juice of life, your death will be the ultimate orgasm. The sexual orgasm is nothing compared to the orgasm that death brings, but it brings it only to the person who knows the art of being total. The sexual orgasm is a very faint thing compared to the orgasm that death brings. What happens in sexual orgasm? For a moment you forget that you are a body, for a moment two lovers become merged into one unity, into one organic union. For a moment they are not separate entities; they have melted into each other like two clouds which have become one.

But it is only for a single moment, then they are again separate. Hence all sexual orgasms bring in their wake a kind of depression, because you fall from the height. You reached a crescendo, and for only a fragment of a moment you remained on the peak and then the peak disappeared. And when you fall from that height, you fall into the depth of depression. This is one of the contradictions of sex: it gives you the greatest pleasure and also the greatest agony. It gives you ecstasy and agony — both. And each time you reach an orgasmic state, you know that soon it will disappear. Then there is disillusionment, disappointment.

Death gives you the ultimate in orgasmic joy: the body is left behind forever and your being becomes one with the whole. It is immeasurable. If to become one with a single person gives you so much joy, just think how much joy will happen in becoming one with the infinite! But it does not happen to everybody who dies, because the people who have not lived rightly cannot die rightly either. The people who have lived in deep unconsciousness will die in deep unconsciousness. Death will give you only that which you have lived all your life; it is the essence of your whole life.

If your life was of meditativeness, awareness, witnessing, then you will be able to witness death too. If your whole life you remained cool, centered in different situations, death will give you the ultimate challenge, the ultimate test. And if you can remain centered, calm and cool and watching, then you will not die an unconscious death, your death will bring you to the ultimate peak of consciousness. And then, certainly, it HAS to be celebrated. So whenever one of my sannyasins dies, we celebrate, we dance, we sing. We give him a good farewell.

A midget had died and left a widow. Friends came to pay their condolences and look at the body lying in an upstairs room of the house. After one friend came down he was asked by the widow whether he had shut the door of the room where the body lay.

“No,” said the visitor, “I didn’t think it was necessary.”
“Then I’d better go upstairs and shut it,” replied the widow. “The cat has had him downstairs twice already. You know, my cat is a neo-sannyasin and he wants to celebrate the occasion!”

Little Pierino goes camping with his parents. A little while after, at the end of a day doing many things, they bed down for the evening. Pierino cries, “Mummy, I can’t sleep. There is a dead ant on my belly!”
“Shhh, Pierino,” says his mother, “be a good boy, just go to sleep — it is nothing to worry about.”
After a few minutes Pierino’s voice is heard again, “Mummy, Mummy, I can’t go to sleep — I’ve got a dead ant on my belly!”
“Pierino,” scolds his mother, “come on now, don’t tell me that a small dead ant stops you from sleeping!”
“Well,” replies Pierino, “it is not the dead ant really, it is all his orange sannyasin friends that have come to celebrate his death!”

Yes, Paul, my sannyasins celebrate death because they celebrate life. And death is not against life; it does not end life, it only brings life to a beautiful peak. Life continues even after death. It was there before birth, it is going to continue after death. Life is not confined to the small space that exists between birth and death; on the contrary, births and deaths are small episodes in the eternity of life.

My sannyasins live in choiceless awareness. We are not choosers; we simply accept whatsoever is the case. The materialists — the Charvakas in India and the Epicureans in Greece — denied the soul. They said, “There is no soul. The soul is just imagination. The soul is illusion.” And the spiritualists — Shankaracharya in India and Berkeley in Europe — these people said that matter is illusory, maya. The body does not exist really, it is only your imagination. It is a dream, made of the same stuff as dreams are made of; you are a soul. But both are agreeing on one point: that they cannot accept reality as it is, they have to choose.

It is as if one electrician chooses the positive pole and another electrician chooses the negative pole, and each denies the other pole. There will be no electricity, no light in the world. That’s what has happened: the spiritualist has not been able to transform the world, the materialist has failed also — because the world exists with polar opposites. Without polarity there is no world at all. The day is needed as much as the night; the body is needed as much as the soul; the world is needed as much as God. There can be no circumference without a center and there can be no center without a circumference. This is a simple fact.

My sannyas is the acceptance of that which is. We are not choosers. Who are we to choose? And what difference is our choice going to make? You can choose whatsoever you like, but whatsoever you don’t like is going to remain there. Just by not choosing it, it is not going to disappear. And because you have not chosen it, you will remain half, lopsided. The East has remained lopsided because of so-called spirituality. It has remained poor, unscientific — without any technology, without industry. It has become lousy, lazy, lethargic; it has lost all joy in existence because “this is all a dream, why bother about it?”

It is hungry, ill, poor, but “this is all illusion. You are simply dreaming that you are poor, you are not really poor. You are simply dreaming that you are starving, you are not starving.”
And the West has chosen materialism, so there is great technology, beautiful houses, better roads, better cars, better airplanes, but man is very empty and meaningless. Without spirituality there is no center; man falls apart. The Western man is half; the Eastern man is half. My effort here is to create the whole man. To me the whole man is the only holy man. The East and the West have to meet; they have to become complementaries, not antagonists.

But this is possible only if we change the whole philosophical background. Hence I teach a very contradictory philosophy. Spiritual materialism is the name that I give to my philosophy. I want you to be materialists and spiritualists simultaneously, in a balanced way. I would love society to have all the facilities, all the comforts and conveniences that science and technology can provide, and I would also love people to have a great awareness inside them so that they can enjoy whatsoever science provides. I would like everybody to be a buddha, but at the same time I would also like the world to become more and more comfortable, more and more loving, more and more beautiful.

We can transform this world into a paradise, but then we have to stop choosing. We have simply to accept the whole as it is, with all its contradictions. Those contradictions are contradictions only because of our logical obsession; otherwise they are complementaries. Life and death — both are beautiful.