Osho – Nanak says, you can say nothing about God; therefore it is best to keep silent about Him 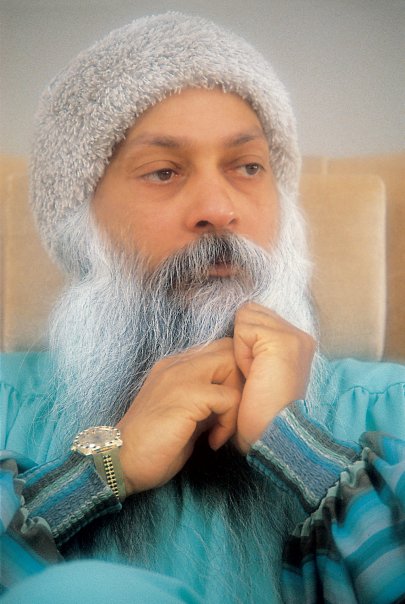 Osho – How can we say anything about God? For He has no beginning, no end, nor any limit. The only thing we can possibly do is to be silent about Him. What will you say? What can you say about Him? What can you say in connection with meditation? Then give it great deliberation and thought.

Understand that meditation is the method; and God, paramatma, is at the completion of the experience, the knowledge. You may be able to say something about the path if you have traversed it, but nothing about the destination, which is boundless; it has no limits, no direction. I cannot tell you what God is but I can certainly tell you how I have reached Him; the path can be spoken about.

Buddha has said that a buddha can only give a hint and show the path, nothing more. Nanak has said again and again: I am only a physician who can prescribe the medicine. I know nothing about health. The doctor’s knowledge is confined only to the treatment of a certain ailment; his medicine cures the disease but he has no knowledge of health, the well-being which fills a person with joy and gratefulness when the illness is gone – he knows nothing about that!

Whatever is spoken about God can only be negative. At most we can say, ”He is not this… He is not that….” As soon as you say, ”He is this,” you confine Him within a boundary; becauseonly that which bears an outline, a boundary, can be pointed out. The limitless cannot be pointed out. Therefore Nanak says, you can say nothing about God; therefore it is best to keep silent about Him.

But nowhere in the world do we find people silent on the subject of God. In fact it is a constant topic of heated discussion. There are seminars and meetings where pundits debate on the existence or nonexistence of God. Busily proving their points, no one worries about the fact that God cannot be proved, much less disproved. God can be known, He can be lived. We can become God, but He cannot be proved nor disproved.

How will you prove that God is? Whatever you say of Him will be wrong – absurd and wide of the mark. Or how will you prove that God is not? That will also have to be absurd and irrelevant. Whatever you say about Him can only be absurdly incomplete, because God is the totality, the whole. The vast space that spreads all around you and far out into infinity is referred to in that simple word God. God is not a person sitting somewhere on high – God is an experience of being drowned, of being bathed in divinity, of being lost in it. God is a state in which you no longer are, and yet you are very much there.

So, says Nanak, nothing can be said about him. Only something can be said about meditation – but that too only if you have experienced it, and after due contemplation. Make it a rule for yourself to speak only of that which you know, and this small rule can transform your life. Forget about the rest of the world; worry only about yourself and don’t budge from this rule.

We love to exaggerate. Say we know an inch of something, we want to give a mile’s worth of information about it. We know only a grain and we set out to discuss a mountainful. The state of mind is a state of exaggeration, becausethe ego revels in overstatements.

Mulla Nasruddin fell down on the road. He became unconscious and was taken to a hospital. When he was placed on the operating table, they found a piece of paper in his pocket on which was written in large letters: ”I suffer from epileptic fits. Please do not operate on me for appendicitis. My appendix has already been removed many times.”

The mind elaborates with great zest and alacrity. It gets a great kick out of it. A slight knowledge of something and you begin to elaborate, adding spice and color; and the more you color the falser your knowledge becomes till ultimately the essence is lost and only the color remains.

Always say proportionately less of what you know and that will harm no one. Beware of the urge to exaggerate. And this holds good not only in talking about god, but also about meditation, about life and existence. For existence is vast; whatever you have known of it is but an infinitesimal part, not enough to give you the authority to pontificate.

For instance, you are a shopkeeper. You have known only your shop, whereas existence is a vast thing in which there are infinite ways of living. You have not known life in its entirety. While there are thousands of shops dealing in thousands of things, you have only dealt in one particular kind of goods. Even as a shopkeeper you can at most claim to know only one kind of shop, and of the thousands of customers, you can claim to have known but a few; that is the sum total of your experience – a mere grain.

Newton has said, ”People think I know a great deal. My own feeling is that the knowledge I have attained is like one grain of sand on the seashore. This one grain is my knowledge, whereas my ignorance is as much as the remaining grains on the shore!”

Direct your attention to what you do not know, what is as yet left to be known. This will make you humble; whereas if you concentrate only on what you know, your back will become stiff with arrogance, as your ego is strengthened. Always concentrate on what is yet to be known, what is yet to be experienced. There you will find endless vistas of knowledge yet to be explored and you will feel the futility of keeping count of the knowledge of things you know; becauseit will look ludicrous, almost nothing!

Therefore Socrates says: When the sage attains the supreme knowledge he finds there is only one thing that remains to be known – that I know nothing! This is the characteristic of a sage: he knows he knows nothing. Therefore Nanak says to keep within limits, be simple, be humble. Say only what you know and, on the subject of God ,hold your peace! For what can you say about him? Whatever you say can be no more than gossip. Can an ant speak of the ocean? Who are you to prove His existence or nonexistence? Who has appointed you the judge? Does God depend on your arguments to make Him or break Him?

Keshav Chandra came to visit Ramakrishna to debate on the existence or nonexistence of God. He elaborated many points to prove that God does not exist. As Ramakrishna listened his heart thrilled with joy. He embraced him lovingly and said, ”You have been very kind to come to me, a simple villager. I have never witnessed such magnificent intelligence, and looking at you now I am thoroughly convinced that there can be no greater proof that God is. How can a flower like you ever bloom if it were not for Him?”

Keshav Chandra had come expressly to prove that God is not. His arguments were very lucid and clear, his reasoning so subtle. Such a great logician and genius is born only once in a thousand years. Though it was very difficult to answer him, Ramakrishna did not put forth even a single counter-argument! Ramakrishna was so filled with love and delight at the sight of Keshav Chandra, and was so genuinely convinced thereby of the fact of God’s existence that Keshav Chandra was struck dumb by his pure ecstasy. Ramakrishna told him, ”That you exist is proof that the world is not just material. If such a process of intelligence can be, if reasoning can be so subtle, then this world is not of matter alone; it is not as gross as the stone; there surely is a consciousness hidden within it. For me, your very being has proved that God is.”

Keshav Chandra returned home and wrote in his diary that this man had won over him. It is difficult to defeat a religious man who offers no arguments. You can only defeat a person who reasons and argues, where all that is required is to be a better debater, a cleverer speaker.

A religious man gives you no ground for a debate when he refuses to compete with you. He says: I believe in God. I have faith in God. I have no opinion or decisions to make about Him. God is my feeling, not my thought. God is in my heart and not in my head. And the heart keeps silent. A religious man is always silent when questioned about God. Ask him about meditation and he will speak, but only as much as he knows directly.

People in ancient times were honest. There is a beautiful story in connection with Buddha’s search for truth. For six years Buddha had gone from guru to guru. After each guru taught him all that he knew, he would move on to another. Then the moment came when Buddha knew all that the gurus knew. Buddha asked the last guru, ”What shall I do now?”
”I have taught you all that I know,” said the guru. ”You will have to look for someone else.”

This last guru of Buddha was Alar-Kalam. As Buddha took leave of him Alar-Kalam said, ”I have revealed all knowledge that I have attained and have no more to give. Go forth and seek another who can direct you further, but do not forget to impart that knowledge also to me!”

This is the reason that many people of the past attained wisdom, for honesty was a part of their nature. In today’s world who worries about honesty? If you can put forth your arguments impressively, it doesn’t matter whether you really know what you are talking about, because people are bound to flock around you. It is a matter of how you advertise yourself, like any marketable commodity. If you advertise well, if you succeed in awakening the passion and the greed of the people, you are bound to attract a formidable clientele. It is so easy to become such a guru!

Therefore Nanak says to be very careful what you say about meditation, because it is religion that supports the earth. By even a few right or wrong statements you can upset the lives of thousands of people; one wrong statement can sow confusion for endless births. Religion is not a small matter; it is the basis of your life, the support of all existence. Only speak what you truly know about religion. To develop a false conception of religion is to lose all that supports and maintains your being. Religion upholds and maintains the earth. It arises out of compassion and pity, and the establishment of contentment forms its equilibrium.

One thought on “Osho – Nanak says, you can say nothing about God; therefore it is best to keep silent about Him”