Osho – Never fight over children because then the child starts feeling ’What is happening?’ 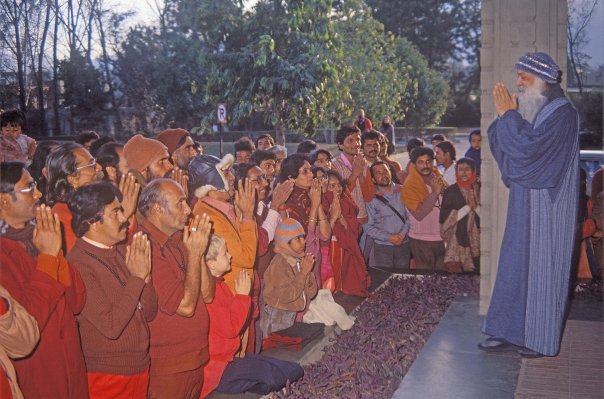 [A sannyasin asks about returning to the West to take custody of her son, as she and her husband are divorcing.]

The father loves the son as much as you do, and he may be simply worried that you have gone berserk or something. Mm? – you have become a sannyasin in orange clothes, and you have fallen into some hypnotic situation, the father must be thinking. And of course he has to think about his son too. If you bring the son, he will become a sannyasin, so the father is afraid, mm?

But my feeling is that there is no harm for the son. And it is always good for the son…. He has been with you for five, seven years; that is quite enough education you have given, as much as he needs from a woman. Let him be with the father and he will be enriched by that; he will not suffer through it. But if he feels this conflict – that the father wants to pull him towards him and you want to pull him towards you – he will be torn. Think of him. If you love him, then think of him.

Never fight over children because then the child starts feeling ’What is happening?’ – he is in a conflict then. … This is hurting your ego, nothing else, so you want to take the revenge on the son. If he is settled and feeling good, then perfectly good. That’s all love wants – that the child should be happy. If he is happy there, perfectly good! That’s why I am saying that you can be here for three or four months more. First you become really orange, not only from the outside but from the inside too.

When even your blood has become orange juice then you can go. And then the child will see what a beautiful mother! What has happened to the mother? – something beautiful, something tremendous! Then he will be able to come. He will become interested in me. Right now there is no point. Right now you will go and you will be anxious and anxiety-ridden and you will start fighting and that will create a mess. The thing can go to the court and things become ugly, mm? That’s not good, not good for the child.

And what is wrong? He is seven years old, almost old – because children learn fifty percent by the age they are seven. He will learn only fifty percent more in the rest of his life, so he has been taught almost fifty percent by you. Now let fifty percent be done by the father. Nothing Is wrong in it. But if you are worried too much, you can go and have your trip. It is meaningless. Then it will be having it the american way. You can go and fight and force the child… but I don’t see that it has any point. Even there the child can say ’I don’t want to come’ – then? Then you will feel more hurt.

The child must be feeling more freedom with the father, because the father cannot be such a guard for twenty-four hours as the mother can be. The father has a thousand other things to do, so he must be free – looking at tv the whole day! He will be enjoying… more! When he is with you you are after him twenty-four hours!

My feeling is: let him enjoy, and after three months you can go. Then it will be possible. Let him become interested. Just go on writing letters to him about what is happening to you, that’s all. Let the child be acquainted, and once he wants to come there is no problem. Just wait, mm?

And it will help you, your growth also, to wait. This is just egoistic – and you understand it, but it is hard to follow your own intelligence sometimes. Other things become more valuable: revenge, and ’what does this man think – that he can have the child? I will show him!’ No need to do that, no need.

You have taken such a turn, things are growing and much is possible now. Just going in the middle of it will not be good. You are very fragile. The plant has just come out of the earth. It is very soft and weak; it can be destroyed by anything. By any accident it can be destroyed.

I always allow people to go when I feel they are strong enough and there is no fear, they can go anywhere, and they will be growing anywhere they are… then I send them. But to you I will not suggest that right now. And you are going for a very wrong purpose… almost immoral. Wait, mm? just wait. Just enjoy it here and the child will come…