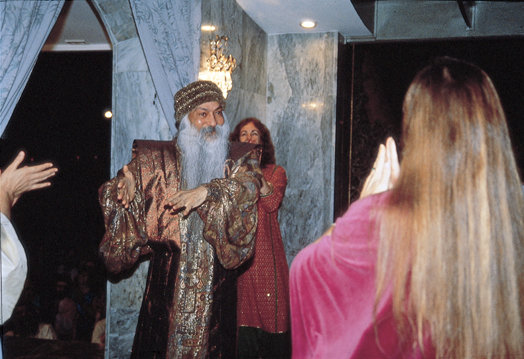 [A sannyasin newly arrived says: I’m very glad I’m here, but I feel like I left a part of my heart in london. It’s making it a little difficult but I’m trying very hard to be present here.]

Osho – Don’t try very hard. Just relax! If you try very hard you will not succeed. Trying never succeeds, because trying creates the split. A part of you is still there, and you are trying hard – this is another part. At the most you can repress the first part, but the repressed part will take revenge. Whenever you are not repressing it, it will bubble up again. Don’t do it.

It is natural… it is very natural – it happens to everybody, so there is nothing unnatural about it. When you come from a place where you have lived, loved, where friends exist, the familiar atmosphere, the home, you feel uprooted for a few days – at least for three, four weeks… natural. If it is not that way, that will be unnatural. No need to fight with it – just accept it; it is natural, mm? You uproot a plant and put it into new soil – for a few weeks it will suffer.

The roots will take time to get acquainted with the new soil, to make love to the new soil, to enter into it, to again become desirous of living with this new home. It takes a little time, a gap. In that gap everybody hankers with nostalgia – naturally.

So my suggestion is not to fight – because that will repress the other part. Rather than coming out of it naturally, you will repress it – and the repressed is never destroyed. That can become a very deep bind. You know because you have repressed it, so you know where it is. It is just there in the basement of your being and you know! You will become afraid of going into the basement, because whenever you go into the basement it will be there.

You will become afraid of really going deep into meditation, deep into groups, because it will be there. So you will go so far and will not enter further, and that will become a hindrance. And it is not only about this thing – I am saying in general: don’t repress ever! Accept it – it is natural.

This is new. Within a few days this will become your home so that when you go back to london, for three, four weeks you will remember poona – again it will happen there… natural. Always remember: never fight with natural things, otherwise perversions arise. Accept the natural and you will never be moving into perversion in any way. The natural has to be accepted and lived.

The whole of humanity is suffering from effort, and everybody has been taught to make effort. Effort comes out of will, and will is nothing but another good name for the ego. The ego is the basic root of all problems, and that has to be dropped. But when I say that it has to be dropped, I don’t mean that you have to fight, because who will fight? You are the ego! So only through natural understanding, by and by…. The more understanding you become, the more things start disappearing.

A woman was brought to me – she is a professor, a very intelligent woman. Her husband died, and she was brought to me after six months, because she was going a little crazy. And nothing was wrong. I enquired into the whole thing. The only thing wrong was this – that when her husband died, she didn’t cry. Intellectually she resisted the very idea of crying. It was below her.

’What is the point?’ she said. ’If somebody is dead they are dead, so what is the point of crying? It is illogical, meaningless. By my crying, he is not going to come back.’ So she tried hard not to cry and not to show the weakness. Everybody appreciated her and people said, ’She is really a woman of strong will!’ And she had loved so much… it was a love marriage.

Against her parents, against her society, against her religion, she had married a Mohammedan – she was a Hindu. It is very difficult in India… almost impossible! She had fought for it. Her family denied her, the society expelled her, but she fought with it, and then this man died… and she would not even cry and she would not weep!

For three, four months it was okay – she maintained that control. But then the repressed started destroying her from the within… it started like a worm. And then she became shaky… a little crazy. Mm? the repressed became too volcanic and she was sitting on the volcano.

When they brought her to me, I listened to the whole thing and I said, ’There is no problem… there is no need’ – because the psychiatrist was suggesting electro-shocks.’There is no need – she needs simply to cry.’

She understood the point. Immediately she started crying and within a few minutes she was sobbing madly, and started rolling on the floor. Within half an hour the storm was gone and all her craziness disappeared. She was happy, and to see her face was beautiful – those tears washed away the whole dust of those six months. She cried like a child. She had wanted to cry but she had been repressing it.

So never repress anything. That’s why the whole humanity is a little berserk. Never repress. And it is good – if you feel you remember london, cry a little. It is good! London is beautiful… as beautiful as poona! Nothing is wrong with it… but don’t fight!

Simply relax. Sometimes in the night, sit on the bed. For half an hour think of London nothing wrong… cry a little! You will feel very good… and you will be more here. Bring your whole energy into meditation, into dancing, singing. And soon… mm? you will find your real family here and real home. I’m here! Just get more and more drunk with me, mm?