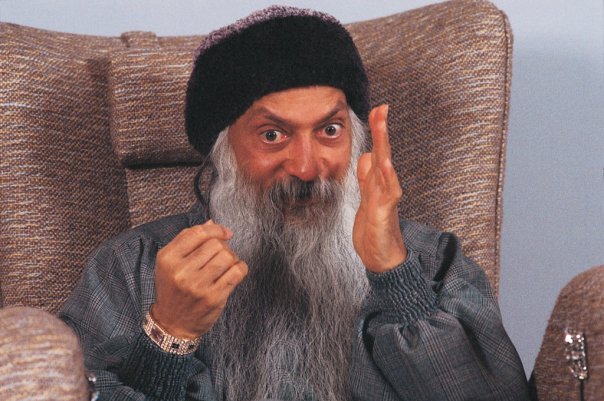 Question – Osho, I know I should be unattached. Now I judge myself for having bought beautiful orange material rather than having the courage to run around like some do in some dirty rag.

For these small things also society does not allow you freedom. If I were to decide, I would give you total freedom – if you want to move naked you should. If I had the decision in my hand I would make only one rule – you should not interfere in anybody else’s freedom. That’s all. When you interfere in anybody’s freedom, then only do you commit a crime. If you are doing a thing by your own self and it is nobody else’s business, you should be completely free.

The state should only be there to guarantee everybody his own freedom – freedom to do his own thing. The state should not be a positive phenomenon, it should be just a negative phenomenon – negative in the sense that you should enjoy your life but there are others also and they have to enjoy their life. You should not interfere in their life and they should not interfere in your life. That’s all the state is meant to do. It is not to create order, it is only to create a situation in which the disorder is to be prevented. That’s all.

So if somebody is enjoying rags, and rags are beautiful for him, nobody should interfere. And if you enjoy beautiful clothes, why not? Why do you feel afraid to enjoy beautiful clothes? It is for you to decide. Be courageous. There is only one courage I support and that is the courage to be oneself. Be courageous, have the courage to be oneself; and don’t bother about anybody else unless you are interfering in their life and freedom – only then prevent yourself.

Now, if you are wearing beautiful clothes you are not interfering in anybody’s life. It is for you to decide. But the mind has become such a conditioned phenomenon that it always looks at society, at what others are doing. If you live in the world of the establishment, the square world you have to follow certain rules.

If you live in a hippy world and don’t smell like hell you are not a hippy, not a true hippy. You will be rejected. You have to be dirty, you have to be unclean, otherwise you are not rebellious. If you move in the established world, the establishment, then you have to use perfume and shaving lotion and this and that. If you go there unclean you will not be accepted.

The mind is a conformist. So I know of only one rebellion and that is the rebellion of a meditative mind, the rebellion in which you drop the mind and move on your own. But always remember that you should not interfere in anybody else’s life.

For example, if you want to be dirty then go to the Himalayas, because to be dirty can interfere in other people’s life. When you are dirty and smelling bad you may not be attacking with your hands but you are attacking with your smell, it is aggression. If the other feels that this is a disturbance to him, then you are aggressive. If you want to be dirty – and nothing is wrong in being dirty – then you move to the Himalayas, to the farthest end, so nobody comes in contact with you. Then you can enjoy your bad odor, and enjoy it blissfully. You have no right to throw your smell and dirt on others, no, that’s not good.

Nobody should in any way interfere in anybody else’s life and nobody should allow anybody else to interfere in his life. This is how a man should be: not trying to enslave others and not allowing anybody to enslave him. One should live a life of freedom and one should allow others to live freely. Don’t be afraid, if you love beautiful orange material, use it, it is good. Whatsoever you love is good. There is only one condition: if it doesn’t interfere it is beautiful, it is moral.