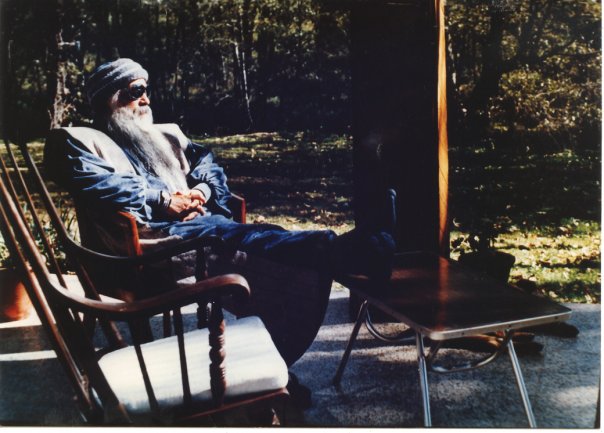 But one should not confuse this doing with meditation. Life energy works in contradictions. Life exists as a dialectic: it is not a simple movement. It is not flowing like a river, it is dialectical. With each move life creates its own opposite and through the struggle with the opposite, it moves forward. With each new movement the thesis creates the antithesis. And this goes on continuously: thesis creating antithesis, being merged with antithesis, and becoming a synthesis that then becomes the new thesis; then again, there is the antithesis.

By a dialectical movement, I mean it is not a simple straight movement; it is a movement divided unto itself, dividing itself, creating the opposite, then meeting with the opposite again. Then, again, dividing into the opposite. And the same thing applies to meditation, because it is the deepest thing in life. If I say to you, ”Just relax,” it is impossible because you do not know what to do. So many pseudo teachers of relaxation continue saying, ”Just relax. Don’t do anything; just relax.”

Then what are you going to do? You can just lie down, but that is not relaxation. The whole inner turmoil remains, and now a new conflict is there – to relax. Something over and above is added. The whole nonsense is there, the whole turmoil is there, with something added – to relax. A new tension is now added to all the old tensions.

So a person who is trying to live a relaxed life is the most tense person possible. He is bound to be because he has not understood the dialectical flow of life. He is thinking that life is a straight flow; you can just tell yourself to relax and you will relax. It is not possible. So if you come to me, I will never tell you to just relax. First be tense, as utterly tense as possible. Be tense totally! First let your complete organism be tense, and go on being tense to the optimum, to your fullest possibility. And then, suddenly, you will feel a relaxation setting in.

You have done whatsoever you could do, now the life energy will create the opposite. You have brought tension to a peak. Now there is nothing further; you cannot go on. The whole energy has been devoted to tension, but you cannot continue with this tension indefinitely; it has to dissolve. Soon it will begin to dissolve; now be a witness to it. Through being tense you have come to the verge, to the jumping point; that is why you cannot continue.

If you continue further, you may just burst and die. The optimum point has been reached, now the life energy will relax by itself. It relaxes. Now be aware and see this relaxation setting in. Each limb of the body, each muscle of the body, each nerve of the body is just going to innocently relax without anything being done on your part. You are not doing anything to relax it; it is relaxing. You will begin to feel many points in the organism relaxing.

The whole organism will just be a crowd of relaxing points. Just be aware. This awareness is meditation. But it is a nondoing; you are not doing anything because being aware is not an act. It is not an act at all; it is your nature, a very intrinsic quality of your being. You are awareness. It is your unawareness that is your achievement, and you have achieved it with much effort.

So to me, meditation has two steps: first, the active, which is not really meditation at all, and second, the completely nonactive, the passive awareness that is really meditation. Awareness is always passive, and the moment you become active you lose your awareness. It is possible to be active and aware only when awareness has come to such a point that now there is no need of meditation to achieve it, or to know it, or to feel it.

Consciousness is passive… and meditation is bound to be passive, because it is just a door to consciousness, perfect consciousness. So when people talk about ”active” meditation, they are wrong. Meditation is passivity. You may need some activity, some doing, to get to it – that can be understood – but this is not because meditation itself is active.

Rather, it is because you have been active through so many lives, activity has become so much a part and parcel of your mind, that you will even need activity to reach nonactivity. You have been so involved in activity that you cannot just drop it. So persons like Krishnamurti may continue to say, ”Just drop it,” but then you will continue to ask how to drop it. He will say, ”Do not ask how. I am saying: just drop it! There is no ’how’ to it.

There is no need for any ’how’.” And he is right in a way. Passive awareness or passive meditation has no ”how” about it. It cannot have, because if there is any ”how” then it cannot be passive. But he is wrong, too, because he has not taken the listener into account. He is talking about himself. Meditation is without any ”how,” without any technology, without any technique. So Krishnamurti is absolutely correct, but the listener has not been taken into account. The listener has nothing but activity in him; to him everything is activity.

So when you say, ”Meditation is passive, nonactive, choiceless; you can just be in it. There is no need of any effort; it is effortless,” you are just speaking a language that the listener is unable to understand. He understands the linguistic part of it – that is what makes it so difficult. He says, ”Intellectually, I understand completely. Whatever you are saying is completely understood.” But he is unable to understand the meaning.

There is nothing mysterious about Krishnamurti’s teachings. He is one of the least mystical teachers. Nothing is mysterious; everything is obviously clear, exact, analyzed, logical, rational, so anyone can understand it. And this has become one of the greatest barriers because the listener thinks he understands. He understands the linguistic part but he does not understand the language of passivity.