Osho on Anger – Anger is always proportionate to desire 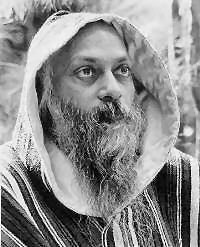 Question – Beloved Master, What is anger? How can i remain cool and connected, but responsive in the crucial moment?

Osho – The psychology of anger is that you wanted something, and somebody prevented you from getting it. Somebody came as a block, as an obstacle. Your whole energy was going to get something and somebody blocked the energy. You could not get what you wanted. Now this frustrated energy becomes anger — anger against the person who has destroyed the possibility of fulfilling your desire.

You cannot prevent anger, because anger is a by-product, but you can do something else so that the by-product does not happen at all. In life, remember one thing: never desire anything so intensely as if it is a question of life and death. Be a little playful. I am not saying, don’t desire — because that will become a repression in you. I am saying, desire — but let your desire be playful.

If you can get it, good. If you cannot get it, perhaps it was not the right time — we will see next time. Learn something of the art of the player. We become so much identified with the desire, then when it is blocked or prevented our own energy becomes fire; it burns you. And in that state of almost insanity you can do anything — for which you are going to repent. It can create a series of events that your whole life may get entangled with.

Because of this, for thousands of years, they have been saying, “Become desireless.” Now that is asking something inhuman. Even the people who have said, “Become desireless” have also given you a motive, a desire: if you become desireless you will attain to the ultimate freedom of moksha, nirvana. That too is a desire.

You can repress desire for some bigger desire, and you may even forget that you are still the same person. You have only changed the target. Certainly, there are not many people who are trying to get moksha, so you will not have any great competition. In fact, people will be very happy that you have started going towards moksha — one competitor less in life. But as far as you are concerned nothing has changed. And if anything can be created which disturbs your desire for moksha, again the anger will flare up. And this time it will be far bigger, because now the desire is far bigger. Anger is always proportionate to desire.

I have heard… There were three monasteries — Christian monasteries — very close together in the forest. One day three monks met at the crossroads. They were coming from the villages back to their monasteries — each belonged to a different monastery. They were tired. They sat down under the trees and started talking about something to pass the time.

One man said, “One thing you will have to accept is that as far as scholarship is concerned, learning is concerned, our monastery is the best.”

Even humbleness can become an ego trip. Egolessness can become an ego trip. One has to be very much aware. You should not try to stop anger. You should not, in any way, keep the anger controlled, otherwise it will burn you, it will destroy you. What I am saying is: you have to go to the roots. The root is always some desire which has been blocked, and the frustration has created the anger.

It is unfortunate that no religion in the world has accepted the sense of humor as one of the basic qualities for the religious man. I want you to understand that sense of humor, playfulness, should be the fundamental qualities. You should not take things so seriously, then anger does not arise. You can simply laugh at the whole thing. You can start laughing at yourself. You can start laughing at situations in which you would have been angry and mad.

Use playfulness, a sense of humor, laughter. It is a big world, and there are millions of people. Everybody is trying to get to something. It is very natural that sometimes people may get into each other’s ways — not that they want to, it is just the situation, it is accidental.

I have heard about one Sufi mystic, Junnaid, who every day in the evening prayer used to thank existence for its compassion, for its love, for its care.
Once it happened that for three days they were traveling and they came across villages where people were very antagonistic against Junnaid, because they thought his teachings were not exactly the teachings of Mohammed. His teaching seemed to be his own, and, “He is corrupting people.”

So from three villages they had not got any food, not even water. On the third day they were really in bad shape. His disciples were thinking, “Now let us see what happens in the prayer. How can he now say to existence, `You are compassionate to us — your love is there. You care about us, and we are grateful to you.’?”

But when the prayer time came, Junnaid prayed the same way. After the prayer the followers said, “This is too much. For three days we have suffered hunger, thirst. We are tired, we have not slept, and still you are saying to existence, `You are compassionate, your love towards us is great, and you take so much care that we are grateful to you.'”

Junnaid said, “My prayer does not depend on any condition — those things are ordinary. Whether I get food or not I don’t want to bother existence about it — such a small thing in such a big universe. If I don’t get water… even if I die, it does not matter, my prayer will remain the same. Because this vast universe… it makes no difference whether Junnaid is alive or dead.”

This is what I mean when I say, don’t take anything seriously — not even yourself. And then you will see anger simply has not happened. There is no possibility of anger. And anger is certainly one of the great leakages of your spiritual energy. If you can manage to be playful about your desires, and still be the same whether you succeed or you fail…

I can never forget one instance, one incident…. There was a wrestling competition, a district competition; all the district schools were participating in it. The school where I was studying had no such great wrestler, but we somehow managed one young man who said, “I am not a wrestler.” But I said, “You see the thing — not to participate will look very bad.”

And he was a very simple man. He said, “If you say, and if you all think that it is good for me to join… but I don’t know anything at all. I have never been to the gymnasium, I have never done any exercises. You are putting me in such a situation. But if you want, and if you cannot find anyone else, it is okay.”

So he was to participate for our school. And the strange thing was that because he was not tense — he was prepared to be defeated any moment, with anyone; he was the most relaxed wrestler — he got into the semi-finals! Our teachers, our principal, our students were simply… could not believe what had happened. Where had this man been hiding?

And in the last round, the man with whom he had to fight was really a very big man, very muscular; he was really a trained wrestler. We came to know later on that he was not a student, that some school had brought in a wrestler. We were all afraid for our poor man. He looked so small beside that man that we were worried what was going to happen. But what happened was more than anyone could have even dreamed. Our wrestler jumped around the whole area — a dance before going into the fight! The wrestler was a little uneasy about what he was doing. And then he came and just fell flat in front of the wrestler and told him, “Please sit on my chest and be the winner. What is the point of unnecessary fighting?”

Almost everybody appreciated the sense of humor of the man. Even the wrestler laughed and he said, “I have been fighting but I have never come across such a situation. I cannot sit on your chest and I hope the judges declare us equal.”

This man is not to be defeated, at any cost — such a playful and such a humorous man, who falls flat on the ground and says, “Now you sit on my chest and let the judges declare that you are victorious and I am defeated.”

I cannot forget that incident for the simple reason that even at the moment of defeat that man changed it into a victory — he was almost the winner. There was no anger and there was no question of being frustrated. He simply accepted the situation that he was not a wrestler and it was better to be sincere and honest. Why unnecessarily fight and get defeated? It would simply have been wrong for the other man to sit on his chest. It would have looked really ugly, insensitive. He had to say to the judges, “Declare us equal. This man is not the one to be declared defeated. I have learned much more from him than I have learned in so many fights in which I have been victorious or defeated. This has not been a fight at all, but such a great experience that one can take things at ease.”

Just start thinking about yourself at ease — nothing special; not that you are meant to be victorious, not that you have to succeed always in every situation. This is a big world and we are small people. Once this settles in your being then everything is acceptable. Anger disappears, and the disappearance will bring you a new surprise, because when anger disappears it leaves behind it tremendous energy of compassion, of love, of friendship.

Source – Osho Book “The Sword and The Lotus”