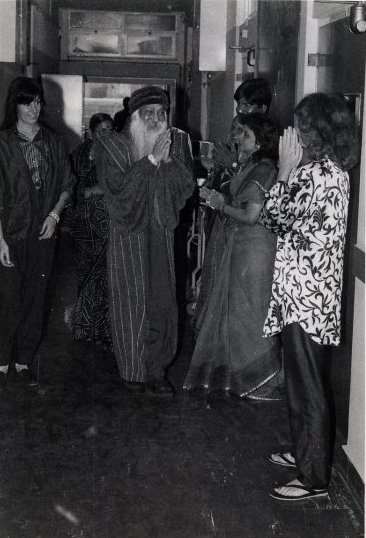 Question: What is your attitude toward Women? What should be the attitude of society towards Women? What is god and what does attaining god actually mean?

Osho : Let us first dispose God. There is no God, so the question of attaining him does not arise. Anybody who attains him, simply proves he is a crackpot. The woman is a far more important matter than God. The woman is in every way equal to man. In many ways she is a little superior, and that has become the problem for the poor woman — her superiority.

For example, man feels inferior — he cannot give birth to children, the woman can do that. Man’s part in it is negligible, just a syringe can do that. Man is not in any way essential for reproduction, and that feeling that woman can create life must have created a deep inferiority in man; and whenever there is inferiority, the effort is bound to be to reduce the other inferior to prove one’s self superior. And that’s what has been done down the ages, why women have been forced to be inferior in every possible way — no education, no religious education, no social mobility — in every way hampered, cut down, caged. It is out of fear of man.

But if you behave out of fear and destroy the freedom of woman, she also is going to react; and naturally she has become bitchy. We have turned all the women bitchy. They are all nagging — that is their way of torturing you. You have taken their freedom. In revenge, they are making you as frustrated and in despair as possible. So the whole humanity is living in an unnecessary anguish.

The first thing is the woman has to be completely freed, given all the opportunities that are given to man; and it should be accepted that she has few superiorities. For example, if one hundred ten boys are born, then one hundred girls are born — because ten boys die before the marriageable age, but those hundred girls stick. The boys have less resistance to disease than the girls. And to keep the balance, nature produces more boys and less girls — because by the time of marriage they are equal.

So those hormones can be given to man. In fact, there is no reason to feel inferior; just man and women are different. And if the differences are such that can be helped then it will be good to help each other.

And there are qualities which man has — he has a muscular body, more animal strength than the woman. He has more wider scope of thinking than the woman — the woman is more interested in the neighborhood, whose wife is flirting with whom, she’s more interested than she is interested in a far-away star, what is happening to it-who cares what has happened to it, let it happen! Somebody’s wife is escaping. Her scope of thinking is very closed. Man’s scope is very wide. They both can be supplemented to each other because both are needed.

It happened that one of the famous scientists, Archimedes, who was also an astronomer, one night, clear night, looking at the stars, was walking on the road and fell into a well. It was a lonely street — only a small hut. An old woman saved him. Archimedes said to the woman that, “You don’t know who I am. I am a great astronomer, a great scientist. Even kings from all over Europe come to learn and understand things with me, but as far as you are concerned you have saved my life, you can come tomorrow and I will look into your life chart and see what is in your future.”

The woman laughed. She said, “Forget all about it. You can’t see one feet ahead that there is a well. What you can see in the future?”

And certainly man is alone, just as woman is alone. Only together they become an organic whole. And that’s why I have so much respect for love, because love is the chemia(*) which makes man and woman one whole, they lose their individualities, their egos, and for the first time there is no man, no woman, just one energy; and that energy should be respected.