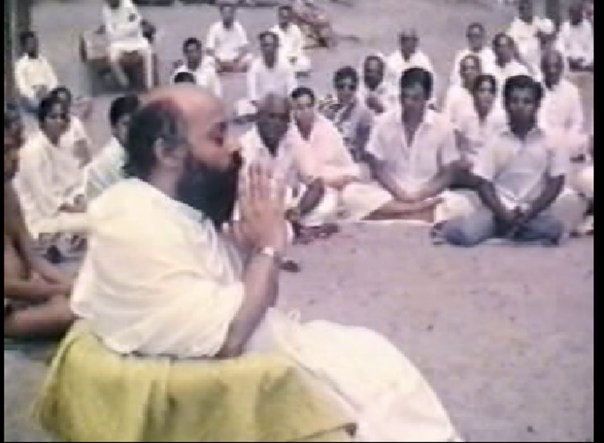 Osho – You will see lots of people doing bhajan, singing the song of the divine, but they are not really doing bhajan. They are doing it very superficially. It may be a sort of recreation for them as they have not staked their life. It may be just an enjoyment for them, and this type of enjoyment they can get from any other song or from any other music.

Bhajan means that there is a deep agony in your inner being; a sound arises from your inner depth. Your whole life is at stake as if it is a question of life and death. If you want to sing the song of the divine then you have to lose yourself. If you want to save yourself and to be devotional to Govinda, God, then you are deceiving yourself.

Bhajan in itself is the climax. It is the ultimate. The disciples of Ramakrishna used to be very careful that when he is walking on the road nobody should say “Ram Ram,” or “Jai Ram,” because even if a stranger saluted him by saying “Jairam-ji,” he would stand there overwhelmed with emotion and ecstasy and he would start dancing right in the middle of the road. The disciples used to be embarrassed. The policeman would arrive and tell them to clear the chaos on the road. If he was invited to some wedding then nobody would bother about the bride and the bridegroom and all of them would gather around him.

Once, one of his admirers had invited Ramakrishna to his daughter’s wedding so that he could give his blessings. The wedding ceremony was about to start when somebody called out the name of Govinda. There was a big crowd and somebody was shouting, “Where is Govinda?” Ramakrishna heard the name of Govinda and started dancing, and the bhajan of Govinda started! That wedding place changed into a divine scene. The marriage party was no longer a marriage party. The wedding ceremony was no longer a wedding ceremony; it was altogether a different thing.

Bhajan means that there is a constant flow of the remembrance of the divine within you twenty-four hours a day. That constant flow was there within Ramakrishna, so when anyone uttered the name of Ram, Krishna or Govinda, the inner flow would erupt. The slightest outer stimulus would reveal the inner dance, the inner music, the inner sound. It is just like a well which is full of water. If somebody puts the bucket in the well, it will come out full of water. In the same way, if someone uttered the name of Ram, the inner bhajan, the inner remembrance would be expressed outwardly.